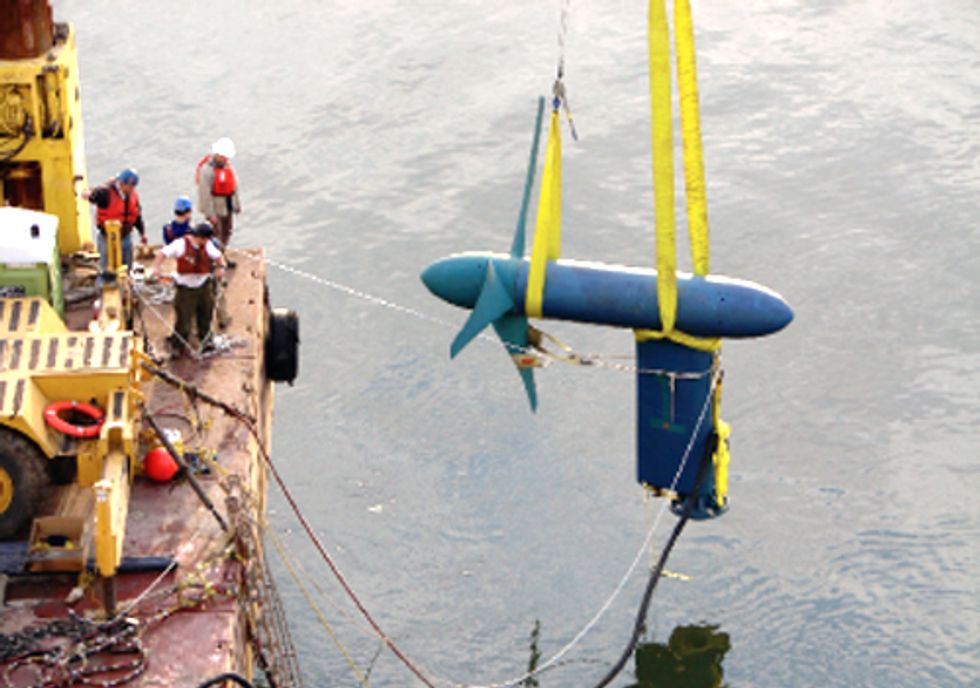 New hydrokinetic energy technologies that generate electricity by harnessing the energy from ocean waves, tides and river currents are advancing toward commercial development in the U.S. They are not expected to add major power supplies anytime soon, but federal regulators this year approved licenses for two hydrokinetic energy projects to produce electricity from wave power buoys anchored off the Oregon coast and from underwater turbines driven by the current in New York City's East River.

Hydrokinetic energy is still in its infancy in the U.S. Current prices make hydrokinetic energy expensive compared to other fuels for power generation. However, backers of the technology claim river currents and ocean tides are more predictable, sometimes known months in advance, for generating electricity compared to intermittent energy sources such as wind and solar. Various hydrokinetic technologies are available, including:

Verdant Power's Roosevelt Island Tidal Energy Project, approved by the Federal Energy Regulatory Commission (FERC) in January 2012, plans to install up to 30 three-blade hydrokinetic generators on the bottom of New York City's East River to produce about 1 megawatt of electricity, enough to power around 800 homes. After initial problems resulting from strong river currents, the company has successfully tested new blades made of plastic and fiberglass.

Ocean Power Technologies' Reedsport Wave Park power station, approved by FERC in August, will consist of up to ten large buoys that collectively could generate 1.5 megawatts (MW) of electricity from the movement of waves. The power wave station will be located 2.5 miles off the Oregon coast and will be connected to the electric grid by an underwater cable. Construction of the initial buoy is nearing completion and is expected to be ready for deployment later this year.

While U.S. hydrokinetic projects are small—dwarfed by the 77,000 MW of existing conventional hydroelectric generating capacity—the sector is developing. So far, FERC has issued 93 preliminary hydrokinetic energy project permits. In July 2012, FERC and the Department of the Interior's Bureau of Ocean Energy Management updated their agreement to streamline the process for licensing and regulating wave and ocean current energy projects.

Other countries have tapped hydrokinetic energy for years, although some of the technology used is not as advanced as what is being tried in the U.S. The 240 MW La Rance barrage dam in France was the world's first tidal power station. Opened in 1966, the plant has 24 turbines that generate electricity when the tide goes in or out. The Sihwa Lake Power Station in South Korea began operating last year and is the world's largest tidal power station, with a generating capacity of 254 MW. There is also the Annapolis power plant at the Bay of Fundy in Canada that was built in 1984 and generates 20 MW of electricity from the Bay's record 43-foot tides.

More advanced technology used internationally includes the Pelamis "sea snake," an offshore machine consisting of five tube sections that float on the ocean surface and use the motion of waves to generate electricity (see images above). When the tube sections flex, hydraulic arms move in opposite directions and turn a generator that produces power. Sea snakes are being tested in Scotland and Portugal.

The U.S. Department of Energy has a database that tracks hydrokinetic energy projects in various stages of development around the world.