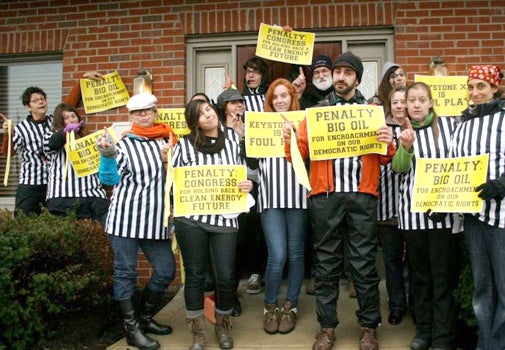 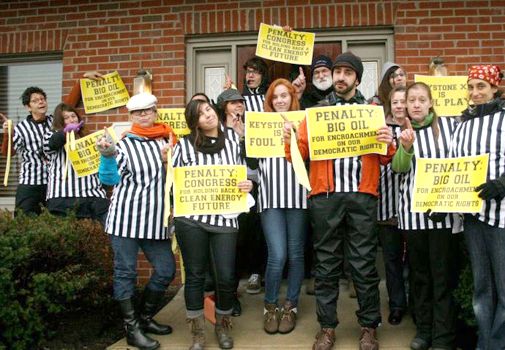 It’s become clear that Speaker of the House, John Boehner, is more interested in filling his pockets with dirty energy’s money than in representing his constituents and ensuring ecological and economic security for Americans (and the rest of the planet). So yesterday morning, a group of twenty citizen referees braved the cold and rain to pay his district office in West Chester, Ohio a visit and call foul on his dirty dealings. The office, which is supposed to be open Monday-Friday during normal business hours, was mysteriously closed with no explanation on the door or their answering machine as to why. I guess the Speaker doesn’t like being called out for blatant corruption.

Rep. Boehner (R-OH) has taken over 1.1 million dollars from the fossil fuel industry and in turn fights tooth and nail for their interests and against the interests of the American people and the planet. The Speaker invested hundreds of thousands of dollars in Big Oil companies involved with dirty Tar Sands extraction. He then held the payroll tax extension hostage to expedition of the Keystone XL pipeline decision, and is threatening to hold it hostage again to the pipeline’s approval. Holding solutions to the climate crisis and relief for the struggling middle class hostage in order to advance his own financial interests is an egregious abuse of the Speaker’s power.

So climate and Occupy activists teamed up in West Chester yesterday to blow the whistle on the Speaker’s corruption. It’s a natural fit for our movements to work together. Occupy is out to end corporate domination of our public policy-making process and obstruction of our democratic rights—to create a level playing-field where we the people have a say in our economic, political and cultural destiny. The climate movement has long had to deal with obstruction of solutions to one of the greatest threats humanity (and all other living species on the planet) has ever faced, by the wealthiest and most powerful industry on Earth. Our struggles are one: end the collusion and corruption that has essentially replaced American democracy with American oligarchy. Establish true democracy in which the voices of the 99% calling for economic justice are heard over the checks flying into representatives pockets from Goldman Sachs and the voices of 99% of the world’s scientists calling for an emergency response to the climate crisis are heard over the bribes from fossil fuel industry lobbyists.

Dressed up in referee uniforms and literally blowing whistles and throwing penalty flags, we headed to Speaker Boehner’s district office in West Chester, but when we got there the door was locked. We looked inside and could see that no one was home. It was 11am on a Thursday and their morning paper was still on the ground in front of the door. The office is supposed to be open Monday through Friday, except on federal holidays—that’s why our tax dollars are paying for this office. This is supposed to be a representative democracy in which we the people are afforded our right to lobby our representatives without having to travel all the way to Washington D.C.—that’s the purpose of Rep. Boehner’s district office. It concerned us that the office was closed for no apparent reason. It was an insult to the whole of Boehner’s constituency.

But then again, the Speaker has already shown us time and time again, most recently through his scheming to push through the Keystone XL pipeline against the will of a vast, diverse movement opposed to the destructive project, that he’s perfectly happy to ignore the interests of the American people and to shill for Big Oil and Big Money instead. So why would he want to keep his district office open if he has no respect for real democracy and isn’t going to work for his constituents anyway?

We call foul on Boehner and Big Oil for obstruction and corruption of our democracy and we’ll keep blowing the whistle on them and other members of congress who sell us out. We’ll keep growing this movement and organizing our communities and we won’t stop until we see an end to the corruption, an end to the billions in government handouts to the fossil fuel industry, an end to the selling out of our voices and our votes, an end to the destruction of our global climate system, an end to holding back our clean energy future, an end to the struggling of the many so that the few may prosper.

This is our democracy and our future, and we’re taking it back!

Stay in touch with 350.org Ohio by joining our Facebook page.