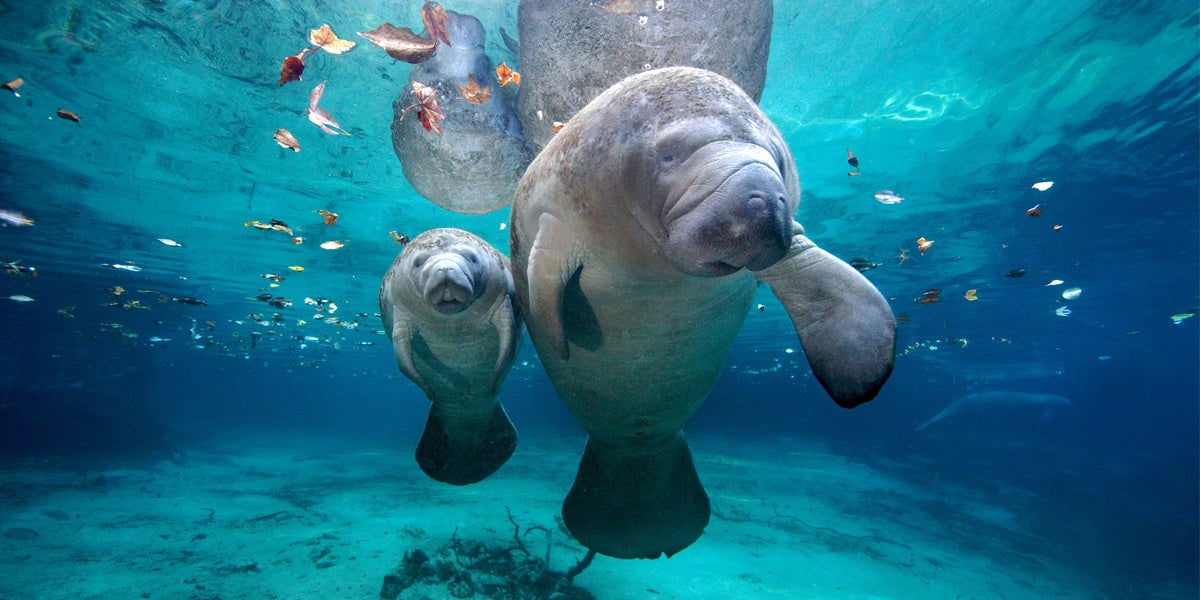 2018 has not been a good year for Florida’s iconic
manatees. A total of 540 sea cows have died in the last eight months, surpassing last year’s total of 538 deaths, according to figures posted Monday by Public Employees for Environmental Responsibility (PEER).

The figure will likely climb higher before the year’s end amid the state’s ongoing
toxic algae crisis. The red tide in the state’s southwest is the known or suspected cause of death for 97 manatees as of Aug. 12, the Florida Fish & Wildlife Conservation Commission recently reported.

Combined with the winter cold spell, which claimed 69 manatees, more than 10 percent of the state’s estimated manatee population of around 6,300 individuals could be wiped out this year, PEER noted.

The 540 reported deaths is also the second highest total in a decade. The deadliest year on record was 2013, when 830 Florida manatees perished. A third of those deaths were also linked to red tide. 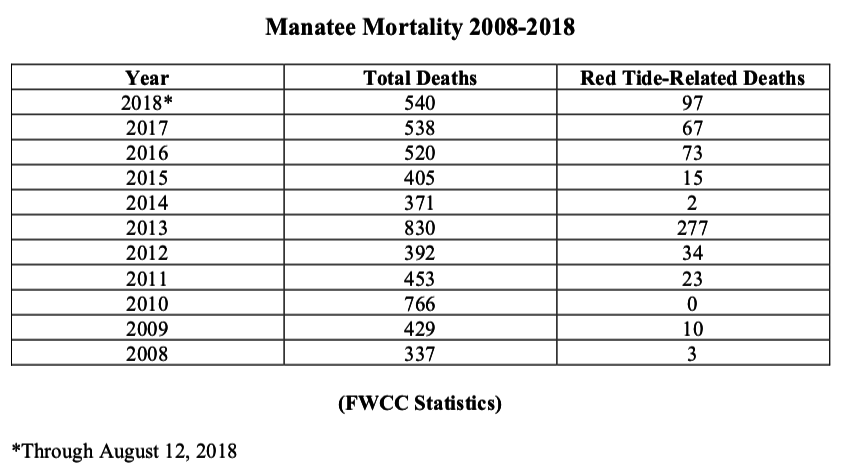 Other threats to the gentle giants include blue-green algal blooms along Florida’s east coast as well as boat strikes, which resulted in 75 manatee deaths, according to
Save the Manatee Club.

“Florida’s manatees have no defense against this ecological disaster,” said PEER Executive Director Jeff Ruch in a statement, noting that red tides and algal blooms poison both manatees and their food supplies. “Florida’s steadily declining water quality is a death warrant for the manatee.”

Red tide, which is caused by the Karenia brevis organism, is a natural phenomenon but some have blamed climate change for worsening the crisis, as well as mining and agricultural practices that can cause excess nutrients to flush into the waters.

In a
press release Monday, PEER said it has documented a “precipitous decline in water pollution enforcement under Governor Rick Scott, as well as the massive amounts of phosphorus and other nutrients discharged daily both legally and illegally into Florida’s waters.”

“The increased duration, scale, and toxicity of red tide and algal bloom events should be an eco-wakeup call for Florida,” Ruch added. “Governor Scott has
declared a red tide emergency but the role his own environmental policies have played in spawning this crisis deserves examination.”

Last year, the West Indian manatee was downlisted from “endangered” to “threatened” by the U.S. Fish and Wildlife Service (FWS). Conservationists felt that the downgrade came too soon.

“We believe this is a devastating blow to manatees,” Patrick Rose, executive director of
Save the Manatee Club, said in a statement then. “A federal reclassification at this time will seriously undermine the chances of securing the manatee’s long-term survival. With the new federal administration threatening to cut 75 percent of regulations, including those that protect our wildlife and air and water quality, the move to downlist manatees can only be seen as a political one.”

Save the Manatee Club said that FWS “failed to adequately consider data from 2010 to 2016, during which time manatees suffered from unprecedented mortality events linked to habitat pollution, dependence on artificial warm water sources, and record deaths from watercraft strikes.”

Florida’s deadly red tide started nine months ago and has become the state’s longest on record since 2006. Besides manatees, the outbreak has killed scores of marine life, including countless crabs, eels and fish, hundreds of endangered
sea turtles, potentially a whale shark and 11 bottlenose dolphins.