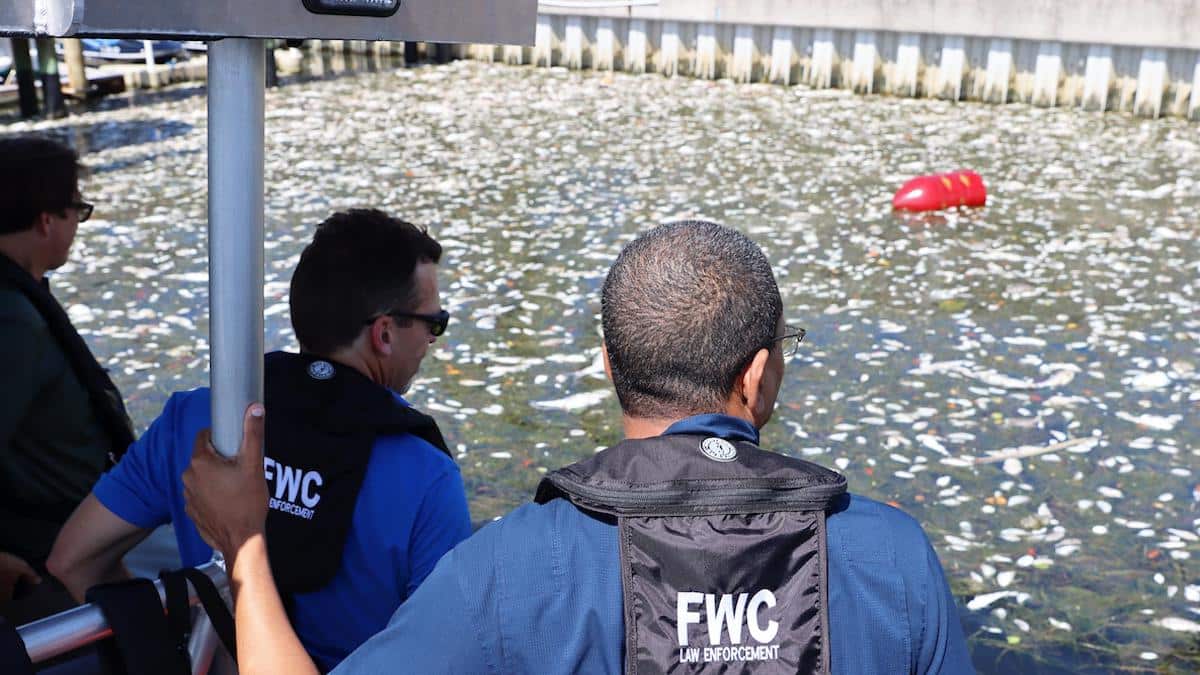 The solid waste division of Pinellas County, where Tampa Bay is located, said they had picked up 600 tons of dead marine life since late June, as NPR reported.

“The bay is really hurting right now,” Pinellas County resident Maya Burke told NPR. “It’s significant numbers of dead fish all up and down the food chain, from small forage fish all the way up to tarpon, manatees, dolphins… If it’s swimming in the bay, right now it’s washing up dead.”

The devastation prompted more than 100 protestors to march along the St. Petersburg waterfront on Saturday, as The AP reported. The demonstrators called on Republican Gov. Ron DeSantis to declare a state of emergency in order to provide funds to address the problem.

“This is not political,” protest organizer Aimee Conlee said at the demonstration, as The AP reported. “This is life. This is water, and water is life.”

The St. Petersburg City Council backed the call with a resolution passed last week, but DeSantis has said there is enough funding available from the state’s Department of Environmental Protection without a declaration.

Red tides are caused by an overabundance of the algae Karenia brevis, The Smithsonian explained. This algae is naturally occurring in the Gulf of Mexico, but is made worse by nutrient pollution, according to The AP. It is unusual for these blooms to occur in Tampa Bay during the summer months, NPR reported. Instead, they typically begin in the fall and end by January. The last serious summer red tide was in 2018, and this year’s outbreak looks to be worse.

“This is not normal,” NOAA oceanographer Richard Stumpf told NPR. “The fact that it’s been three years since the last one is not good.”

The outbreak comes around three months after a major leak at a phosphate plant wastewater pond located in a Piney Point reservoir near Tampa Bay. Experts say pollutants from the leak could be worsening the tide, but are unlikely to be its original source.

“I don’t think that the red tide was originated as a consequence of Piney Point,” Tom Frazer, Florida’s former chief science officer and a professor and dean at the University of South Florida College of Marine Science, said in a public discussion reported by WUSF. “One of the things that we saw with the red tide early on was that it was south of the discharge area, with the red tide continuing to kind of migrate or move northward into lower Tampa Bay.”

He said that other sources of the outbreak could be runoff from septic tanks, stormwater systems and agricultural or lawn fertilizer.

The number of fish washing up dead on the beach could also have been increased by winds from Tropical Storm Elsa earlier this month, according to NPR. Pinellas County and St. Petersburg officials said they removed nine tons of fish in a 24-hour period following the storm, according to The Independent.

Red tides can also harm human health by worsening the effects of asthma and other respiratory conditions. Scientists warn these events may get even worse because of the climate crisis, since warmer waters favor the algae and more extreme precipitation events increase runoff and nutrient pollution.

“Because of climate change, we are at a crossroad with regard to control of harmful algal blooms, and must aggressively tackle the problem before it becomes so difficult that in many ecosystems we are faced with the option of allowing these micro-organisms to go unchecked,” experts warned in a 2015 letter published in Environmental Science & Technology.