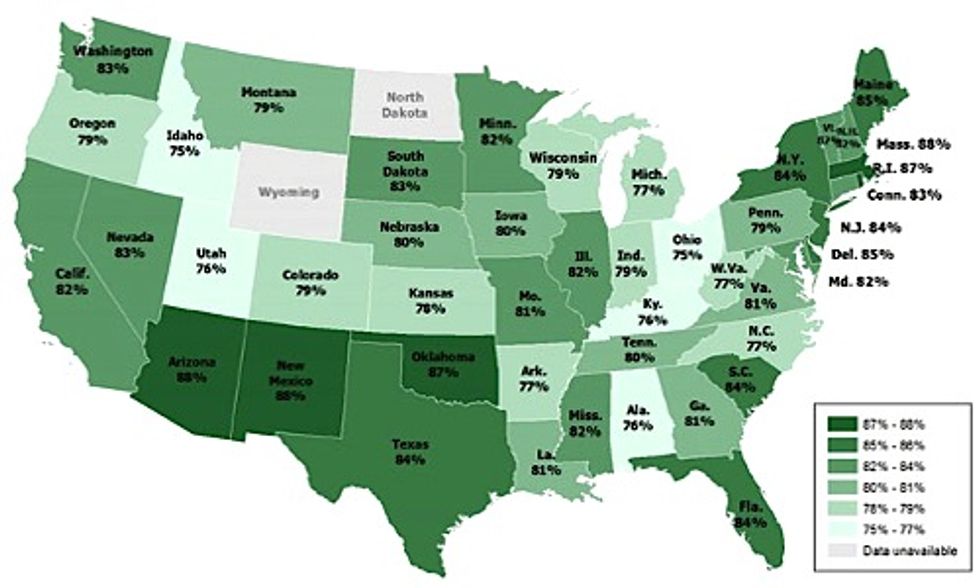 While politicians often assume that people in "red" and "blue" states have very different ideologies regarding climate change, an analysis of surveys measuring Americans' opinions tells a different story.

Jon Krosnick, a senior fellow with the Stanford Woods Institute for the Environment, presented the findings today in Washington to the congressional Bicameral Task Force on Climate Change.

Majorities of residents in every state surveyed said the government should limit greenhouse gas emissions by businesses and, in particular, by power plants, Krosnick said. Majorities also favored a cap-and-trade system to limit emissions; tax breaks to encourage the production of energy from the sun, wind and water; carbon sequestration; and government regulations or tax breaks to require or encourage improvements in the energy efficiency of automobiles, appliances and buildings. No state had a majority of residents opposed to any of those policies.

"The consistency of findings across states was surprising to me," said Krosnick, a professor of communication and political science, who worked with Woods Institute visiting scholar Bo MacInnis on the project. "I have often heard legislators in Washington express the belief that there is considerable variation in opinions about global warming across parts of the country, and that most of the people living in their state or district are skeptical about global warming."

"When I ask about the polling they have done that led them to this belief, I have routinely been told that they had not done polling and, instead, base their impressions on phone calls, emails and conversations with and from constituents on the issue," Krosnick continued. "Our findings suggest that the balance of those direct communications from constituents to elected representatives may have created a misimpression of the public's opinions on the issue."

Krosnick reached these conclusions by conducting what social scientists call a "secondary analysis" of existing data from national surveys that measured public opinion in nearly every state on various issues related to global warming. He added data collected in surveys of representative samples of residents in a collection of states. The 21 surveys analyzed (mostly by Stanford) were primarily conducted between 2006 and 2013. Data from 19,751 respondents were analyzed. Four states had insufficient data: Alaska, Hawaii, North Dakota and Wyoming.

Findings from Krosnick's analysis include:

The statistical modeling procedure estimated differences in opinions between states while taking into account the effects of each survey mode (e.g., telephone interviewing vs. self-completion of Internet questionnaires) on expressed opinions, differences between results obtained by different data collection firms and sponsored by different organizations, the effects of the season when the survey took place, and other factors. The results of the statistical modeling were measurements of opinions in each state in 2012-13 gauged via random-digit-dialed telephone surveys sponsored by Stanford.