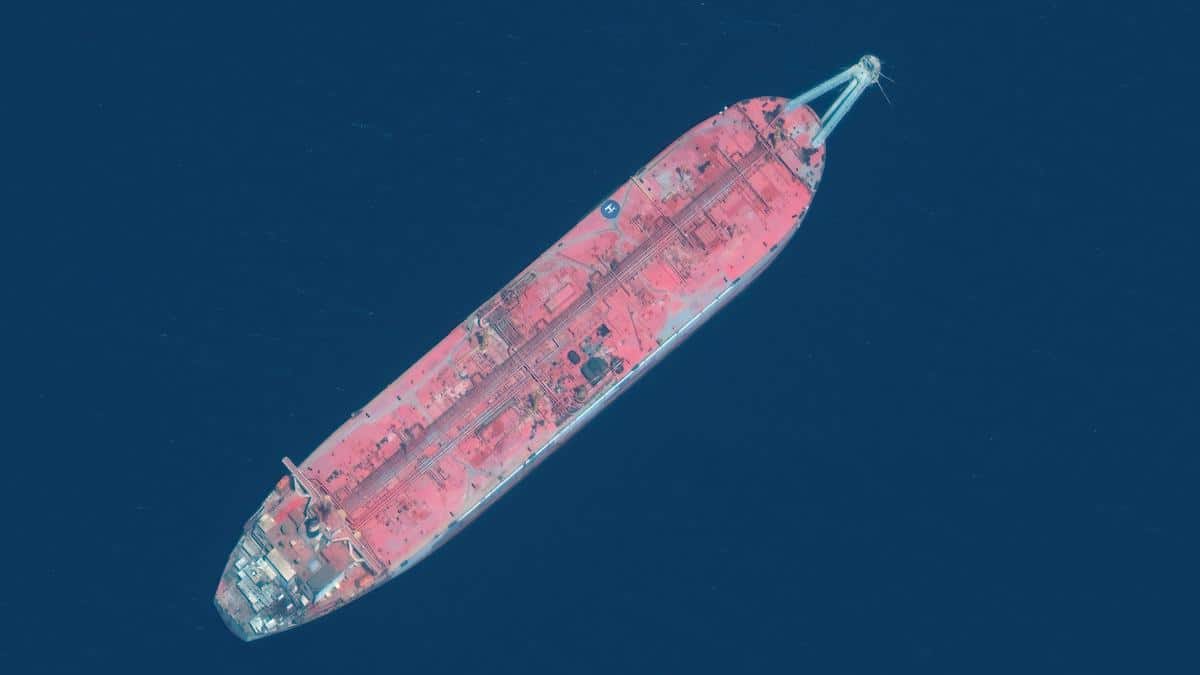 An abandoned supertanker holding more than one million barrels of crude oil has been slowly corroding off Yemen’s coast, and a new study out Monday warns that the consequences of an “imminent” spill in the Red Sea could be graver than initially thought — cutting off access to clean water and food aid for millions of people in a matter of days and completely decimating the region’s fishing stocks within three weeks.

“The possibility of a massive oil spill in the Red Sea is increasingly likely,” write the authors of the peer-reviewed paper, published in the journal Nature Sustainability. “The Safer, a deteriorating oil tanker containing 1.1 million barrels of oil, has been deserted near the coast of Yemen since 2015 and threatens environmental catastrophe to a country presently in a humanitarian crisis.”

In their analysis of “the immediate public health impacts of a simulated spill,” the scholars estimate that “all of Yemen’s imported fuel through its key Red Sea ports would be disrupted and that the anticipated spill could disrupt clean-water supply equivalent to the daily use of 9.0–9.9 million people, food supply for 5.7–8.4 million people, and 93–100% of Yemen’s Red Sea fisheries.”

The new study models the anticipated health effects of a spill — under various seasonal conditions and cleanup scenarios — over the course of three weeks.

The researchers write that “ports and desalination plants, crucial for providing fuel, food, and water, stand to be disrupted by the spill. We estimate that two weeks after a spill, Yemen’s key ports of Hudaydah and Salif will likely be directly impacted.”

“The spill and subsequent port closures will disrupt maritime transport across the Red Sea, rerouting many shipments around Africa,” the paper says. “We expect fuel prices in Yemen to spike as a consequence.”

The daily clean water supply for an estimated 1.0-1.9 million people would be threatened if desalination plants are contaminated, while another eight million people could lose access to running water if the spill closes ports, causing fuel shortages that shut down fuel-powered pumps or water trucks.

Moreover, hunger would be exacerbated by food aid disruptions and fishery closures.

“In the event of Yemen’s Red Sea ports closing within two weeks of the spill, food aid will be disrupted for an estimated 5.7 (3.7–8.1) million people who currently require food assistance,” according to researchers, who estimate that “if Aden’s port also closes, a total of 8.4 (5.4–11.9) million people will not receive food aid.”

Within one week, two-thirds to 85% of Yemen’s Red Sea fisheries would be jeopardized, and within three weeks, that figure would surge to 93% to 100%, “depending on the season,” the paper states.

The researchers “also estimate an increased risk of cardiovascular hospitalization from pollution ranging from 5.8 to 42.0% over the duration of the spill.”

“The public health impacts of a spill from the oil tanker Safer are expected to be catastrophic, particularly for Yemen,” the scholars write, adding:

Disruption of fuel imports is anticipated to shut down hospitals and essential services, at a time when Yemen already faces fuel shortages and only 50% of its health services are functional. Both fuel shortages and contamination of desalination plants are expected to worsen an existing water crisis, potentially leading to a resurgence of water-borne infectious diseases. Disruption to food aid would probably increase food prices and exacerbate an ongoing famine. The spill threatens to disrupt nearly all of Yemen’s Red Sea fisheries, which would worsen food security and exacerbate Yemen’s displacement crisis as workers seek new employment. Imports of medical supplies from aid groups would probably also be disrupted, further destabilizing health services.

Although “the long-term and global impacts of the spill” lie outside the scope of the analysis, the researchers acknowledge that they “are also potentially severe.”

“Ecological and environmental impacts through wildlife endangerment and coastline contamination from large oil spills can persist for years or decades,” the study points out. “In particular, the spill threatens the Red Sea coral reefs, studied for their unique resilience to seawater warming.”

In addition, “the spill could hinder global trade through the vital Bab el-Mandeb Strait, 29 kilometers wide at its narrowest point, through which 10% of the global shipping trade passes,” the paper states. “Exclusion zones created for cleanup could reroute traffic, and shipments will be delayed as ships potentially exposed to oil will require cleaning.”

“Our results stress the need for urgent action to avert this looming disaster,” the authors note.

As the paper details: “The visibly dilapidated Safer is single-hulled, meaning a breach will cause the onboard oil to spill directly into the sea. Water entered the engine room in May 2020 through a seawater-pipe leak, and the vessel’s fire extinguishing system is nonoperational. A spill could occur due to a leak or combustion. A leak could arise through continued deterioration of the vessel’s hull or by breach of the hull due to inclement weather; combustion could occur through build-up of volatile gases aboard the vessel or direct attack on the vessel.”

However, researchers emphasize, “the spill and its potentially disastrous impacts remain entirely preventable through offloading the oil.”

According to The Guardian, “Negotiations are underway” to unload the vessel, which is carrying four times the amount of oil released during the Exxon Valdez disaster in the Gulf of Alaska in 1989.

Despite numerous warnings about the life-threatening dangers posed by the decaying tanker — including one made last June by the head of the United Nations Environment Program to the UN Security Council — efforts to offload oil from the “massive floating time bomb” have stalled.

“Three-way talks between the Houthi rebels, the UN-recognized government of Yemen, and the UN have foundered,” The Guardian reported. “UN officials have been unable to secure guarantees to maintain the vessel, including its rotting hull, which is now overseen by a crew of just seven.”

“The UN has been seeking Houthi permission to inspect the ship,” noted the British newspaper, “but the Houthis want undertakings that the vessel will also be repaired, an exercise that requires money the UN does not have available.”