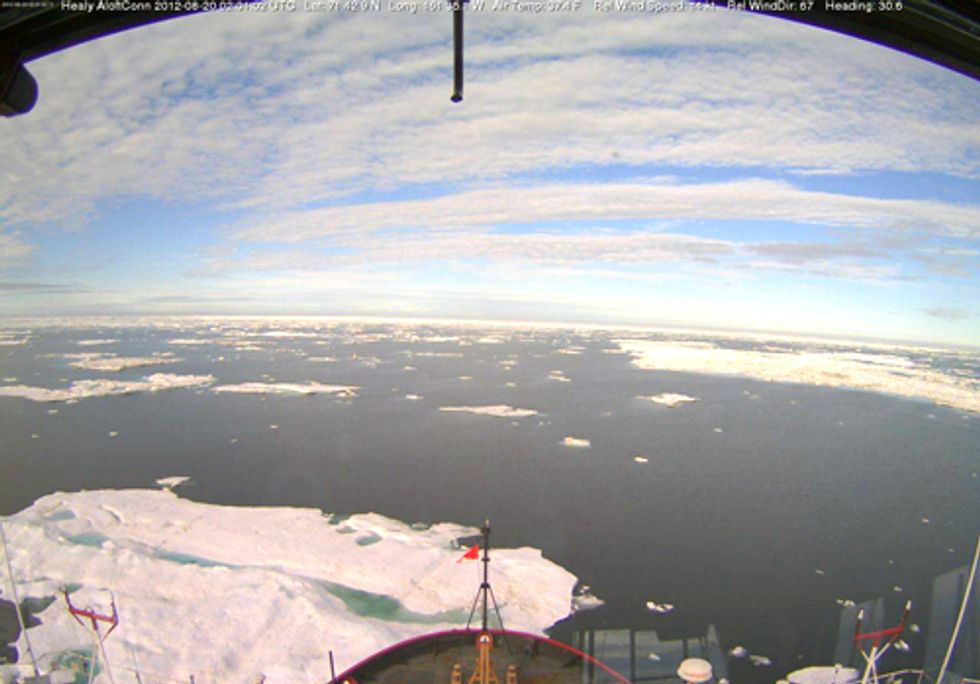 Scattered ice floes are seen from the bridge of the USCGC Healy on August 20, 2012 northwest of Barrow, Alaska. Arctic sea ice fell to its lowest daily extent in the satellite record on Sunday, August 26, 2012. Photo credit: U.S. Coast Guard.

In the last month, scientists have noted a series of alarming events, all of which indicate the significant effects climate change is having on the planet.

Yesterday, the National Snow and Ice Data Center (NSIDC) announced that the Arctic sea ice cover was at its lowest level since the satellite record began in 1979. Earlier this month Australian scientists found concrete evidence of "very unusual warming" over the last hundred years in Antarctica. And in July, 97 percent of Greenland's ice sheet melted, an event that received little coverage in the American news media.

According to the NSIDC's official statement on the record low level of Arctic sea ice:

Arctic sea ice follows an annual cycle of melting through the warm summer months and refreezing in the winter. While Arctic sea ice extent varies from year to year because of changeable weather conditions, ice extent has shown a dramatic overall decline over the past thirty years. The pronounced decline in summer Arctic sea ice over the last decade is considered a strong signal of long-term climate warming.

In response to the news from the NSIDC, Rep. Ed Markey (D-Mass), the top Democrat on the Natural Resources Committee and co-author of the only climate bill to pass a chamber of Congress, released a statement saying that it's time for the Republican leadership in Congress to stop opposing all efforts to limit pollution and combat climate change.

"Republicans blocked legislation that would put a cap on the pollution that is warming the planet, and now we are losing more of our Arctic ice cap just a few years later. Drought is devastating the United States, a hurricane is bearing down on the Gulf and we have just experienced the hottest 12 months in the United States in recorded history. The time for climate action is now,” said Rep. Markey.

With Arctic ice levels at a record low, a delegation of Australian scientists has also found evidence of what they termed "very unusual warming" in the Antarctic over the last 100 years. Scientists drilled 364 meters into the Antarctic ice to complete the first ever comprehensive temperature record of the Antarctic Peninsula. The 364 meter ice core was then used as a time capsule showing temperature conditions over the many thousands of years age of the core.

What the scientists found was that Antarctica has experienced dramatic increases in temperature over the last 100 years. According to Dr. Nerilie Abram from the Australian National University, “The main finding of our research is that warming as fast as this is very unusual. We should be very concerned about that.”

This all comes on the heels of the dramatic news from July that 97 percent of Greenland's ice sheet had melted. Even extremely cold high-elevation areas experienced some degree of melting. Such a widespread melt was unprecedented in the observational record, which dates back to about 1930. According to William Colgan, a research associate at the Cooperative Institute for Research in Environmental Sciences at the University of Colorado, "It is clear that entire ice sheet melt events are now increasing in frequency as a result of anthropogenic [manmade] climate change, rather than natural variability in solar insolation.”

A study by professor Mark Tedesco, whose work was sponsored by NASA and the National Science Foundation, concluded that record ice melt in the Greenland was consistent with the modeled effects of climate change, but “the difference is how quickly this seems to be happening.” Events such as the melting in Greenland and in the Arctic sea further accelerate global sea level rise, which threatens coastal ecosystems and human populations.

Last month, Bill McKibben, founder of 350.org, had a feature piece in Rolling Stone Magazine that outlined the daunting reality of climate change and global warming based on three simple numbers that add up to global catastrophe. Last week McKibben was interviewed by Mike Papantonio on Ring of Fire radio and provided his insights on the extreme weather the world has been experiencing.