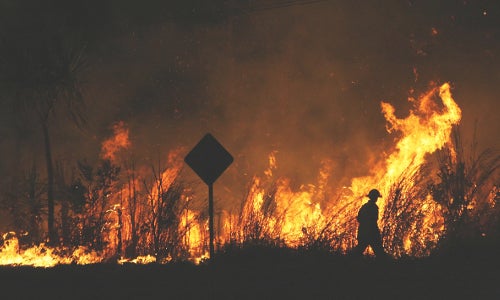 Australians have good reason to dread the coming of January. It’s the peak of the summer season downunder. In recent years, global warming, driven by climate change, has caused temperatures there to soar to record levels. 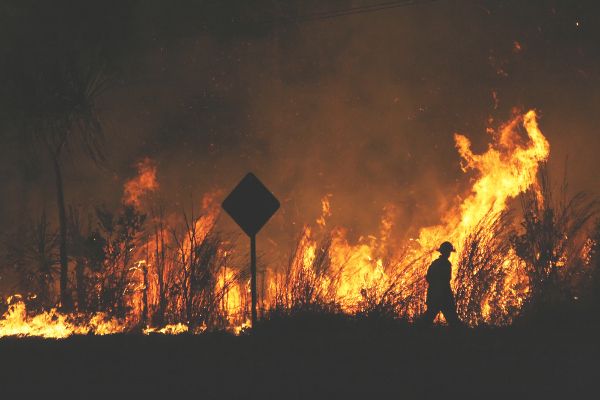 More wildfires are only one of the many impacts of climate change in Australia.

With temperatures reaching highs of nearly 112 degrees Fahrenheit in some places, wildfires are blazing, hiking trails are being closed, trains are being required to run at slower speeds, and even the Internet is shutting down. It got so hot in Perth—the sixth hottest day on record—that Perth-based Internet provider iiNet went offline Monday, leaving fuming customers across Australia disconnected for six and a half hours.

“Due to record breaking temperatures in our Perth data centre earlier today, we shut down our servers as a precautionary measure,” said an iiNet spokesman. “Although redundancy plans ensured over 98 percent of customers remained unaffected, some customers experienced issues reconnecting to the internet. These issues have now been resolved.”

Naturally, users vented at online forums and on Twitter. Some offered their own complicated theories about what went wrong and what the company should have done, griping about the company’s customer service or complaining about the complainers with posts like “Hahahahahahaha I love how whingey people get over this. How many of you are paying for services with 99.9999 SLA’s? Not many I’d assume. Geez.”

My ISP @iiNet is down because it’s too hot (44C) at their servers. That’s the most Australian thing I’ve heard. Too hot for Internet.

In South Australia, a wildfire was raging out of control, something that’s becoming an annual occurrence. But this wildfire was said to be the worst in decades. More than 375 firefighters battled a fire in the hills northeast of Adelaide in temperatures well over 100 degrees. The fire, burning for nearly a week now, closed hospitals and caused thousands of people to flee their homes as officials declared a major emergency. South Australian Premier Jay Weatherill told residents, “If you’ve decided to stay, you need to be aware that the fire will become incredibly scary and could lead you to change your mind at some point. It could be a catastrophic decision for you to leave late.”

The Insurance Council of Australia has declared a Catastrophe for the South Australian bushfires, giving loss claims in that area priority. And while wildfire is an annual summer occurrence in Australia, they’re getting worse, thanks to manmade climate change-caused heat waves and dry conditions, and they’re encroaching on more populated areas. While rain is expected this week, it’s unclear whether they will be of any help, given the potential for gusting  winds and continued high temperatures.

The heat wave comes just as the Australian Bureau of Meteorology is reporting in its Annual Climate Statement that the country had its third hottest year ever in 2014, following the hottest on record in 2013. Its second hottest was 2005.

“Nationally, Australian temperatures have warmed approximately one degree since 1950, and the continued warmth in 2014 adds to this long-term warming trend,” the bureau’s statement said.

Statistics to date on #SAFires. It is currently 95% contained. pic.twitter.com/nrEZBq54w7