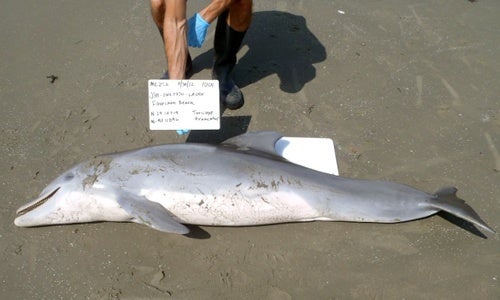 It was more than five years ago when the Deepwater Horizon offshore oil rig in the Gulf of Mexico blew out, spewing an unknown amount of oil. The April 2010 accident was the worst oil spill to ever occur in U.S. waters and it had far-reaching impacts on the region’s economy and ecosystems that continue to this day. 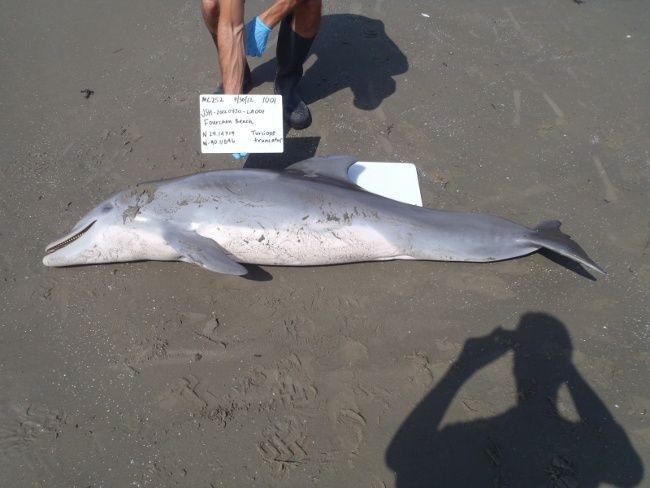 Now a newly released study, funded by the Deepwater Horizon National Resource Damage Assessment, which includes the National Oceanic and Atmospheric Administration (NOAA), National Fish and Wildlife Foundation, BP (the oil company responsible for the spill and others) details the disastrous impact for the spill on the health and mortality of dolphins in the Gulf.

The study, with the very scientific name of Adrenal Gland and Lung Lesions in Gulf of Mexico Common Bottlenose Dolphins (Tursiops truncatus) Found Dead following the Deepwater Horizon Oil Spill, analyzes what it calls “an unusual mortality event (UME)” among dolphins off the coast of Louisiana, Alabama and Mississippi between February 2010 and 2014. More than 1,300 dolphins are estimated to have died.

“The Deepwater Horizon oil spill was proposed as a contributing cause of adrenal disease, lung disease and poor health in live dolphins examined during 2011 in Barataria Bay, Louisiana,” said the study. It also analyzed dead dolphin carcasses stranded in the three states between June 2010 and December 2012 and compared the analyses to dead, stranded dolphins found outside the area or prior to the oil spill to come to the conclusion that the die-off was unprecedented and the result of an adrenal gland condition never previously seen in dolphins in the region that made them susceptible to pneumonia.

“The rare, life-threatening and chronic adrenal gland and lung diseases identified in stranded UME dolphins are consistent with exposure to petroleum compounds as seen in other mammals,” the study concluded. “Exposure of dolphins to elevated petroleum compounds present in coastal Gulf of Mexico waters during and after the Deepwater Horizon oil spill is proposed as a cause of adrenal and lung disease and as a contributor to increased dolphin deaths.”

“Animals with adrenal insufficiency are less able to cope with additional stressors in their everyday lives, and when those stressors occur, they are more likely to die,” said Dr. Stephanie Venn-Watson, the study’s lead author and veterinary epidemiologist at San Diego’s National Marine Mammal Foundation.

“No feasible alternatives remain that can reasonably explain the timing, location and nature of this increase in death,” Dr. Venn-Watson said. 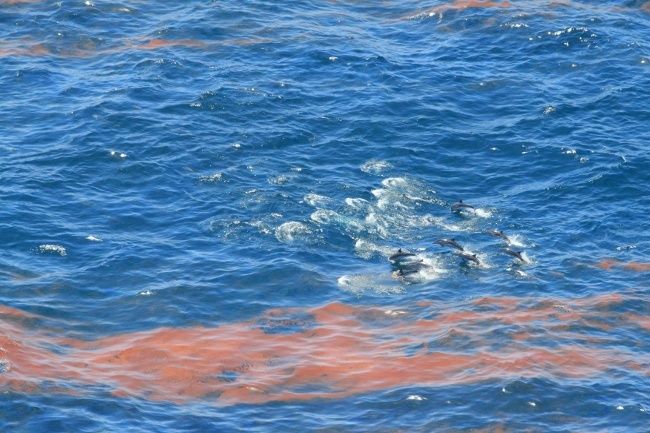 Dolphins swim through oil in the Gulf of Mexico. Photo credit: NOAA

But BP is still adamant that the oil spill did not contribute to the dolphin deaths.

“The researchers suggest that multiple factors likely contributed to the UME,” the company insisted in February, referring to a previous, preliminary study. “It’s important to note that unfortunately these large die-offs of dolphins aren’t unusual. Over the past years there have been dolphin UMEs relating to dolphins all over the world, with no connection to oil spills. The Barataria Bay health assessment mentioned in the paper failed to establish a link between the observed health of the Barataria Bay dolphins in 2011 and 2013 and potential exposure to oil.  It also failed to take into account that Barataria Bay contains numerous stressors that could explain the poor health of some dolphins.”

While there had been previous dolphin die-offs in the Gulf, none lasted as long or killed nearly as many animals. The post-Deepwater Horizon die-off claimed three times as many animals and lasted more than three times longer than any previous incident. BP has pointed to the fact that the Gulf dolphin studies noted a die-off that began in February 2010, nearly three months before the oil spill. However, that die-off claimed only about two dozen animals.

Despite the new, more compelling evidence, BP continues its denial. Following the release of the study, BP America Senior Vice President Geoff Morrell told PBS NewsHour, “This new paper fails to show that the illnesses observed in some dolphins were caused by exposure to Macondo oil. Even though the UME may have overlapped in some areas with the oil spill, correlation is not evidence of causation.”