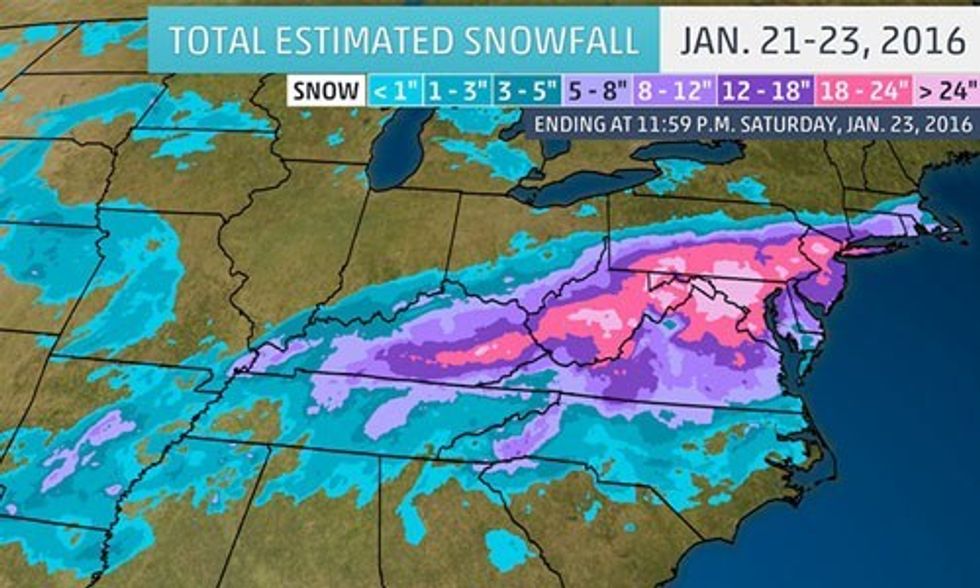 A ferocious, long-lasting winter storm took its parting swipes at the Eastern Seaboard on Saturday night, leaving in its wake a pile of snowbound cities and shattered records. Millions of people in the nation's most densely populated urban corridor saw snowfall amounts that matched or exceeded the largest amounts observed in more than a hundred years of recordkeeping. It's surprisingly difficult to measure snow in an accurate and consistent way, so you should keep a mental asterisk pinned to the statistics you'll be seeing. Nevertheless, there is no question that this nor'easter, dubbed Winter Storm Jonas by the Weather Channel, was one for the ages—among the most powerful and far-reaching in regional history.

A Sheaf of 24-Hour and Storm-Total Records

Even as the last flakes were flying on Saturday night, a number of sites with century-plus weather histories had already notched the most snowfall ever recorded for a single storm and/or the most ever measured in a 24-hour period. Here's a sample of preliminary data through Sunday morning. (Thanks to Alex Lamers, National Weather Service (NWS)/Tallahassee, for digging up some hard-to-find data on previous record storm totals in the New York City area). Note that the readings below generally pertain to snowfall measurements taken during the storm and added together, with a snow measuring board (snowboard) cleared off between each reading. The final snow depth or the amount you'd measure by sticking a ruler (or yardstick) in the snow at the end of the storm, would normally be a bit less than the amounts shown below, because of the more recent snow on top compressing the lower, earlier layers. Decades ago, snowboards were used less frequently or were cleared less often when used, which means that some past storms would yield higher snow totals if measured with today's standard techniques.

How Widespread Was the Snow?

As noted by Capital Weather Gang's Angela Fritz, the readings at Washington National through Saturday evening struck many as being oddly low compared to neighboring reports, especially toward the north and west. The NWS plans to review the DCA snow reports, which were gathered by contractors for the Federal Aviation Administration, a common practice at many airport locations. In a follow-up story on Sunday, Capital Weather Gang reported that the contractors at DCA had improvised and interpolated from snow-depth measurements after the on-site snowboard could not be found beneath the snow.

The Weather Underground almanac for Saturday at DCA shows that at 4:52 p.m. ET, Washington National reported 18" of snow on ground (rounded to the nearest inch), with 1" having fallen in the previous hour. Snow continued at DCA through midnight; however, the visibility jumped from just 1/16 mile at 4:52 p.m. to much higher values after that point (1/2 mile at 5:39 p.m. and 1.75 mile at 6:49 p.m.), which is consistent with snowfall becoming much lighter.

On Sunday morning, CoCoRaHS reports of snowfall on the ground were all 20" or greater in the District and the adjoining western and northern suburban counties of Fairfax County, Virginia and Montgomery County, Maryland. In the District itself, a snow depth of 22" was reported at the White House CoCoRaHS station, about 4 miles north of the airport and the closest station to DCA that filed a report on Sunday morning. Amounts were substantially lower just east and south of the District, in Prince George's County, Maryland and beyond, although very few of these were close to DCA. A snow-depth report of 16" came in from the vicinity of Fort Washington, about 8 miles south of DCA. To me, the CoCoRaHS data on snow depth imply that the DCA observations of total snowfall could be slightly on the low side but not too far out of line. It will be fascinating to see what the NWS concludes. Perhaps the bigger question is whether reports from DCA should be considered representative of the District, given that snowfalls are often significantly heavier as you go north and west.

While most eyes were peeled on the big cities of the Northeast, coastal residents on either side of the Delaware Bay had to deal with major coastal flooding, especially during Saturday morning's high tide. Storm-related surges of 4 to 5 feet were common across northern Delaware and southern New Jersey. These are close to the highest values one would expect in any nor'easter. To make matters worse, the full moon added about a foot to the normal morning high tide. The resulting storm tide (the amount over the typical low tide or mean low low water, including both astronomical and storm-related effects) hit a record 9.27 feet at Lewes, Delaware, beating the 9.20 feet observed in the nor'easter of March 6, 1962. Cape May and Stone Harbor, New Jersey, both saw record storm tides that exceeded the values observed during Hurricane Sandy in 2012. Floodwaters poured into Stone Harbor in dramatic fashion on Saturday morning.

North of Atlantic City, the storm surge fell far short of the values observed during Sandy. The circulation around Sandy (which made landfall near Atlantic City) drove far larger storm surges of 10 feet or more into the coasts and bays of northern New Jersey and New York, resulting in storm tides as high as 15 feet. Moreover, Sandy's huge waves—much bigger than those from Jonas—added greatly to the impact of the storm surge throughout the region. “Waves can contribute 50 percent or more to the coastal flooding along the open coastline and these are not included in storm tide measurements," Michael Lowry (The Weather Channel), said.

As of Saturday, more than 200,000 homes and businesses had lost power due to Jonas, although outages in the blizzard-socked areas were not nearly as widespread as had been feared. North Carolina was especially hard-hit by power losses due to a glaze of freezing rain that fell early in the storm, topped by a coating of snow.

Hats Off to the Computer Models and NWS Forecasts

One can't help but be impressed by the persistence and accuracy of the leading forecast models in predicting near-record snowfall amounts for days on end ahead of the arrival of Jonas. Early in the week, the GFS and ECMWF models correctly zeroed in on Maryland, including Washington, DC, as a focal point for heavy snow around Friday/Saturday. This gave local forecasters the confidence to issue a blizzard watch on Wednesday morning, two full days ahead of the storm's arrival. (The massive traffic tie-ups in the DC area on Wednesday evening were the result of a mere half-inch of snow from a separate storm that preceded Jonas, a vivid reminder that even minor-seeming winter weather events need to be taken seriously in urban areas.)

New York was a tougher forecast nut to crack. Models agreed that there would be a sharp cut-off to the northern edge of heavy snow, a feature common in nor'easters, but they disagreed on where that northern edge would fall. As early as Wednesday, the NAM model was projecting huge weekend snowfall amounts in the New York area, while the GFS and ECMWF models tended to hold the heavy snow just south of New York, projecting only a few inches at best for the Big Apple. Forecasters at the National Weather Service's local office in Upton, New York, wisely issued a prediction of 8-12" of snowfall and a blizzard watch on Thursday, just as blizzard warnings were being hoisted from Washington, DC to Philadelphia. In New York, this was the perfect situation for a watch, which is intended to alert the public that a particular outcome is possible but not guaranteed. As other models joined the NAM bandwagon on Friday, the blizzard watch for New York City was upgraded to a warning, which provided enough advance notice for city dwellers to stock up on provisions and city planners to prepare for the worst.

Figure 6. Low-, mid- and high-end snowfall amounts (in inches--see legend at top) projected for the region around New York City as of 2 p.m. EST Thursday, Jan. 21 for the period from 1 p.m. Friday to 7 a.m. Sunday. The values at New York City ranged from around 2" at the low end to 20" at the high end.
Figure 7. Analysis of surface pressure and winds at 3 p.m. EST Saturday, Jan. 23, overlaid with radar returns from 3:15 p.m. EST. An occluded front (not shown) extends from the strong surface low just east of the Delmarva Peninsula to a secondary low extending off the east edge of the map. Photo credit: NOAA Storm Prediction Center.

The storm ended up occluding in classic fashion, meaning that its main coastal surface low hung back while jet-stream energy carved out an occluded front extending northeastward just off the East Coast (see Figure 7). This evolution led to prime snowmaking conditions in a region of frontal formation aloft called a deformation zone that set up inland from the surface front, putting the heavy snow along and just northwest of the urban corridor. (Here's an NWS explanation of deformation zones.)

Weather Underground blogger Steve Gregory, like many others, saw the classic nature of this setup emerging in the NAM and GFS models on Friday, although even then he wasn't totally convinced. “Whenever a storm occludes out, it slows down and is pulled closer to the upper low (500 mb) and the storm track. Most importantly the deformation zone was then able to spiral further outward (northward) by 100-150 nautical miles, which brought very heavy snow bands into the New York City/Long Island/Cape Cod region," Steve told me in an email. “This should not have been a surprise to me."

Many New Yorkers remember the storm of late January 2015, when forecasters called for as much as 3 feet of snow in New York City, far more than actually fell there. Though that forecast might seem like a bust, the prediction of huge snows over much larger areas of eastern Long Island and southern New England actually proved correct. Again, the problem was a sharp cutoff to the heavy snow on the storm's outer edge, with models disagreeing on whether that edge would end up west or east of New York City. NWS forecasters went big, then held off on dialing back the forecasts until it was abundantly clear that New York City would escape the worst.

It's crucial that residents, businesses and local government understand that some storms have a wider range of uncertainty than others at a given location. The experimental probabilistic guidance for snowfall that was posted on the home page of the NWS/New York office (see Figure 6) helped provide that sense. On Friday, it showed a low-end outcome of just an inch, but a high-end outcome of around two feet. I look forward to seeing this valuable tool become operational across the nation as soon as possible.