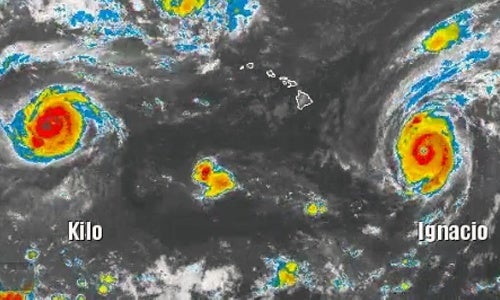 It’s been quite a week for tropical cyclones (the umbrella term for hurricanes and typhoons) with several records set. Last weekend, for the first time ever there were three Category 4 hurricanes (Kilo, Ignacio and Jimena) in the central and eastern Pacific basins at the same time.

Before then, we had never seen two Category 3 hurricanes, let alone Category 4 hurricanes in the North Central Pacific at the same time prior to this, says hurricane researcher and forecaster Phil Klotzbach of Colorado State University. And we are close to setting yet another record: the number of hurricanes that have reached Category 4 or 5 strength in the Northern Hemisphere. We’re at 15 so far, just three short of the record 18 set in 2004, according to Klotzbach. The storms have even drawn the attention of astronauts at the International Space Station, who posted images to Twitter:

Ignacio and Jimena have since weakened, but they’ve been joined by yet another storm: Tropical Storm Kevin. While hurricanes in the Pacific were breaking all kinds of records, Hurricane Fred formed further east in the tropical Atlantic than any hurricane on record.

Not to be outdone by Fred, Hurricane Kilo crossed over the international date line, a rare but not unprecedented event, becoming a typhoon (typhoons and hurricanes are called different names in different ocean basins). Though it wasn’t the first time a cyclone crossed the international date line, Kilo was the third storm to do so this season—marking yet another first.