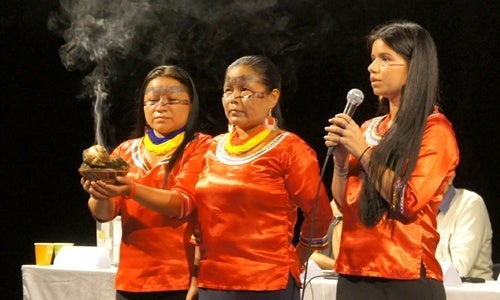 “The message our Living Forest proposal delivers is aimed at the entire world with the goal of reaching the hearts and minds of human beings everywhere, encouraging us all to reflect on the close relation between Human Rights and the Rights of Nature.”‎ —From Kawsak Sacha, The Living Forest: An Indigenous Proposal for Confronting Climate Change, presented by the Amazonian Kichwa People of Sarayaku, Ecuador

December 2015 found all eyes on Paris as government representatives from around the world debated and finalized a new international climate change agreement at the United Nations COP21 climate negotiations. The news was abuzz with stories and analysis about the Paris agreement and the commitments (or lack thereof) made by world governments, however it was just outside of the narrow glance of the mainstream media that actions and events for bold transformative change were taking place.

It is critical to highlight these peoples’ movement initiatives, planned in parallel to COP21 proceedings, because they are the ones bringing about the socio-ecologic and systemic transformation that concerned people around the world are calling forth—from decentralized energy systems and food sovereignty to Indigenous rights and gender-responsive climate policies.

Like inconspicuous stones cast into a deep pond, the ripples from these alternative proceedings are reaching outward and broadening into ever widening circles, connecting one to another and spreading worldwide.

So it was that two significant ripples that demonstrate respect for Nature and the natural laws of the Earth, topics stunningly absent from the UN negotiations, radiated out into the corridors of COP21, to civil society gatherings and onto the streets of Paris. One ripple was the growing global movement for the Rights of Nature, the other, going hand-in-hand, the potent voice of the Indigenous Kichwa People of Sarayaku, Ecuador and their Living Forest Proposal.

Rights of Nature is a revolutionary and evolutionary concept, at the heart of which lies a key to addressing our horrifically dysfunctional economic system and the legal, social and political frameworks that are destroying people and planet.

The Rights of Nature framework originated from the understanding that after decades of environmental protection laws (which surely have achieved some notable successes), our modern legal systems have failed to prevent the increasingly grave threats of climate change, ecosystem degradation, and the growing displacement of humans and other species.

The majority of the world’s legal frameworks are based on treating nature as property, meaning that our life-giving rivers, forests and mountains are seen as objects to be sold and consumed. Our current legal paradigm furthers dangerous ideas around the commodification and financialization of nature, and we can see the disastrous results of this way of thinking.

To avert the worst impacts of the climate crisis and move towards truly sustainable living, we must challenge the idea that Earth’s living systems are property and change the very DNA of our legal frameworks to adhere to the natural laws of the Earth.

Recognizing Rights of Nature means that human activities and development must not interfere with the ability of ecosystems to absorb their affects, to regenerate their natural capacities, to thrive and evolve, and requires that those responsible, including corporate actors, be held fully accountable for negative impacts on Earth systems.

Rights of Nature Tribunals give people from all around the world the opportunity to testify publicly on the destruction of the Earth and their communities, while simultaneously creating a new legal framework, providing critical alternatives for environmental protection, and offering a new vision for just social, economic and political structures.

Critically, a Rights of Nature framework also provides a path through which people can re-learn respect for Mother Earth, as Indigenous peoples of the world have been demonstrating for thousands of years. As more and more activists in Paris began to acknowledge, we are not just protecting nature, we are nature – a recognition of profound significance given that it is the belief that we are separate from the Earth that resides at the root of and furthers a destructive relationship to the natural world.

In Paris, the Global Alliance for the Rights of Nature held its third International Rights of Nature Tribunal, covering topics ranging from fracking and mega-dams to GMO’s, deforestation and violence against defenders of the land.

Rights of Nature Tribunals cases were founded on the mandate of the Universal Declaration of the Rights of Mother Earth, drafted in 2010 at the World People’s Conference on Climate Change and the Rights of Mother Earth in Bolivia. Outcomes and final judgments were based on scientific, technical, research-based and other expert testimony, the first-hand experiences of witnesses, as well as the world views and wisdom of Indigenous peoples who hold an ancient understanding of humans as part and particle of the living cosmos.

“Let’s leave our old perceptions and ideas, to be reborn and boost a collective transformation! Now is the time to stop these destructive ideas in our ancestral territories and around the world. We as Indigenous peoples have the great opportunity to bring our vision—and a clear proposal—that could call on a transformation for all of humanity.” —Patricia Gualinga, Director of International Relations for the Kichwa community of Sarayaku, Ecuador (Source: Amazon Watch)

Throughout the two weeks of the UN climate talks, a delegation of Indigenous Kichwa leaders from Sarayaku, Ecuador worked ceaselessly to present and spread their proposal of Kawsak Sacha, or the “Living Forest,” a comprehensive vision for living in harmony with the natural world based upon the practices with which their ancestors have sustainably inhabited and cared for the health of the Amazon Rainforest for millennia.

Patricia Gualinga from the Sarayaku delegation presents the Living Forests proposal at a COP21 side event organized by the Women’s Earth and Climate Action Network and Amazon Watch. Photo credit: Emily Arasim

Their proposal is a profound challenge to dominant concepts and practices, which view nature as a resource to market, commodify and exploit without limit. In the context of the Paris climate change agreement, this means a challenge to the idea that we can put forests into carbon trading schemes and other market mechanisms as a means of addressing climate change.

The Kawsak Sacha “Living Forests” vision is vital for many reasons, the most fundamental being that maintaining the ecologic balance of the Amazon is essential to Earth’s health and capacity to mitigate climate change. Approximately 20 percent of the carbon dioxide produced from burning fossil fuels is absorbed by tropical forests around the world, and this is just one of many critical ecologic functions. Consequently, protecting the Amazon rainforest, the largest of the world’s tropical forests, must be central to climate change discussions and policies.

Within this context, Indigenous peoples and their rights must be respected and protected because it is their intimate relationship with their forests and their courageous ongoing struggles to defend their territories that has and will continue to bring about the highest protection of these vital rainforests. It is a grave and dangerous tragedy that alongside human rights, Indigenous rights were removed from the operative part of the final Paris agreement.

The wisdom and worldview expressed in the Kawsak Sacha proposal has much to offer and is best shared through excerpts of the words of the Sarayaku people themselves:

Kawsak Sacha (The Living Forest) is a proposal for living together with the natural world that grows out of the millennial knowledge of the Indigenous Peoples who inhabit the Amazonian rainforest, and it is one that is also buttressed by recent scientific studies. Whereas the western world treats nature as an undemanding source of raw materials destined exclusively for human use, Kawsak Sacha recognizes that the forest is made up entirely of living selves and the communicative relations they have with each other. These selves, from the smallest plants to the supreme beings who protect the forest, are persons (runa) who inhabit the waterfalls, lagoons, swamps, mountains, and rivers, and who, in turn, compose the Living Forest as a whole.

Kawsak Sacha, understood as sacred territory, is the primordial font of Sumak Kawsay (Buen Vivir, “Good Living”). In essence, the forest is neither simply a landscape for aesthetic appreciation nor a resource for exploitation. It is, rather, the most exalted expression of life itself. It is for this reason that continued coexistence with the Living Forest can lead to Sumak Kawsay. This encourages us to propose that maintaining this lively space, based on a continuous relation with its beings, can provide a global ethical orientation as we search for better ways to face the worldwide ecological crisis in which we live today. In this manner Sumak Kawsay can become a planetary reality.

1. Our Concrete Proposal consists in attaining national and international recognition for Kawsak Sacha (the Living Forest), as a new legal category of protected area that would be considered Sacred Territory and Biological and Cultural Patrimony of the Kichwa People in Ecuador.

2. The Living Forest proposes a way of achieving Sumak Kawsay by means of the application and execution of Life Plans that are sustained by the three foundational pillars of the Sumak Kawsay Plan: Fertile Land (Sumak Allpa); Living in Community (Runaguna Kawsay); and Forest Wisdom (Sacha Runa Yachay).

3. Understood as Territory, the Living Forest, thanks to forty years of communal effort, is now demarcated by a border of flowering and fruiting trees visible from the air. We call this vital cordon a Frontier of Life or Trail of Flowers (Jatun Kawsak Sisa Ñampi). By means of the flower’s ephemeral beauty, the Frontier of Life conveys the fragility of life and the fertility of the Living Forest that it both surrounds and protects. At the same time it creates the possibility of beginning to dialogue with the beings that make up the Living Forest. In this way the Frontier of Life creates a permanent forum for communication among beings. This can help the entire world recuperate the original understanding of Mother Earth as a shared home.

Given the gravity and speed of climate change, it would behoove us to immediately welcome truly transformative ideas such as Rights of Nature and the Kawsak Sacha proposal. May these ripples in the pond turn into waves of change, or we will have overwhelming waves from sea level rise that will not be the transformation we are seeking.

Special thanks to Amazon Watch and the Indigenous Environmental Network for their support of the Indigenous peoples and the initiatives featured in this article.

Osprey Orielle Lake is the founder and executive director of the Women’s Earth and Climate Action Network (WECAN) International and co-chair of International Advocacy for the Global Alliance for the Rights of Nature. Osprey is the author of the award-winning book Uprisings for the Earth: Reconnecting Culture with Nature. Follow on Twitter @WECAN_INTL.

Lumber Liquidators Sentenced to $13.2 Million for Smuggling Illegal Wood Into the U.S.