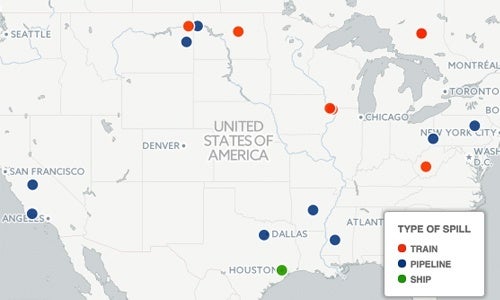 Big Oil has dealt North America a battering this month as we’ve seen spill after spill hit the headlines. Label it negligence or an inevitable reality of oil production, the impact is the same: oil and its byproducts are being dumped into our communities, our water supplies and the delicate ecosystems that we value. Despite the industry’s slick rhetoric of reassurance about the safety of oil extraction, it is undeniably clear that Big Oil is unable to contain its destructive product to the detriment of our health, communities and environment.

It is high time our elected leaders embrace this indisputable fact and start taking serious steps to reduce our exposure to these risks—starting by saying no to the most extreme projects like drilling in the Arctic and Atlantic coasts or tar sands development—and ensuring that whatever extraction does occur is held to stringent safety standards. Ultimately, however, what the recent headlines make abundantly clear is that we will only be safe from the harms of fossil fuel production when we succeed in moving beyond oil to clean alternatives—and there is no time to waste. 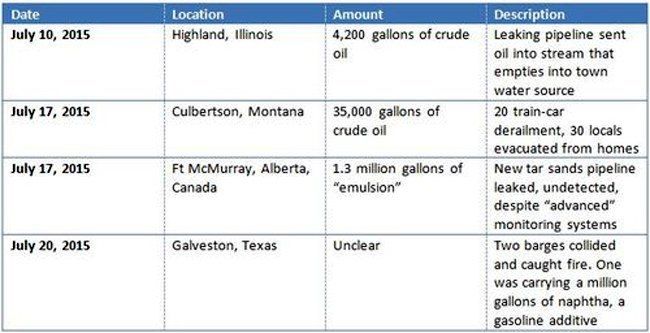 Between four spills in July alone (described in the chart above), we have seen more than 1.3 million gallons oil foul our lands while an unknown quantity, up to another million gallons, was leaked in to Galveston Bay. Of the oil allowed to spill onto soil, 97 percent of it was near Ft. McMurray in Alberta, Canada. The 1.3 million gallons of emulsion (tar sands bitumen and water) leaked by tar sands leviathan, Nexen, constitutes one of the worst land spills in history and it evaded detection by the relatively new pipeline’s “failsafe” spill detection system.

Neither the spill itself nor the failure of the failsafe are rare occurrences, unfortunately. A 2012 study by the U.S. Department of Transportation’s Pipeline and Hazardous Materials Safety Administration found that leak detection systems only detected spills on a company’s right-of-way 11 percent of the time. So pipelines are left to dump toxic pollutants onto the ground until an employee, landowner, or member of the public stumbles across it 9 times out of 10. In the last 20 years, there have been more than 5,600 “significant” pipeline incidents that have caused nearly 1,400 injuries, killed an average of 18 people each year and cost almost $7 billion in damages.

Spills from trains, piplelines, and ships, only, since January 2015.

Big Oil wants us to label these spills as unforeseen mistakes. “Accidents happen,” they say. But when a pattern is clear, risks are high and consequences grave, it’s time to question whether it is right to accept a status quo of predictable, consistent error and harm. Instead, we must acknowledge that each of these oil spills are not only technological mistakes or matters of human error, but systematic failures and allowing them to continue becomes a question of conscience.