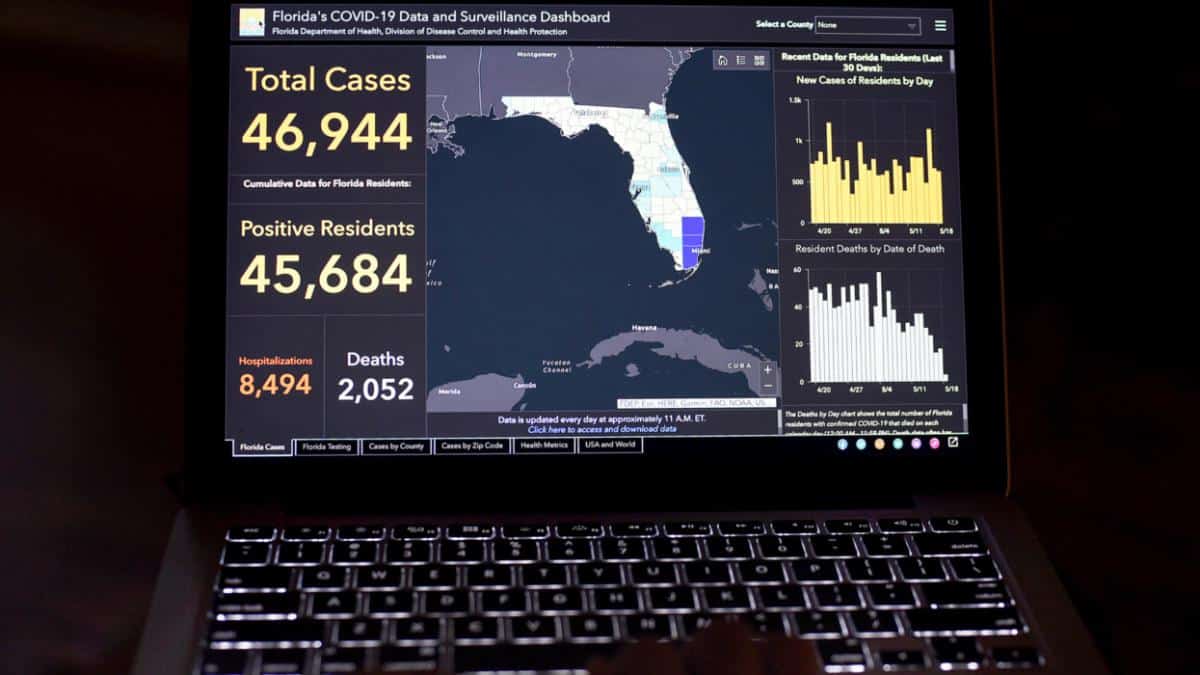 A photo illustration of Florida's COVID-19 Data and Surveillance Dashboard, created by Rebekah Jones, is displayed on a computer screen on May 19, 2020. Paul Hennessy / SOPA Images / LightRocket / Getty Images

Rebekah Jones, the Florida data scientist who said she was fired in May after refusing to manipulate data on a widely praised coronavirus dashboard that she designed, had an even more dramatic encounter with the state government Monday when the police raided her Tallahassee home.

Jones said in a Twitter thread that police entered her home at 8:30 a.m., confiscated all of her computer hardware and technology and pointed guns at both her and her children.

Florida Department of Law Enforcement (FDLE) Commissioner Rick Swearingen confirmed that the raid occurred in a statement reported by NBC6 South Florida. However, he denied that weapons were pointed at anyone during the incident. He said that agents knocked and called Jones, but that she hung up on them and refused to answer the door for 20 minutes.

In a video of the incident posted by Jones on Twitter, police officers appeared at the door with guns drawn and asked Jones who else was in the house, the Tallahassee Democrat reported. When she said her husband and children were inside, one agent entered the home with his gun still drawn and told her husband to come downstairs. At one point, an agent told Jones to calm down.

“He just pointed a gun at my children!” she responded.

The FDLE said they went to Jones’s home to carry out a search warrant based on a complaint from the Department of Health (DOH), Jones’ former employer.

“FDLE began an investigation November 10, 2020, after receiving a complaint from the Department of Health (DOH) regarding unauthorized access to a Department of Health messaging system which is part of an emergency alert system, to be used for emergencies only,” FDLE spokeswoman Gretl Plessinger said in a statement reported by the Tallahassee Democrat.

The case revolves around a message sent by an unidentified individual to the emergency alert system.

“It’s time to speak up before another 17,000 people are dead,” the message read. “You know this is wrong. You don’t have to be a part of this. Be a hero. Speak out before it’s too late.”

AN FDLE investigator said he traced the message to an IP address linked to Jones’ Comcast account. While an IP address shows where an internet connection was made, it does not prove Jones sent the message, tech experts told the Tallahassee Democrat.

Jones denied sending the message in an interview with CNN. She said she lost access to government accounts when she was fired and did not have the skills to hack into them. She also denied the phrasing and data in the message were hers.

“The number of deaths that the person used wasn’t even right,” Jones told CNN. “They were actually under by about 430 deaths. I would never round down 430 deaths.”

Jones helped to design Florida’s highly praised coronavirus database before being fired in May. She said her dismissal came because she had refused to alter data on the dashboard in order to bolster support for re-opening. The DOH claimed she was fired for insubordination.

After she was fired, she developed her own website that tracks Florida coronavirus data, according to CNN. It is operated by one of the computers seized Monday. Jones said the police also took flash drives that contained “proof that [state officials] were lying in January about things like internal reports and notices from the CDC” and “evidence of illegal activities by the state.” She said she accessed the reports legally and received some from others after she left the DOH.