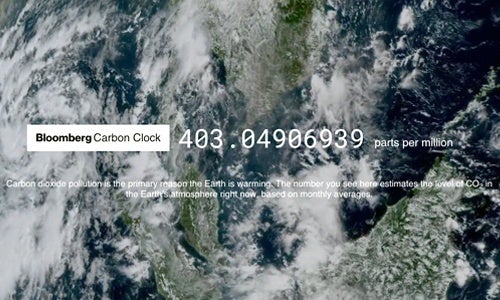 Bloomberg’s Carbon Clock serves as an ominous reminder that carbon levels are rising rapidly. The clock tracks the monthly average levels of carbon dioxide (CO2) in the atmosphere. The current number is slightly above 400 parts per million (ppm).

Bloomberg’s Carbon Clock tracks the global monthly average of emissions as measured in parts per million.

“Carbon dioxide pollution is the primary reason the Earth is warming,” Bloomberg explained. “The number you see here estimates the level of CO2 in the Earth’s atmosphere right now, based on monthly averages.”

Scientists estimate pre-industrial CO2 levels hovered around 280 ppm. When scientists first measured CO2 levels in 1959, they were at 316 ppm. The “danger zone,” according to Bloomberg, is 450 ppm, which we may reach in just a few decades. The climate group 350.org proposes rapidly reducing CO2 levels to below 350 ppm this century to avoid the most catastrophic impacts of climate change.

Carbon dioxide levels remained relatively constant for hundreds of thousands. In recent years, carbon levels have soared to around 400 ppm. The “danger zone” is 450 ppm, which we may reach by 2040, Bloomberg warned.

And don’t be fooled by carbon’s seasonal cycle, Bloomberg cautioned. CO2 levels fall each spring and autumn when vegetation in the Northern Hemisphere absorbs carbon from the air, but the overall trend is still upward.

Even though carbon levels fluctuate seasonally, the overall trend is upward.

The World Meteorological Organization reported in November 2015 that atmospheric greenhouse gas concentrations hit yet another new record in 2014, “continuing a relentless rise which is fueling climate change and will make the planet more dangerous and inhospitable for future generations.” At the same time, the UK’s Met Office reported that 2015 marked the first time global mean temperature at the Earth’s surface was set to reach 1 degree Celsius above pre-industrial levels.