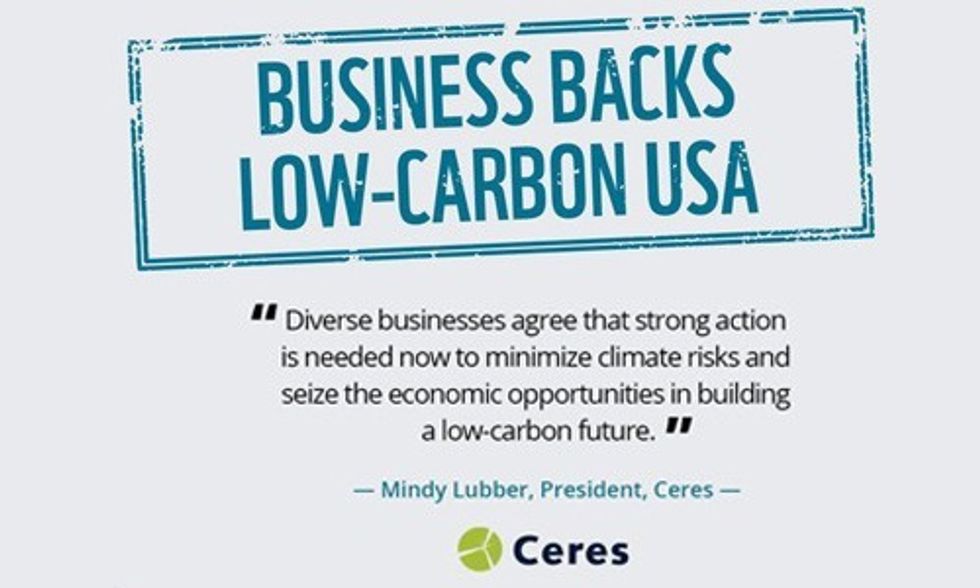 The ongoing international climate negotiations here in Paris are an intricate ecosystem of policy wonks, finance ministers and world leaders trying to create one seamless tapestry called a low-carbon future.

But there’s another equally important ecosystem in play in Paris—the capital market ecosystem which must stitch its own tapestry for managing escalating global financial climate risks. More than I ever expected, this topic has been getting enormous attention—not just at Ceres-hosted events—but beyond. From stranded carbon assets and 2-degree stress testing to nominating climate-competent board directors and eliminating fossil fuel subsides, businesses and investors are all talking in lock-step about a top-to-bottom transformation in how our economic system factors climate risks and opportunities into daily decision-making.

I’ll be the first to admit, this transformation will not come easily or quickly. After all, we’re looking to shift an economy that has been driven by fossil fuels for more than a century. But a strong binding climate agreement—one that sends a clear market signal that the world is ready for a low-carbon future—will certainly hasten the process.

So what will it take to re-tool our economy for a de-carbonized world, a world that must reduce greenhouse gas pollution by 80 percent by 2050 to prevent catastrophic global temperature increases?

One key theme I heard often—New York Times columnist Thomas Friedman called it “the word of the day at COP21”—is stranded carbon risks.

Remarkably this concept didn’t exist a few years ago. But as economists and researchers began connecting the dots on the necessity of keeping fossil fuel resources such as oil and coal in the ground—rather than extracting and burning them—the potential of carbon assets being "stranded” began taking hold. The issue is especially germane for energy companies whose business models have long been premised on producing more and more fossil fuels well into the future, even while demand scenarios shift.

But with scientists and investors asking hard questions about how much carbon pollution the planet can handle, stranded assets has taken center stage. Last week, Carbon Tracker projected potential losses of up to $2.2 trillion for oil and gas firms who are overestimating future oil demand.

Another trend gaining traction in Paris is 2-degree stress testing. These tests would examine how companies’ long-term business strategies—especially energy companies—will hold up if negotiators are successful this week in achieving an accord that will limit global temperature rise to 2 degrees Celsius. Even if they don’t, political and business momentum for a low-carbon transition is unprecedented—and will only grow stronger.

Many European energy companies are doing these tests and it’s a big reason why some, including Total, are already shifting more capital towards cleaner natural gas and renewables and away from carbon-intensive coal.

But momentum is building to broaden this effort. “We should get all companies to do this,” said Sharan Burrow, general secretary of the International Trade Union Confederation.

Major public pension funds and other investors are also being pressed to do portfolio-wide stress tests.

Dozens of other ideas were highlighted for building a truly low-carbon economy—among the biggest, ending fossil fuel subsidies. Morocco, which has set a goal to get half of its power from green energy by 2030, has already taken this bold step. “It required political courage, but it sent a strong message,” Morocco’s energy minister said on Saturday.

U.S. pension funds are also advocating for changing the composition of corporate boards, especially at energy companies. Dozens of shareholder resolutions were filed with energy companies last year requesting that they diversify their boards.

Ehnes also highlighted the important work of the Sustainability Accountability Standards Board, a nonprofit group pushing to strengthen and standardize corporate reporting on climate risks and other sustainability challenges.

As I return home from Paris, regardless of the final outcome, one thing is clear: the time has come to re-tool our global economy for a low-carbon future. Many businesses and investors are ready, but we’ll need to accelerate and broaden the effort—and do so quickly.