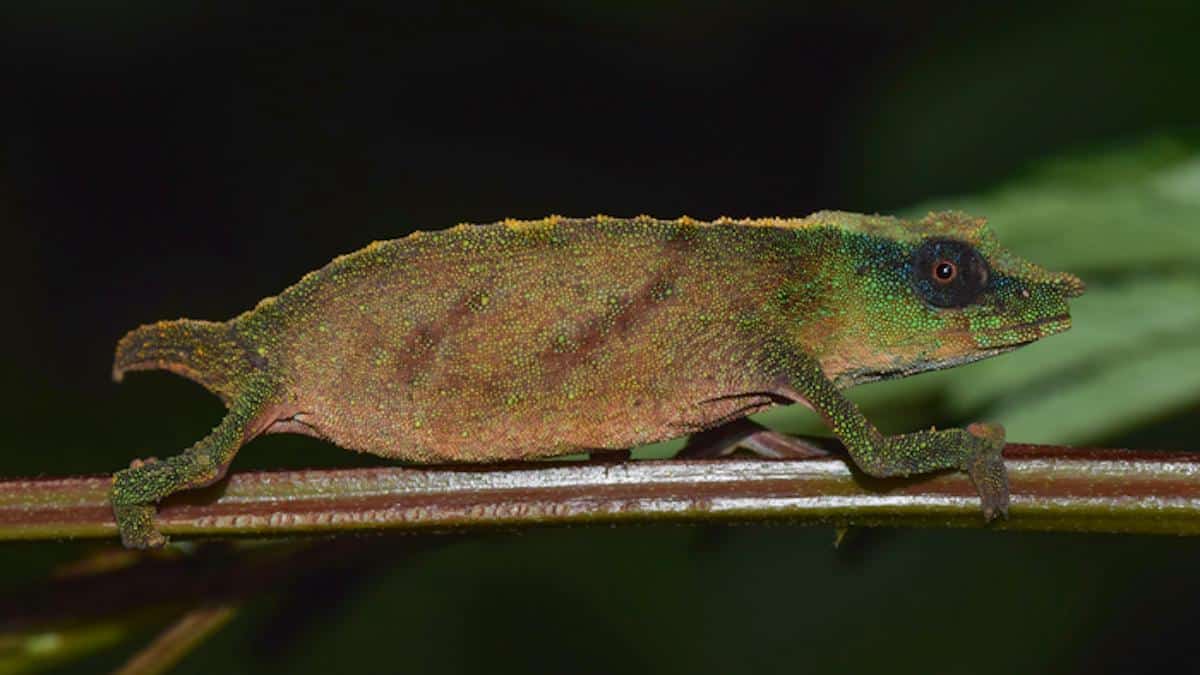 An extremely rare species of chameleon feared to be extinct has been found alive, for now.

Chapman’s pygmy chameleon (Rhampholeon chapmanorum) lives only in the lowland rainforest of the Malawi Hills in southern Malawi, around 80 percent of which have been cleared since 1984. But a study published in Oryx — The International Journal of Conservation on Tuesday found that the chameleons are still “clinging to survival” in the patches of forest that do remain.

“The first one we found was in the transition zone on the forest edge, where there are some trees but mostly maize and cassava plants,” study lead author professor Krystal Tolley from the South African National Biodiversity Institute and the University of the Witwatersrand said in a press release. “When we found it we got goosebumps and just started jumping around. We didn’t know if we would get any more, but once we got into the forest there were plenty, although I don’t know how long that will last.”

Chameleons face extinction at higher rates than the approximately 15 percent average for reptiles from the Squamata order, which includes snakes and lizards. Thirty-four percent of chameleon species are threatened, and 18 percent are near-threatened, according to the study authors. The majority of the threatened chameleons live, like Chapman’s pigmy, in forests that are at risk from degradation and deforestation.

Chapman’s pigmy chameleon grows to be only 3.5 to 5.5 centimeters (approximately 1.4 to 2.2 inches). It is usually brown in appearance but can transform into a blue and green color with little dots, possibly as a means of communication, Tolley said.

Pigmy chameleons in general have a unique temperament, according to Tolley.

“They are little, gentle creatures. Other chameleon species can be hysterical, hissing and biting, but pygmy chameleons are gentle and just beautiful,” Tolley said. “Chapman’s in particular are one of the smallest and don’t have a prehensile tail like most chameleons, perhaps because they aren’t particularly arboreal but walk about on the forest floor in the leaf litter, crawling up into low bushes at night to sleep. They blend right into the leaf litter and perfectly pattern match the dead leaves.”

They are also critically endangered. The species was first described by herpetologist Colin Tilbury in 1992, CNN reported. At that time, there was already evidence of deforestation in its Malawi Hills habitat. In 1998, 37 of the chameleons were taken from the Malawi Hills and released 59 miles north in Mikundi, Malawi for protection. Those chameleons were still present in 2001 and 2012. However, Tolley did not observe any chameleons during an assessment in 2014, leading her to fear they might be extinct.

In 2016, however, a team from the South African National Biodiversity Institute and the Museums of Malawi surveyed the Mikundi release site and two remaining forest patches in the Malawi Hills, according to the press release. The team found chameleons in all three sites: 17 in the Malawi hills sites and 21 adults with 11 young chameleons in the Mikundi site, according to the study.

However, Eric Routman, a professor emeritus of biology at San Francisco State University who was not involved in the study, told CNN that the researchers might have overestimated the current genetic wellbeing of the animals by not considering how some genes are passed on.

“And even if they had lots of loci and good genetic estimates, they have no estimate of these genetic parameters before the habitat fragmentation, so they can’t attribute any genetic effect to deforestation,” Routman told CNN. “If I had been reviewing this paper, I would have recommended major revisions to the manuscript. Essentially, the genetic part of their study is inconclusive.”

In either case, the species is at risk if its habitat is not protected. The study authors say an action plan is needed to save the species, according to the press release. Specific recommendations include:

“The forest loss requires immediate attention before this species reaches a point from which it cannot return,” Tolley said in the press release. “Urgent conservation action is needed, including halting of forest destruction and recovery of habitat to promote connectivity.”