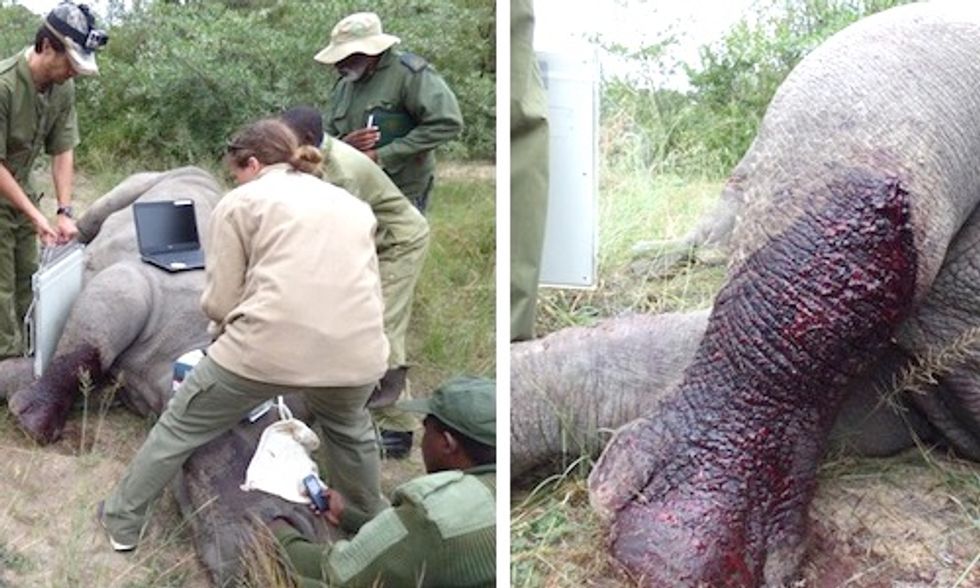 The 8-year-old rhino was named Ntombi, which translates to "girl" in Zimbabwe’s Ndebele language. The well-known rhino, who was reportedly featured in the 2012 Animal Planet series Karina Wild on Safari, was also the mother of a 13-month-old calf which was not harmed by poachers.

As mentioned in the video, the rare black rhino was part of a groundbreaking genome sequencing project to save the endangered species, which currently has a global population of less than 5,000.

The poachers had targeted Ntombi earlier this month, according to the Bhejane Trust, a Zimbabwe-based rhino and wildlife conservation nonprofit:

Tragic news from the Matopos where a well known young 8 year old rhino cow, Ntombi, was shot and wounded. The shots were heard on Tuesday last week but nothing was found after a search by parks. Only days later was the severely wounded Ntombi found, and had to be euthanised as the vet ruled there was no possibility of saving her - she had lived a week of indescribable agony! Ntombi had a 13 month calf ( her first) and we are following up on what has happened to this youngster. We have suspicions as to who the poachers were, and will be offering a substantial reward for any arrest in this case!

Caroline Washaya-Moyo, a spokeswoman for Zimbabwe Parks and Wildlife Management Authority (ZPWMA), told Reuters Africa that the rhino had four bullet wounds in her legs and shoulder after being shot last week. Her horns had been sawn off but were later recovered.

"The animal was very immobile and was unable to walk to access food and water. Because of the seriousness of the wounds the authority had to put the animal to sleep," she added.

Veterinarians from animal conservation group Aware Trust carried out X-rays on Ntombi. On Facebook, the group said the situation was "gut wrenching" and "one of the most difficult things we've had to do."

"Now is the time to come forward and help Zimbabwe's National Parks," Aware Trust wrote. "If we don't stand united against poachers, we will lose our wildlife heritage forever. Please ... support Zimparks."

Reuters reported that ZPWMA is conducting an investigation into the poaching and wardens are now caring for Ntombi's young calf.

Consumer demand of rhino horn in parts of Asia have driven a tragic increase in wildlife crime. The International Union for Conservation of Nature lists black rhinos as Critically Endangered:

The population of Black Rhino has declined by an estimated 97.6% since 1960 with numbers bottoming out at 2,410 in 1995, mainly as a result of poaching. Since then, numbers have been steadily increasing at a continental level with numbers doubling to 4,880 by the end of 2010. Current numbers are however still 90% lower than three generations ago.

Survival of these species is at incredible risk. A record 1,305 rhinos were illegally killed in Africa last year, according to Reuters. Zimbabwe's black and white rhino population is estimated at just over 800, Washaya-Moyo said.