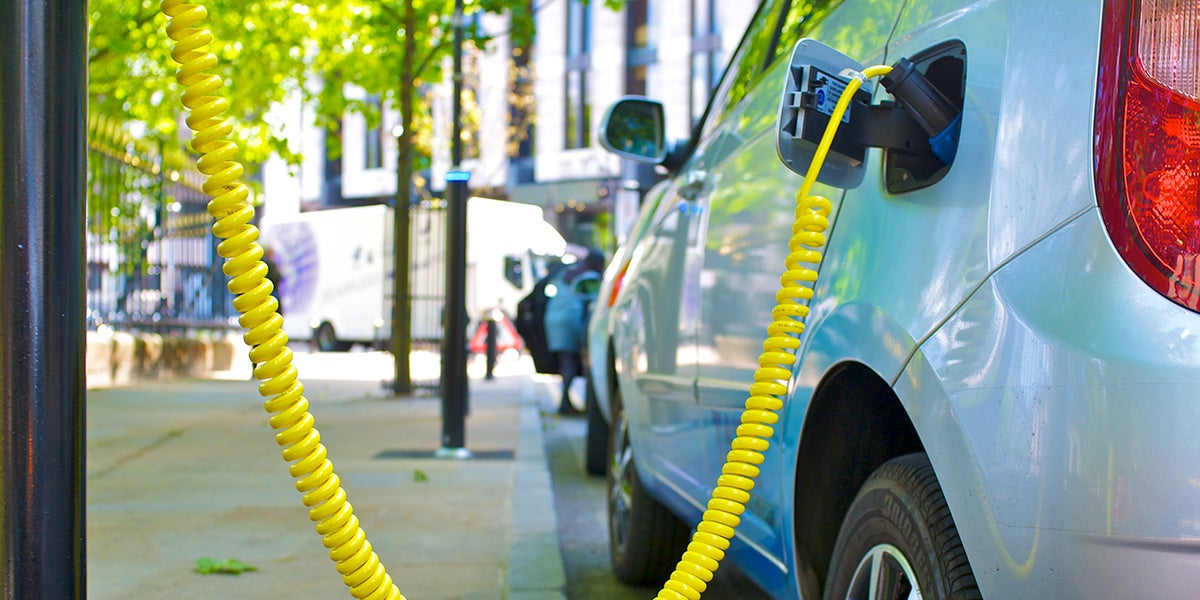 There could be as many as 36m electric vehicles (EVs) on UK roads by 2040, double the number expected just a year ago.

“Growth in EVs supports the continued trend towards more low-carbon generation,” said National Grid. “[They] will be able to support the continued growth in renewables by storing excess generation and releasing it back onto the network when it is needed.”

Each year, National Grid publishes a set of four scenarios for the UK’s future energy supply and demand built around the company’s own modelng and consultation with the energy community. The scenarios help the company plan for an uncertain—but rapidly changing—energy system.

“It’s impossible to accurately forecast a single energy future over the long term. However, creating a range of credible futures allows us to continue supporting the development of an energy system that’s robust against different outcomes.”

This year’s scenarios include a stronger focus on the UK’s transition to low-carbon. “We’ve refreshed our scenario framework to reflect the increasing importance of decentralization and decarbonization in our industry,” Slye wrote.

Nevertheless, only two of the four scenarios meet the UK’s legally binding greenhouse gas emissions target for 2050—an 80 percent cut on 1990 levels. This target is likely to be raised in response to the 2015 Paris agreement. These points form important context for National Grid’s conclusions.

In previous years, only one of the four scenarios met the UK’s 2050 target.

Twice as Many EVs

One of the most striking changes in this year’s scenarios is the much more rapid adoption of EVs. This can be seen in the chart, below, which compares scenarios that meet the 2050 target and were published in each year between 2013 and 2018. 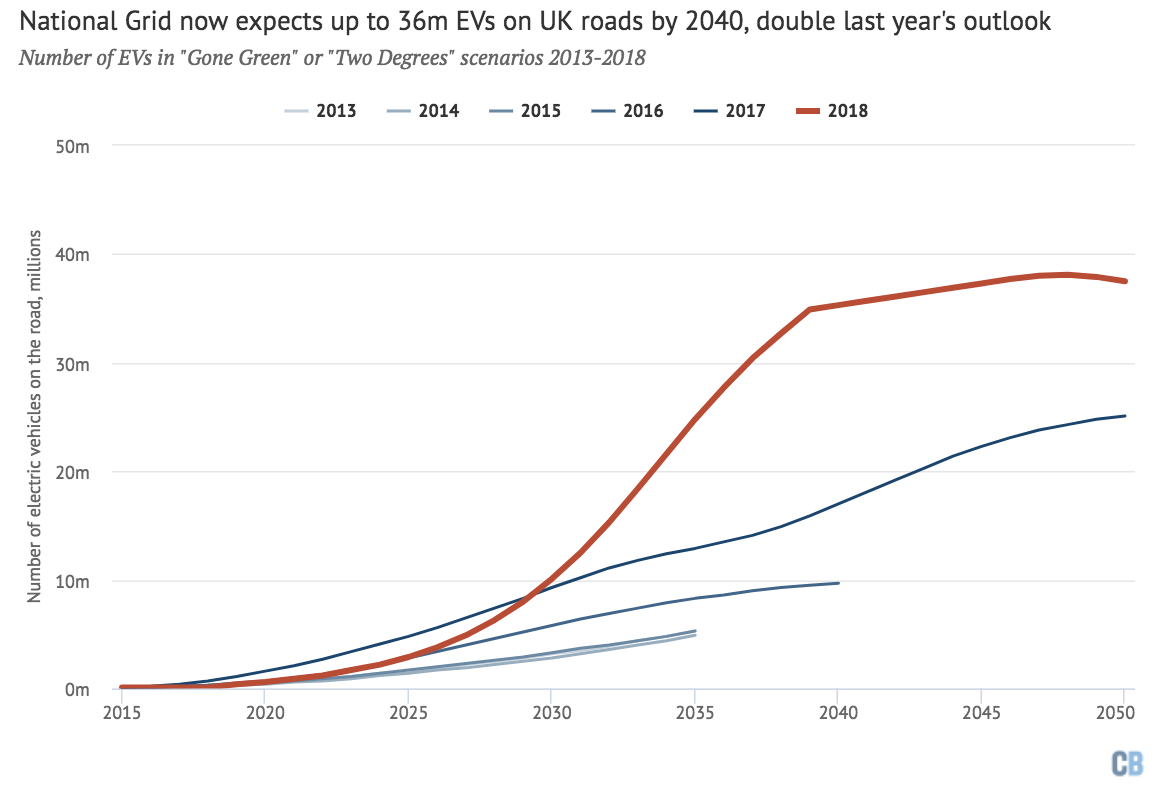 This year, National Grid said there could be up to 25m EVs by 2035 and 36m by 2040, effectively doubling its outlook from last year. The figures represent a tripling compared to 2016’s figures and a five-fold increase from the 2015 numbers. By 2040, National Grid now said EVs will reach saturation point, with all possible vehicles electrified and new EVs replacing old ones as they retire.

“We have been working hard to develop a much more holistic road transport model that takes into account the whole cost of ownership of vehicles. Our new model is much more granular in its detail and consequently it is more robust than previous ones.”

The increase in outlook also reflects the government’s somewhat weakened pledge to ban conventional petrol and diesel cars by 2040.

The same June brief explains how National Grid has been working to understand the way that people will use and charge EVs. The electrification of transport—and, potentially, also heat—is set to raise UK demand for electricity, meaning more generating capacity will need to be built.

Last year, National Grid’s earlier work on the impact of this new electricity demand was widely misreported as showing that the transition to EVs would be unmanageable. Since then, it has been working to expand its evidence base and to more realistically explore the impact of EVs.

“We have been gathering large amounts of evidence to help us formulate views on some of the more uncertain variables associated with vehicle use and charging preferences. The ‘how and what’ type of chargers that people use is all being considered.

“We anticipate that most consumers will avoid peak time charging although some may still choose to do so. Vehicle to Grid technology is also a new input into our model … In our scenarios, we show that this is going to have significant impacts on the energy landscape of the future.”

Combining these new insights on deeper EV penetration, smarter charging and vehicle-to-grid, National Grid now says peak electricity demand could be increased by between 3-8 gigawatts (GW in 2030 (4-14 percent) and by 3-13GW in 2050 (6-22 percent). This is shown in the chart, below. These ranges can be compared to last year’s future energy scenarios, which saw 2050 peak demand increasing by at least 6GW and as much as 30GW as a result of EVs. The top end of this range assumed that all charging was “dumb,” taking place during peaks. National Grid now thinks the majority of chargers will be “smart,” enabling most consumers to shift demand off-peak.

Note that the largest increases in 2050 peak demand are in scenarios that do not meet the 2050 carbon target (“Steady Progression” and “Consumer Evolution”). The target-compliant scenarios (“Community Renewables” and “Two Degrees”) see earlier increases in peak demand, due to more rapid uptake of EVs, but also faster adoption of vehicle-to-grid technology.

The main difference between the two target-compliant scenarios is what National Grid calls “engagement.” This reflects whether consumers choose to charge their EVs during peak demand or whether lower tariff prices encourage them to charge during periods of low demand.

(More broadly, the shift to EVs will reduce energy demand, as they are more efficient than combustion-engine vehicles. An interactive tool developed by the Carbon Tracker Initiative shows how much EV adoption will cut into global oil demand.)

This year’s report says the use of smart chargers and vehicle-to-grid technology means EVs can “supports the continued trend towards more low-carbon generation” by smoothing supply and demand. 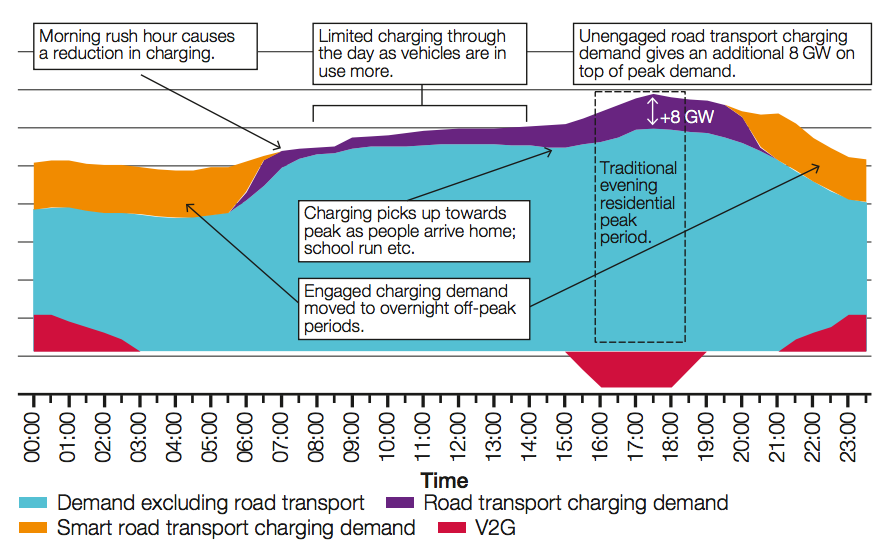 National Grid said a range of commercial developments support its updated views on EV charging behavior: “A number of energy suppliers have launched EV specific tariffs that have a time of use element [pricing to encourage off-peak charging].”

There have also been innovations and trials in vehicle-to-grid technology, it added.