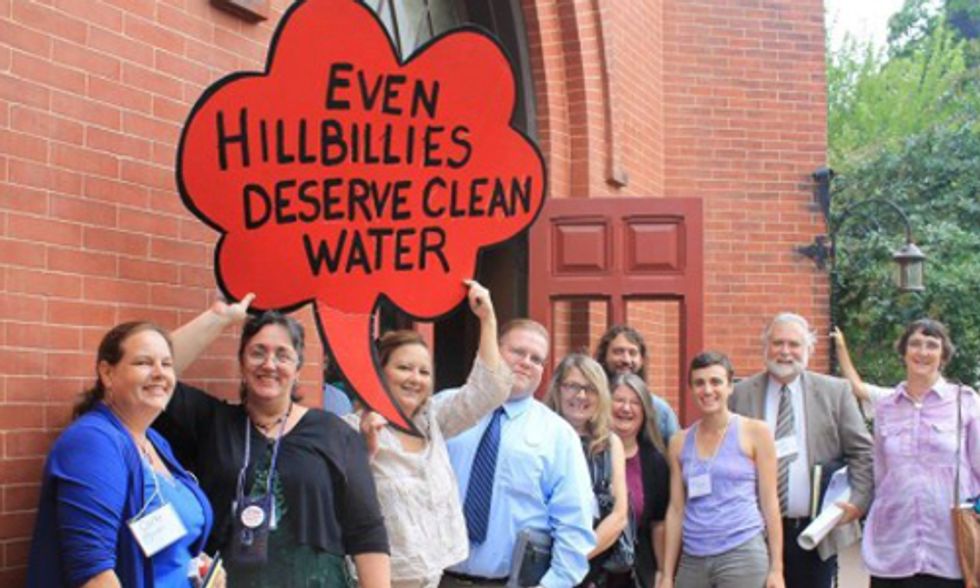 The process of mountaintop removal mining has made accessing coal seams easier and less labor intensive. It's also blighted the Appalachian landscape of West Virginia, Kentucky, Tennessee and Virginia where it's taking place, destroying 10 percent of the land in central Appalachia, ravaging forests, burying more than 2,000 miles of streams in debris and polluting water supplies with coal ash and chemicals. And it's helped decimate employment in the coal industry, dealing another blow to one of the country's poorest regions. It's great for Big Coal, not so great for ordinary citizens.

In 2009, the White House Council on Environmental Quality, with the U.S. Army Corps of Engineers, the Department of the Interior and the Environmental Protection Agency (EPA), produced a Memorandum of Understanding (MOU) with an interagency action plan "designed to significantly reduce the harmful environmental consequences of Appalachian surface coal mining operations, while ensuring that future mining remains consistent with federal law.”

Today the Alliance for Appalachia, a coalition of grassroots citizen groups, released a study assessing how well that plan had been implemented and what still needs to be done. While pointing to some successes, the group said much stronger actions are needed to avert future disasters like the chemical dump that fouled the drinking water for hundreds of thousands of West Virginians in January.

“The coal industry is never going to be like it was in the 30s," said Teri Blanton, a volunteer with the Alliance for Appalachia and Kentuckians for the Commonwealth. "The jobs have been on a decline since the beginning. We need to realistically think of the future of Appalachia and fix this mess. We could employ ten times the number of workers just fixing the toxic pollution mountaintop removal has left behind. We need reinvestment in Appalachia—not just clean energy, but cleaning up the messes left behind by dirty energy.”

The report stressed the urgent need for federal action in light of the failure of state agencies to adequately oversee the impacts of mountaintop removal coal mining. It pointed to the revelation that Fraser Creek Mining in Kentucky appears to have violated the Clean Water Act more than 28,000 times, getting only a slap on the wrist in response, and suggested that while in some cases the permitting processes for mining facilities were initially scrutinized more closely or even resulted in permit denials, pushback from the industry has resulted in laxness and lack of follow-through.

It revealed that much of what was promised in the 2009 MOU has not not been acted upon and that there have been setbacks such as a cutoff in funding for the U.S. Geological Survey (USGS) study on the health impacts of mountaintop removal mining. And it asks Obama administration to follow through on its proposals.

Specifically, it asks for a Selenium Standard to guarantee citizens the ability to test for selenium pollution in their water, a strong Conductivity Rule to monitor dangerous high conductivity based on scientific research the EPA has already done, a Stream Protection Rule to preserve a strong stream buffer zone requirement so mining waste can no longer be dumped in streams and a strong Minefill Rule to address currently unregulated dumping of coal-burning waste into abandoned mine sites.

"Now is the time to get these policies on the books so future administrations can have something to work with,” said Ann League of Statewide Organizing for Community eMpowerment, a member group of the Alliance for Appalachia.

In addition, it urges that USGS funding for Appalachian health studies be restored, that review of Clean Water Act permits be improved, that the Army Corps of Engineers consider health impacts in permitting decisions and that stronger stakeholder engagement is implemented.

"Administration officials have offered to meet with representatives of the Alliance for Appalachia in bi­annual meetings and monthly conference calls to ensure that these concerns are addressed and yet have taken no action to do so," the report says. "Representatives from all agencies involved in the surface coal mining process should be in attendance at these promised gatherings. These participants should include, but not be limited to, enforcement, environmental justice, water quality and legal staff of pertinent agencies. This is the minimum engagement needed. For truly effective stakeholder engagement, agencies should be meeting with impacted communities on the ground near affected sites."

The report concludes, "Much work is needed to complete the MOU process, to ensure effective regulatory enforcement in our region, to create sound rule­makings, to strengthen citizen engagement and to invest in a bright future for Central Appalachia. We are a coalition of organizations that represent thousands of citizens who are ready to work. This report is a measure, an invitation and a call for the Obama Administration to do the same."