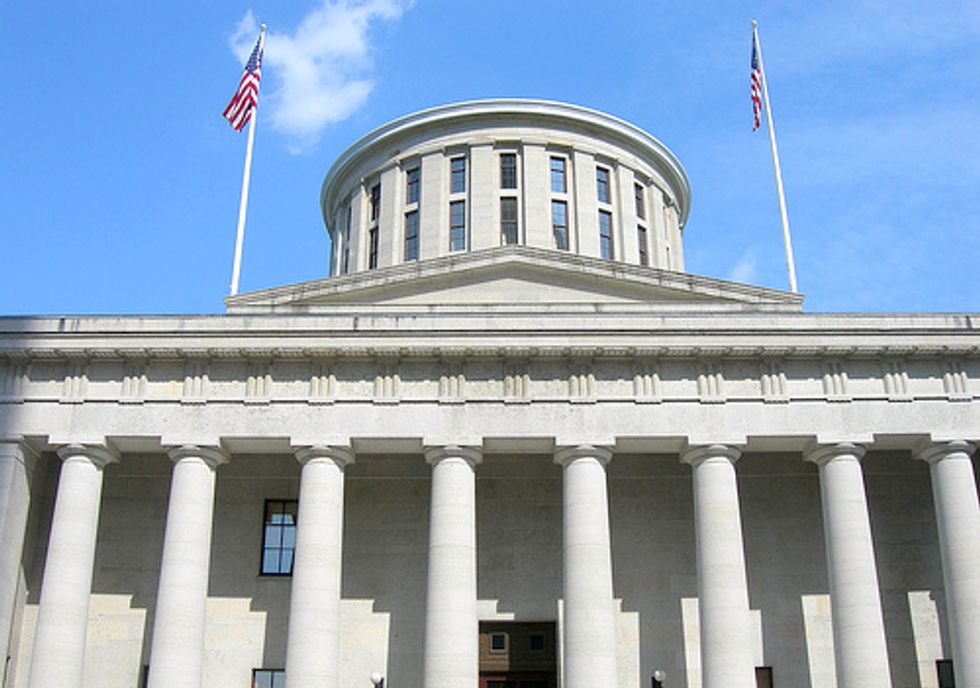 An anti-fracking rally on the West lawn of the Ohio Statehouse drew a diverse crowd of participants today. All were in support of exposing the inadequate proposed regulations in Gov. John Kasich’s S.B. 315, which had a hearing today in the Senate Energy and Utilities Committee.

Rally organizers released a new report, Ohio Oil and Gas Rules: A State Comparison of Selected Health and Safety Measures, which demonstrates that Ohio’s regulations are not at the forefront of state oil and gas rules.

Kari Matsko, director of the People's Oil & Gas Collaborative - Ohio, said, “In the report, we see that Pennsylvania requires baseline water sampling from 1,000 feet to 2,500 feet from the drill site. Ohio requires such testing only in urban areas and only up to 300 feet from the drill site. SB 315 proposes to increase that only to 1,500 feet for unconventional shale drilling. In addition, Texas communities can establish local health and safety measures whereas in 2004 the Ohio legislature removed our ability to do so.”

Those at the rally also announced that Rep. Bob Hagan (D-Youngstown) will be introducing a new bill to removing the “sole and exclusive” authority of the Ohio Department of Natural Resources (ODNR) over oil and gas issues, resulting in the return of local control to communities as it was prior to 2004 (H.B. 278).

Speakers came from all over Ohio to speak out against the destruction that unconventional fracking has caused in their communities. Speakers included Rep. Bob Hagan, retired police officer Ed Harsburger, Bill Baker—a resident of Mansfield, Alison Auciello of Food and Water Watch and Teresa Mills of Center for Health, Environment & Justice.

“Kasich’s S.B. 315 chemical disclosure regulations are ineffective,” said Teresa Mill, Ohio organizer for Center for Health and Environmental Justice. "It would only mandate negligible chemical disclosure 60 days after completion of all well operations and there are no requirements that hazardous waste be tested before being landfilled or buried on site.”

“We want to take the wool off the public’s eyes and show how the proposed changes in Kasich's energy plan to state shale gas drilling regulations would not protect our health and safety,” said Alison Auciello, Ohio organizer for Food & Water Watch. “Instead, we should be stopping fracking with the pieces of legislation that have been introduced, like the moratoria on fracking and fracking wastewater injection wells.”

“There are a number of pieces of legislation in the Ohio House Agriculture and Natural Resources Committee, like H.B. 351, that would provide real protections for public health and safety for Ohio citizens,” said Ellie Rauh, program coordinator at Buckeye Forest Council. “We need to ensure that the people have a chance to speak at the people’s house on these bills also, not just on the legislation that is being supported by the administration.”

The rally was organized by No Frack Ohio, a collaboration of more than 50 grassroots and conservation groups calling for a moratorium on horizontal hydraulic fracturing until further safeguards are put in place to protect human health and the environment. No Frack Ohio believes that public health and job security is more important than big industry’s immediate drilling demands.

The No Frack Ohio Campaign will continue to call on Ohio lawmakers to listen to Ohio citizens and scientific experts about the human and environmental damage caused by shale gas development.