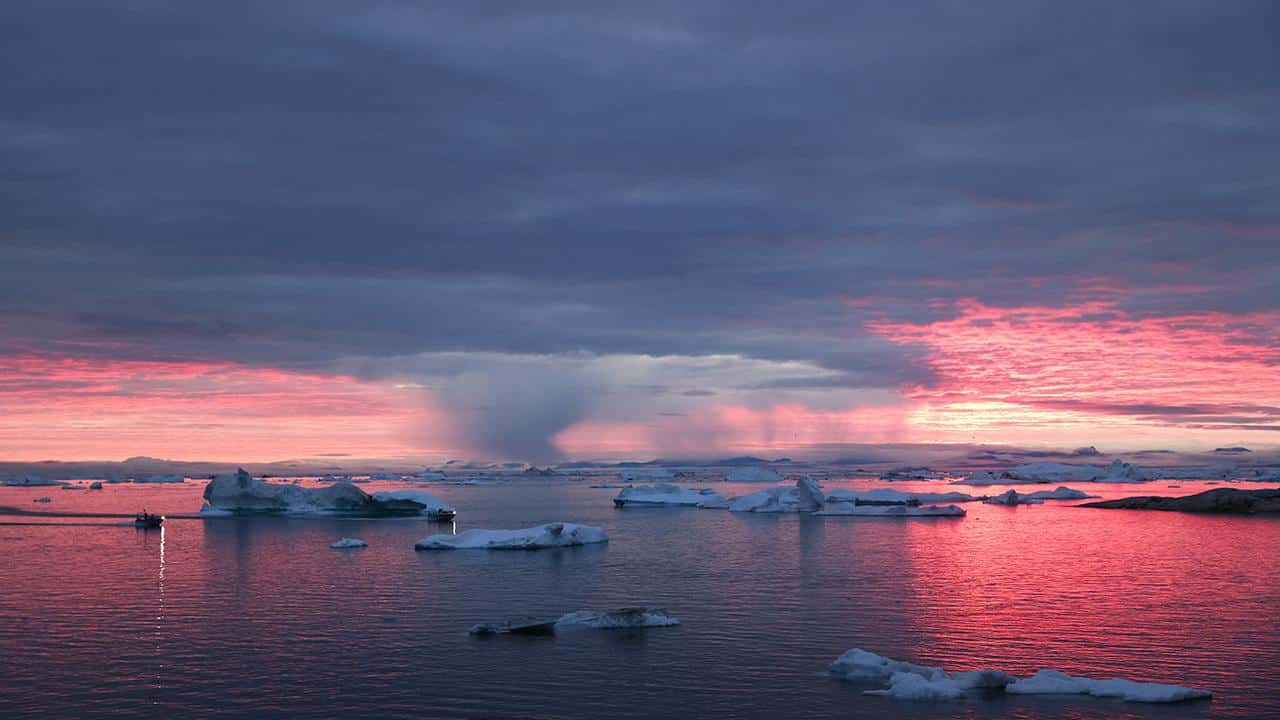 The sun sets as rain falls beyond floating ice and icebergs in Disko Bay above the Arctic Circle on September 4, 2021 in Ilulissat, Greenland. Mario Tama / Getty Images

As the climate continues to warm, rain will replace snow as the primary form of precipitation in the Arctic decades earlier than previously thought, according to research. This will have profound implications for the planet.

Snow still falls more frequently than rain in the Arctic, but the study suggests that will change. All the land and nearly all its seas will see more rain than snow before the end of the century if the Earth’s temperatures increase by three degrees Celsius. A global temperature rise of 1.5 to two degrees Celsius would still result in rain dominating the areas of the Greenland and Norwegian Seas.

“The transition from a snow- to rain-dominated Arctic in the summer and autumn is projected to occur decades earlier and at a lower level of global warming, potentially under 1.5C with profound climactic, ecosystem and socioeconomic impacts,” the scientists concluded in Nature Communications.

An analysis of the world’s current policies by watchdog Climate Action Tracker showed that the planet is on track for a temperature increase of 2.7 degrees Celsius if countries follow through with their plans to reduce greenhouse gas emissions, as reported by CNN.

“In the central Arctic, where you would imagine there should be snowfall in the whole of the autumn period, we’re actually seeing an earlier transition to rainfall. That will have huge implications,” research leader Michelle McCrystall of the University of Manitoba in Canada said, as reported by The Guardian. “The Arctic having very strong snowfall is really important for everything in that region and also for the global climate, because it reflects a lot of sunlight.”

The latest climate models showed that the central Arctic will become dominated by rain by the autumn of 2060 or 2070 if there is no reduction in carbon emissions, instead of by 2090, as earlier models had predicted. McCrystall and her colleagues found that the shift from snow to rain could be most pronounced in autumn.

“What happens if the Arctic doesn’t stay there,” McCrystall said, as reported by The Guardian. “You might think the Arctic is far removed from your day-to-day life, but in fact temperatures there have warmed up so much that [it] will have an impact further south.”

In August, scientists were stunned when rain was recorded on the summit of Greenland’s ice cap for the first time.

“Now all of a sudden, if you introduce liquid water into the picture and rainfall, there are a lot of engineering questions and things that could become really problematic for us in the future if this becomes a regular occurrence,” said National Science Foundation program officer, Jennifer Mercer, soon after rain fell on the summit of Greenland’s ice cap, as reported by The Washington Post.

The researchers called the implications, from melting permafrost to sea level rise, sped-up global heating and mass famine in the region’s reindeer and caribou populations, “profound.” Scientists believe that the quick Arctic warming could also be escalating floods and heatwaves in Europe, Asia and North America because of changes in the jet stream, according to The Guardian.