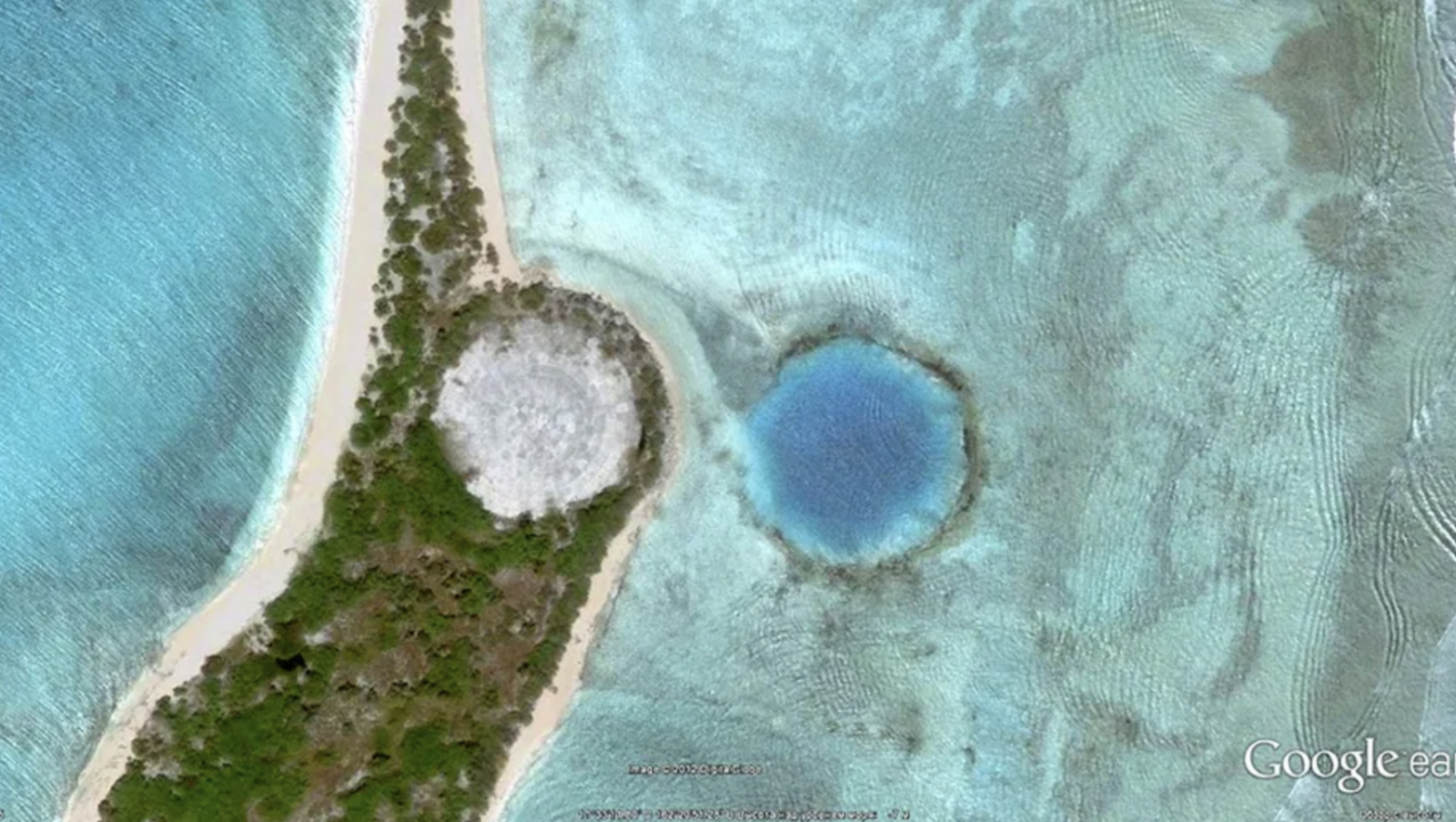 The 100-meter wide crater on Runit Island was deemed a good place to dump as much soil contaminated with plutonium as possible. Chunks of unexploded plutonium-239 were also disposed of in the hole. Google Earth

New research found high levels of radiation in giant clams near a 42-year old nuclear waste site in the Central Pacific. The findings have scientists concerned that pollution from the site is leaving the enclosed structure and leaking into the ocean and the food chain, according to the Los Angeles Times.

The radioactive clams were found near Runit Dome, which locals call “The Tomb,” on the Enewatik Atoll on the Marshall Islands. The clams are a local delicacy and popular in China, which has had a voracious appetite for them in recent years, according to the Los Angeles Times. Yet, the findings suggest that either radiation is oozing out of Runit Dome or the waste from past weapons testing was not adequately cleaned up.

From 1946 to 1958, the U.S. carried out 67 nuclear weapons tests at Bikini and Enewetak atolls, including the 1954 “Bravo” hydrogen bomb, the most powerful detonated by the U.S. It was about 1,000 times bigger than the atomic bomb dropped on Hiroshima during World War II, according to Aljazeera.

Radioactive ash fell more than 7,000 square miles from the test site and it blanketed the nearby islands. Children played in the white, powdery substance and ate it like it was snow, Marshall Islands health minister would later testify, according to the Atomic Heritage Foundation.

In 1977, the U.S. tipped soil and ash from the explosions into a crater on Runit Island and topped it with an 18-inch thick concrete dome. However, it was supposed to be a temporary fix and the bottom of the crater was never properly insulated, according to CBS News. After decades of exposure to the elements, cracks in the concrete are evident, raising concerns that a fierce tropical cyclone could breach the structure.

Recently, the UN Secretary General António Guterres addressed concerns over the legacy of nuclear testing. “The consequences of these have been quite dramatic, in relation to health, in relation to the poisoning of waters in some areas,” he said in Fiji, CBS News reported. “I’ve just been with the president of the Marshall Islands (Hilda Heine), who is very worried because there is a risk of leaking of radioactive materials that are contained in a kind of coffin in the area.”

According to a 2017 report by the Australian Broadcasting Corporation, the nuclear fallout included plutonium-239, an isotope that is one of the world’s most toxic substances, and one with a radioactive half-life of 24,100 years.

“The bottom of the dome is just what was left behind by the nuclear weapons explosion,” Michael Gerrard, the chair of Columbia University’s Earth Institute, told the Australian Broadcasting Corporation. “It’s permeable soil. There was no effort to line it. And therefore, the seawater is inside the dome.”

The U.S. Department of Energy scientists say that the shellfish with elevated radiation levels near Runit Dome are safe to eat in small quantities and are contaminated because of the initial nuclear testing, not because of any contamination leaking out of the dome, according to the Los Angeles Times. Yet, the scientists do admit that its groundwater, which leaks into the lagoon and ocean, is severely contaminated.

Yet, some locals who attended the Department of Energy’s presentation, cast doubt on the conclusions.

“What they’re saying is, here is the dome. And here, in the lagoon area, there is radiation. … But as far as leaking from the dome, we don’t think that’s the case?” said James Matayoshi, mayor of Rongelap Atoll, one of the atolls contaminated by fallout from the nuclear testing program, the Los Angeles Times reported. “That doesn’t make any sense.