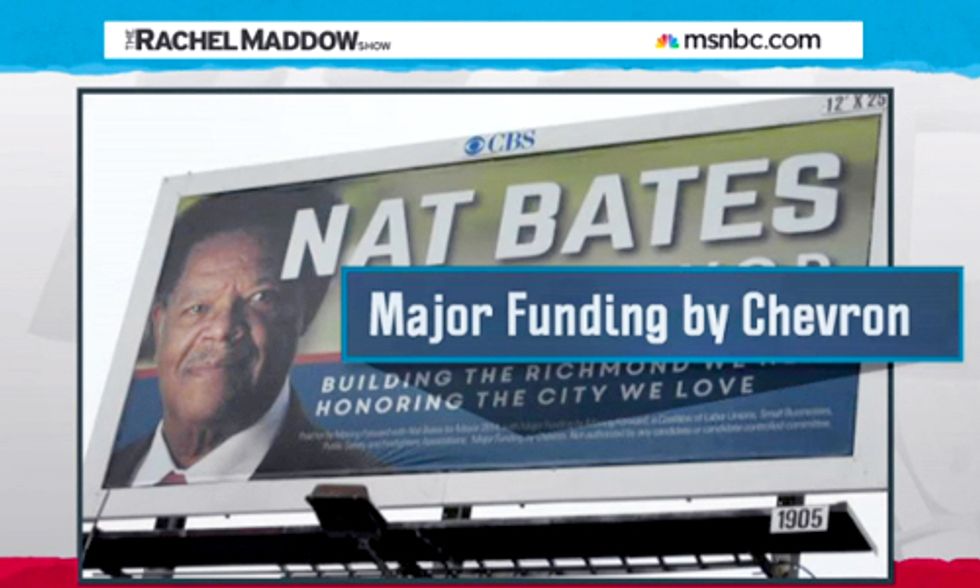 In August 2012, a rusted pipe inside a massive Chevron refinery in Richmond, California caused an explosion and fire that spewed toxic chemicals into the air, sending 15,000 people to the hospital for treatment.

Since then, the city of Richmond has been eager to impose new safety regulations on Chevron. A year after the fire, it filed a lawsuit against the company, citing its record of safety violations and disregard for public welfare going back to 1989. Chevron's response? As Rachel Maddow reported, they're trying to buy the city government of Richmond.

Fortunately, as Maddow points out, California requires all spending to be identified, so you can follow the trail of ads, billboards and mailers with the tag "Major funding by Chevron."

Chevron has dumped $1.3 million into the campaign of its favored candidate for mayor, buying billboards, glossy mailers and TV time. His opponent has raised about $22,000. The oil giant is also trying to purchase seats on the town's city council, ousting its progressive members and replacing them with people more friendly to itself. Its campaign spending in Richmond this year has reached nearly $3 million in this town of slightly more than 100,000 people. The LA Times reports, "Chevron's independent expenditure committee, Moving Forward, fashions itself as 'a coalition of labor unions, small businesses, public safety and firefighters associations.' But 99.7% of its funding comes from the oil company."

Chevron spends indirectly as well, sponsoring a website called the Richmond Standard, which disguises itself as a community news source while slanting its coverage of elected officials and candidates to demonize those it doesn't like and running stories that put a positive spin on Chevron's activities. Much of the information about Chevron's campaign spending has come out via Richmond Confidential, a website run by students at the University of California at Berkeley's school of journalism.

"For a corporation to manipulate a municipal election on this scale should be illegal," says L.A. Times writer Michael Hiltzik. "Chevron may pose as a company enjoying its free speech rights, as secured through the Supreme Court's 2010 Citizens United decision, but a pincer movement employing pantsfull of money and misleading, manipulative 'news' demonstrates the potential of a big company's speech to drown out every other voice."

This huge spending, Maddow pointed out, is the ultimate outcome of that decision, which approved unlimited spending in federal races and then expanded that to local races.