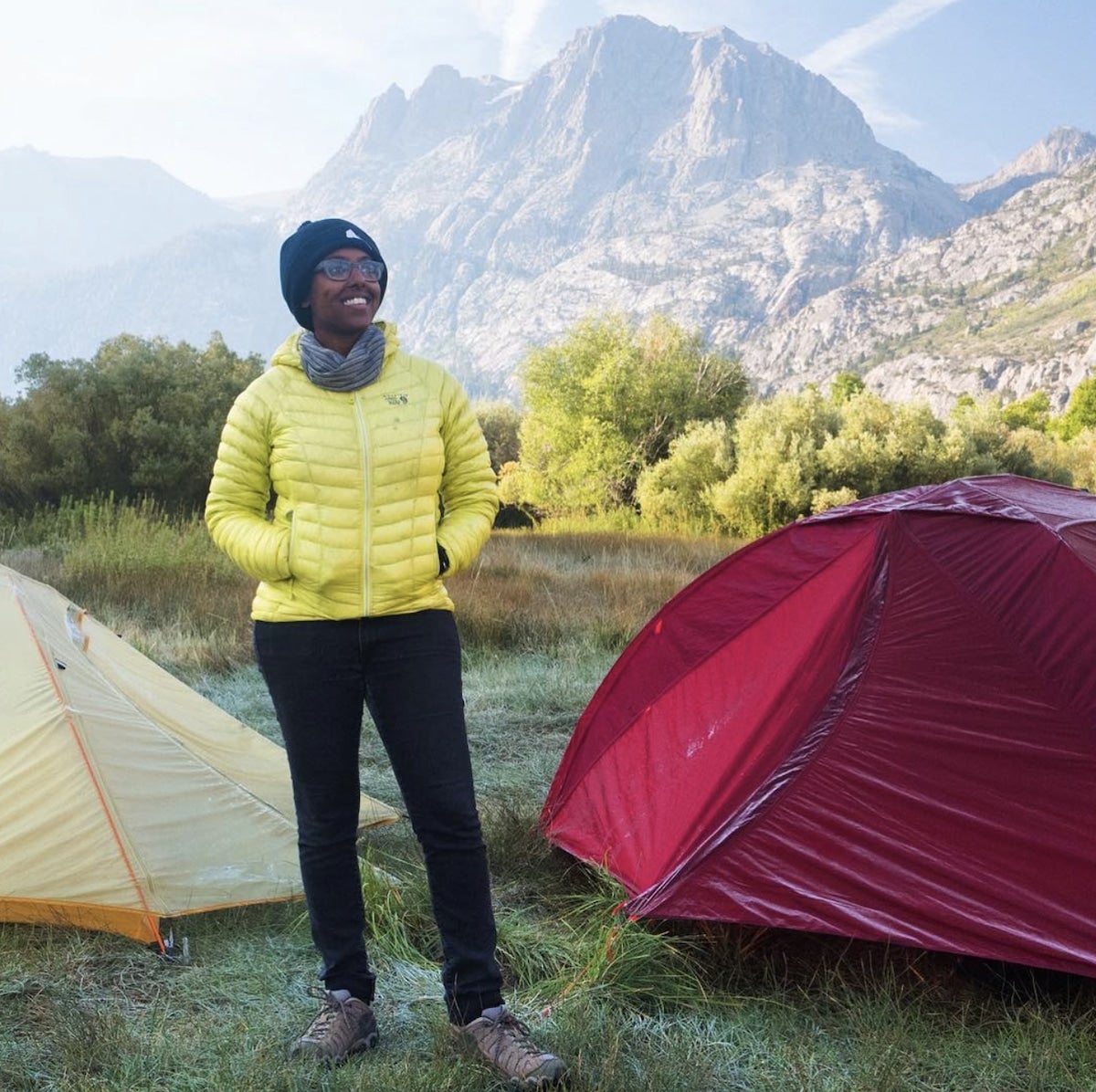 Outdoor recreation and the outdoor community have historically been portrayed as predominantly white, male spaces, in my experience, with little attention given to the contributions of queer recreationalists and outdoor advocates. Here are a few of the many queer environmentalists fighting for representation and access to the outdoors for all.

Wyn Wiley is a Nebraska-born drag queen and outdoor recreationist – sometimes both at the same time! What began as one video on a mountaintop in high-heeled boots turned into an Instagram following of 475,000 for Pattie Gonia, Wiley’s outdoor-focused drag persona.

Pattie breaks the mold of typical drag fashion with her garments inspired by nature and zero-waste concepts: dresses made from upcycled sleeping bags and winter coats, plastic bags, and fanny packs, paired with her iconic red wig. While her videos are sometimes silly – featuring comical dances in drag on beautiful vistas, a queer sasquatch character running through the woods, or a lesson on how to walk in heels with climber Alex Honnold – her messages are serious, and she advocates fiercely for climate action and inclusion in the outdoor community. She organizes group hikes and excursions for LGBTQ youth, and promotes the work of groups/nonprofits supporting queer recreationalists, including her newly-launched nonprofit, The Outdoorist Oath.

“I think what Pattie has shown me in my life is that queer community exists in the outdoors,” she said in an interview with Yale Climate Connections. “And the outdoors is such an essential place for any queer person to discover pieces of who they are, and to try out new versions of themselves – versions of themselves that are way more aligned than maybe the body they were born in or the identity that they have held onto because of society.”

As a nonbinary QTPOC (Queer & Trans Person of Color) with Turkish, Huanca, and Chinese lineages, Pınar Ateş Sinopoulos-Lloyd found empowerment away from the urban queer culture that often dominates the LGBTQ scene. Instead, they experienced healing in natural spaces, and wanted to share this experience widely.

Their studies of Queer Ecopsychology at Prescott College, School of Lost Borders, Wilderness Awareness School, Animas Valley Institute, Naropa University, and Esalen Institute eventually led to the creation of Queer Nature: a transdisciplinary “organism” co-founded with their spouse, So. The group provides environmental and nature-based education, teaching ancestral skills, rites of passage, and interspecies kinship, along with hosting multi-day immersions for LGBTQ2+ people. Through Queer Nature, Sinopoulos-Lloyd hopes to teach participants about wilderness self-reliance and other outdoor skills that have not historically been as accessible to the community.

Sinopoulos-Lloyd is also a founding member of Diversify Outdoors, and a co-founder of Indigequeers. As speaker and presenter, they have spoken at Stanford University and the Guggenheim museum with their spouse, and frequently present at the University of Colorado Boulder, Weaving Earth’s WE Immersion, and Colorado College. They also use their Instagram to share messages about neurodivergence, mental health, and ableism.

After seeing the strong racial and social class segregation in the wilderness community in the Pacific Northwest, Mercy M’Fon Shammah launched a Go-Fund-Me campaign that would eventually lead to the creation of Wild Diversity. Shammah is the founder and executive director of the Portland, Oregon-based organization that helps Black, Indigenous, all People of Color (BIPOC) & the LGBTQ2S+ communities get outside, create a connection to the outdoors, and feel a sense of belonging. “[A feeling] of belonging is [when] you don’t have to explain your existence,” they told Portland Audubon in a 2020 interview. “You don’t have to tell them why the outdoors should be a diverse place. You don’t have to code switch. You don’t have to talk or speak, act differently, behave any differently. You can be yourself and that’s welcomed and celebrated. To me, that’s what belonging looks like.” Before working with Wild Diversity, Shammah empowered women as a roller derby coach, training and hosting workshops in more than a dozen countries.

Jenny Bruso – a queer, plus-sized hiker with a strong Instagram following – found hiking later in life, and knows that the outdoors does not discriminate. They founded Unlikely Hikers with the knowledge that a relationship to the land is foundational in many cultures, so it should also be foundational in JEDI (justice, equity, diversity, and inclusion) efforts.

Unlikely Hikers is a “diverse, anti-racist, body-liberating outdoor community featuring the underrepresented outdoorsperson,” and fights against the narrow interpretation of outdoor people that is not representative of the true spectrum of adventurers, which includes plus-size & fat, Black, Indigenous, people of color, queer, trans and non-binary, disabled, and neurodivergent people. “I love that Unlikely Hikers is challenging people’s perceptions of who is outdoorsy and how they’re being outdoorsy, but my intention is not about challenging those perceptions,” they told National Geographic. “It’s about creating space for the people who are affected by those perceptions.” The group hosts hikes, usually of no more than 3 miles in length and 300 feet in elevation gain or loss to make events accessible to all participants. “There’s no ‘wrong’ way to get outdoors,” said Bruso. “There’s no body type that is outdoorsy, there’s no uniform, there’s no wrong way to move your body outside. It’s not a body type, it’s not a look, it’s not a skill set. All abilities, all disabilities — everybody has a place in the outdoors.”

During the summer of 2016, Rahawa Haile – a Black and queer Eritrean American writer from Miami – hiked the Appalachian Trail, which took her through many states that would soon vote for Donald Trump in the upcoming election. She wrote about her experience on the trail for Outside in 2017, which brought to light the racism experienced by Black hikers. “I am a queer Black woman, but I can’t parse the three — they’re not three separate parts of my identity,” said Haile. “But it felt like a vulnerable position. There were so many targets on my back, but I stood out most as a Black thru-hiker. There were many women on the trail but very few Black people.” She hiked under the trail name Tsehay, which means “sun” in her family’s language of Tigrinya, and hiked largely alone, passing through Confederate flag-laden territory all the way up into Maine.

Haile has spoken about the different forms getting outdoors can take, having grown up walking through Miami as a child, and taking the Metro-North into nature while living in Brooklyn. She acknowledges the healing brought by nature, as well as the danger faced by Black people in outdoor spaces. “The election changed things. In 2017, nobody asked me why I went to the woods. If anything, they asked how to do it,” she told Outside. “People wanted to escape. The past five years have been extremely traumatizing and downright depressing and life-shattering for many people.”

Look for her memoir of her thru-hike, In Open Country, from HarperCollins in 2023.