Quechua People Set for Showdown with Oil Company in Peru 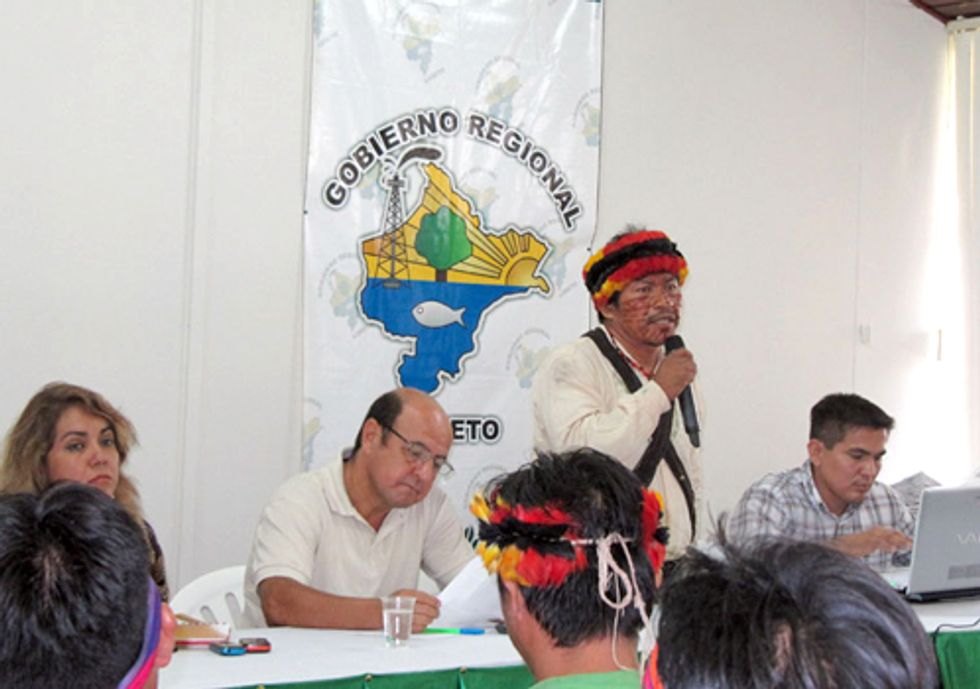 On March 26, the indigenous federation FEDIQUEP—the Spanish acronym for the Quechua Indigenous Federation of the Pastaza—demanded that the Regional Government of Loreto comply with agreements it signed last June in the so-called Acta Pastaza, which the Quechua celebrated as a landmark pact on social and environmental issues in a delicate cultural and ecological zone where PlusPetrol profits and pollutes at the expense of the local indigenous people.

The act included promises ranging from school construction, additional bilingual teachers, doctors and clinic staff for a remote region where the Peruvian state has little presence and indigenous communities are left to haggle with the PlusPetrol for services in a grossly unfair relationship that breeds dependency and sanctions abuse. The regional government also promised a baseline study of the environment and the health of the locals to assess the effects of 40 years of oil activities in the region.

In a letter submitted to Regional President Iván Vásquez Monday, and in a statement published online earlier by AIDESEP, the main Amazonian indigenous federation of Peru, FEDIQUEP gave the government 40 days to comply.

The silent ‘or else’ in this case carries an implied threat of direct action—a chilling echo of a similar standoff in 2008 that left a police officer dead, about two dozen activists in jail and cost PlusPetrol millions of dollars in damage and production stoppages that ultimately led to the Acta Pastaza.

Leaders said the decision to throw down such a public demand to which the government stands little chance of meeting in so short a time at such great distances as the Pastaza region poses, was not taken lightly. The call came only after community leaders experienced the initial elation over the passage of the Acta, then the let down when government officials stood them up on important dates and projects, and then the inevitable insult as PlusPetrol continues spilling oil and using divisionary tactics in the field unabated.

“They (the government) have not completed one thing,” said David Chino Dahua, second in charge of FEDIQUEP.  “Solo mas palabras”—just more words, he said.

The decision to thrown down the gauntlet was arrived at earlier this month when more than 150 leaders from FEDIQUEP base communities and other indigenous communities gathered at a rare assembly in the community of Santa Maria de Manchari.

“The attendees of the assembly recognized the value and importance of the Acta as a fundamental achievement in the struggle for their rights and the quest for the development of the Quechua People,” federation leaders said in a statement issued by PDDI, the federation’s legal advocate and legal partner of Alianza Arkana.

In the immediate celebratory wake of the Acta Pastaza in June, a new group was formed by leaders of many of the main river sheds of the region who all share the same problems with the oil companies operating in their region and with the regional and national governments, which they accuse of abandoning them.  The group, called PUINAMUDT—has petitioned and testified to Congress, the Peruvian prime minister and many other top government officials and has become a solid voice for the people of Loreto on issues related to oil.

In support of the Quechua demands in the Pastaza region and an ongoing blockade of a stretch of river by villagers in the Corrientes basin, PUINAMUDT has repeated its request for a special on-site investigation by the ministers from Energy and Mines and other agencies charged with environmental regulation known collectively here as the PCM. A delegation of PCM officials was due to meet with PUINAMUDT already on April 9, making the date crucial to averting a crisis of the sort all-too familiar in Peru.

The FEDIQEP leaders have also called for the nullification of contracts and agreements made with company officials under unfair conditions. They reaffirm their basic demands to be fairly compensated for the use of their territories and for accountability by PlusPetrol and Peru’s national oil company PeruPetro for environmental damages and cleanup.

They demand a full investigation and assessment of environmental impacts if PlusPetrol’s concession to operate in the Pastaza region is to be considered for renewal in 2014.

If push comes to shove on the Pastaza, Peru’s government faces one more fight in a mounting list of social-environmental conflicts.

In mid-March the national Ombudsman, known here as the Defensoria del Pueblo, reported 229 active or latent social conflicts in Peru, at least 133 of which were “social-environmental” conflicts over resources. The most recent, in Piura, left a man dead last week as locals fought off a natural gas project planned for a Pacific bay important for small-scale and sustenance fishing.

A crisis on the Pastaza could be a spark that unites a growing movement against the mining industry in the Andes with the battle over hydrocarbon exploitation in the Amazon.