Q&A with Bill Moyers: How the Grassroots Movement Must Rise to Challenge Corporate Control 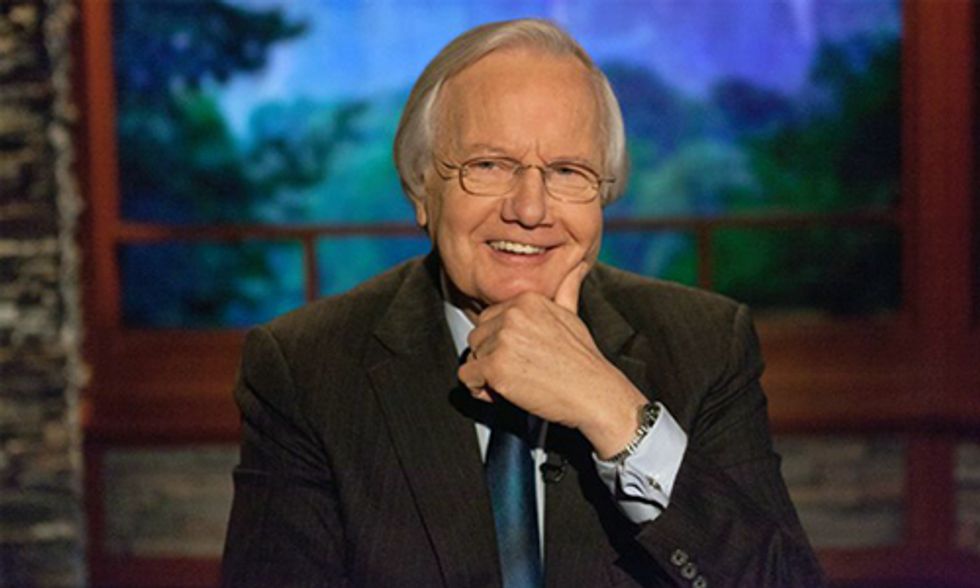 In late September, veteran journalist and public television host Bill Moyers, now eighty-years old, announced he was finally retiring (and yes, this time he means it) after more than 40 years as one of the nation's most trusted voices in news, politics and culture.

"We have to figure out how to have a morally-based conversation about politics and economics. If it's all about money and return on investment and stock shares and all that, instead of what kind of society works best for those who don't have such 'goods,' we're finished as a democracy," said Bill Moyers. Photo credit: Moyers & Company

Though he briefly left television in 2010 after his show Bill Moyers' Journal came to end, he and his team returned to public television with a new show, Moyers & Company, in 2012. Alongside a new web platform, BillMoyers.com, the show became a weekly assessment of current events with Moyers interviewing some of the leading voices and experts on economic, political, environmental and social issues.

However, in his note to viewers on Sept. 29, Moyers wrote that as the end of the third year of Moyers & Company approaches "it’s time finally to sign off."

He will do so, he said, "as the luckiest fellow in broadcast journalism for having been a part of public television for over half of my 80 years. I never expected such a full and satisfying run at work I could love so much, and I am deeply indebted to everyone with whom I have been associated on this long and rewarding journey."

Though the final show is scheduled to air on Jan. 2, Moyers took time on Thursday of this week to participate in an online Q&A with his viewers to discuss the nature of his work, plans for the future, and his current take on the key political issues that have been at the core of so much of his journalistic work.

The Q&A's lead-off question got straight to the point, with a participant asking Moyers to identify the three most important issues now facing the nation and to explain their significance.

"[1] We have to figure out how to have a morally-based conversation about politics and economics. If it's all about money and return on investment and stock shares and all that, instead of what kind of society works best for those who don't have such 'goods,' we're finished as a democracy, because some people will be able to buy anything they want and vast numbers of others will be unable to afford what they need. [2] The corruption of power and money is so pervasive and systemic that we have to take it on at every level, which requires that [3] there has to be a broad-based movement for democracy that mirrors and exceeds what Bill McKibben, 350.org and kindred spirits like Naomi Klein have built to reverse global warming."

A follow-up question targeted the familiar question among many progressives, which asked if it was time to do away with the two-party system that dominates U.S. domestic politics.

"Even if it were time, it's not going to happen," Moyers wrote. "The two parties are too entrenched in the rule-making process that enables them to make their own elimination impossible. Both parties have lost their footing, however, in the everyday experience of real people and they have to be challenged without remorse or retreat. Someone has said Left and Right have lost their footing, but the Right is more certain about what it wants. It wants control of the Republican Party. The Left is too content just to rent space in the attic from the Democrats. Until that changes, the Republican Party is going to be too extreme and the Democrats too enfeebled. Neither will change voluntarily because the people in charge have too great a stake in the status quo."

Moyers acknowledged the reality that a majority of people simply are not paying attention to these key political issues, but that this fact should not dissuade those who are paying attention from continuing to push for the necessary changes. "The fate of society—especially democracy," he said, "depends upon the minority of people who care enough to engage and stay engaged." He urged those viewing the conversation to engage with their neighbors and create what he called a "Committee of Correspondence" in order to foment local discussion and action. Moyers invoked the 20th century Wisconsin progressive Robert "Fighting Bob" LaFollette  who said that "democracy is a life" and one that "requires constant struggle."

And in a final word, Moyers offered this message:

The greatest challenge we face in America today is to stop the buying and selling of our politicians and political process by corporations and the rich. You may have seen the story earlier this week: For the first time ever the Vatican rented out the Sistine Chapel to a corporation—Porsche—for guests who paid $8,000 a head to attend a concert there. For the first time a corporate donor determined who could be invited to that sacred place. That's what has happened to democracy. Either we reverse Citizens United and insist democracy is about equal representation, or we might as well close up shop.

What follows is a sampling of some of the other questions submitted and the responses offered by Moyers:

Q: What do you think is the single most important thing everyday people can do to get the country back in balance?

Join with someone else like-minded and keep adding others. For example, suppose two of you, six of you, 60 of you showed up at the next public event where your Member of Congress is asking for your vote, circulate printed records of who has contributed money to him/her, and start peppering him/her with questions. Then be at the next  rally, or if it's where you can't get to, use your "Committee of Correspondence" to alert the one(s) near where he or she will next appear.

Q: Do you support a Constitutional amendment to get the money out of politics and end corporate personhood?

Yes. One that says: "Corporations are not people. Money is not speech."

Q:  I marched on Sept. 22 with 400,000 others in the People's Climate March. My mother marched on the first Earth Day, 1970. After that one, impressive strides were made toward cleaner air and sustainability. This time, I get the feeling that news of the march has been suppressed; beyond the choir that marched, few have even heard of it. What is your take?

Corporate media largely ignored it—you are right. And then, three days after the march the U.S. started bombing in Syria and Iraq and stories about the march and climate change were driven from the news. Fortunately, we still have the web to create alternative media to spread the word.

Q: How do you stay optimistic in the face of all the serious problems we are facing?

I'm not always optimistic. Sometimes I despair. But reading history helps (in fact, I strongly urge all of you to seek out and read Frank Rich's stunning article on the cover of New York Magazine about the year 1964—and so many of us fooled ourselves about the nature of progress. Perspective helps: I don't think anything we are facing today, except for global warming, is more than my grandparents and my parents faced. Remember, they lived through the First Gilded Age or the Roaring Twenties that flamed out into Great Depression. World War II. The Holocaust. Sustained racism. The Korean War. Vietnam. And so on. So I take heart that if they tackled their generation's challenges, we can, too.  Furthermore, as the political scientist Gramsci said (and I may not have it exactly): Practice the pessimism of the mind—see the world as it is without rose colored glasses; but also practice the optimism of the will—do whatever you can, wherever you are, to make this a better world. We have to keep criticizing what's wrong, but we are also obligated to act to change what it is we are criticizing.

Q: You are one of the best, if not the best, interviewers today. What makes a great interview? How do you approach each interview?

Thanks. For me the key is editing. Anyone can go on at length in a conversation, but bringing a long conversation down to its essence without the guest feeling exploited requires a team of people devoted to that purpose, and I have that kind of team: researchers, producers, editors, colleagues. It also takes sustained preparation—either from life experiences or focused study. I read widely, keep notes, clip articles, and then from a thorough briefing book prepared by that team I mentioned, I try to outline what interests me and what might interest you (the viewer). That road map helps even when spontaneity seizes either the guest or me. We usually converse for an hour and what you see on the screen is our best effort to do justice to what the guest truly wanted to say. I've been at this for 41 years and cannot remember a single guest who complained he or she was misrepresented, even when I am disagreeing.

Q:  As the next generation of journalists get their chops, who would you suggest we listen to or read?

There are so many I couldn't begin to single them out. For all the woes of newspapers and all the shallowness of television, there is world-class journalism happening today in every medium. "Search and ye shall find" those who move, inform, and inspire you. We're experiencing a surge of long-form journalism in books, and I'll post some of my favorites at billmoyers.com before my last broadcast on Jan. 2.