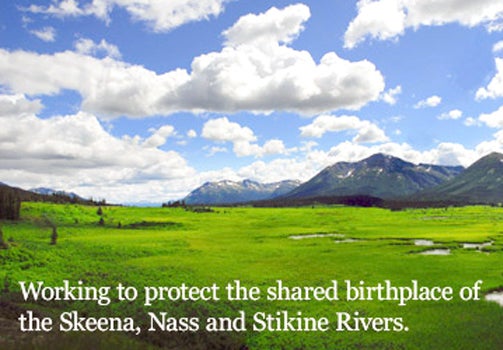 The B.C. government announced today that Shell would be withdrawing its plans to develop coalbed methane in the Klappan-Groundhog tenure area in northwest British Columbia. The government will also not issue oil and gas tenures in the area in the future.

“Eight years ago, northern B.C. communities joined together to say ‘no’ to coalbed methane and ‘yes’ to wild salmon,” said Skeena Watershed Conservation Coalition executive director Shannon McPhail. “Today is an incredible day for residents of the Skeena, Nass and Stikine watersheds. We are grateful and proud that First Nations and communities from the watersheds came and stood together. The B.C. government and Shell deserve recognition for listening to these communities and making a decision that will protect salmon cultures and livelihoods.”

This region, better known as the Sacred Headwaters, became the source of controversy in 2004, when Shell drilled three test wells in the area. Blockades and public rallies across the northwest ensued in 2005 and 2006. International protests were also held at Royal Dutch Shell headquarters in The Hague. Due to opposition, the Province imposed a moratorium on coalbed methane development in the area in 2008, which was set to expire on Dec. 18.

“Shell has backed away from a project only a handful of times. The powerful, relentless movement led by the courageous Tahltan and supported by nearly 100,000 people from around the world has not only stopped Shell, but persuaded the BC government to permanently protect the region from any further gas development,” said ForestEthics Advocacy senior conservation campaigner Karen Tam Wu. “It’s an inspiring day when communities in northern B.C. can stand up to one of the largest oil companies in the world and win. Congratulations to the Tahltan, and to the citizens and government of British Columbia.”

Highlights of the campaign to protect the Sacred Headwaters include:

The Sacred Headwaters is located in northwest British Columbia, about 600 kilometres north of Terrace, B.C. The region is home to a diversity of wildlife, such as grizzly bears, caribou and moose. Shell’s plans would have seen thousands of gas wells and thousands of kilometres of roads built at the headwaters of the Skeena, Nass and Stikine rivers—three of B.C.’s top salmon-producing rivers. The headwaters were listed on the Outdoor Recreation Council’s Most Endangered Rivers list for the past three years.