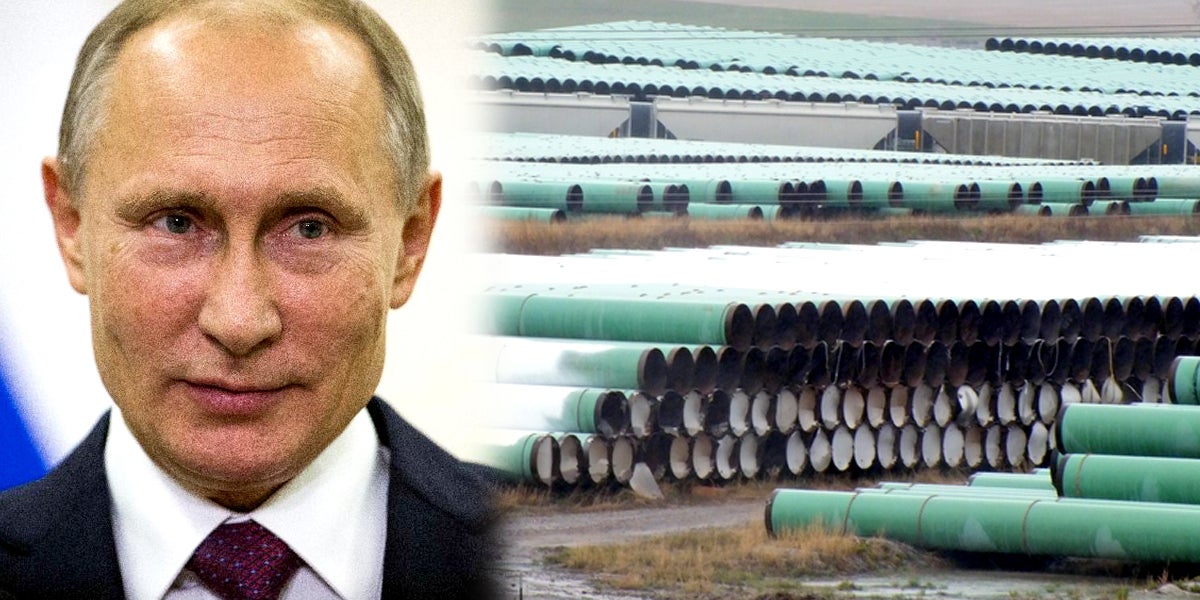 By Steve Horn and Itai Vardi

Believe it or not, there’s a key connection to Russia and its president, Vladimir Putin, in the fight over North America’s controversial Keystone XL pipeline.

One of President Donald Trump’s first actions in office was to sign an executive order on Jan. 24 expediting the approval of the Keystone XL. Owned by TransCanada, this tar sands oil pipeline was halted by former President Barack Obama in November 2015. Trump signed another order on Jan. 24, calling for steel for U.S. pipelines to be made in the U.S. to the “maximum extent possible” and two days later TransCanada filed a new presidential permit application for Keystone XL with the U.S. Department of State.

Critics, such as John Kemp of Reuters, pounced on the caveat language in Trump’s steel order and noted that it appears “designed to preserve lots of wiggle-room.” In fact, a DeSmog investigation reveals that much of the steel for Keystone XL has already been manufactured and is sitting in a field in rural North Dakota.

DeSmog has uncovered that 40 percent of the steel created so far was manufactured in Canada by a subsidiary of Evraz, a company partly owned by Russian oligarch Roman Abramovich, who is a close ally of Putin and a Trump family friend. Evraz has also actively lobbied against provisions which would mandate that Keystone XL’s steel be made in the U.S.

Abramovich is described in the 2004 book Abramovich: The Billionaire from Nowhere by British journalists Dominic Midgley and Chris Hutchins as “one of the prime movers behind the establishment of the only political party that was prepared to offer its undiluted support to Putin when he fought his first presidential election in late 1999. When Putin needed a shadowy force to act against his enemies behind the scenes, it was Abramovich whom he could rely on to prove a willing co-conspirator.”

Evraz describes itself as “among the top steel producers in the world based on crude steel production of 14.3 million tonnes in 2015.”

DeSmog’s findings comes as Trump is under scrutiny from Congress, U.S. intelligence agencies and others for his personal and presidential campaign team’s ties to Russia. The Office of the Director of National Intelligence concluded in January that Russian state-sponsored actors had hacked into the email databases of both the Democratic National Committee and presidential candidate Hillary Clinton’s campaign in order to influence the election in favor of Trump.

Before this, however, Sibneft merged in 2003 with the company Yukos, then owned by Russian oligarch Mikhail Khodorkovsky, in an attempt to create what was envisioned as a competitor to the likes of ExxonMobil. Had it materialized, the resulting company, called Yukos-Sibneft, would have been at that point the fourth largest oil producer in the world.

Under pressure from Putin, however, and with what was reported as the helping hand of Abramovich, the deal was called off and Khodorkovsky ended up arrested and then jailed for eight years for alleged tax evasion and fraud. Abramovich’s personal wealth doubled as a result of the later Sibneft-Gazprom merger.

The Telegraph reported that Abramovich met with Putin before the Yukos-Sibneft deal was tossed to the curb.

“The revelation of the meeting will fuel suggestions that the Kremlin is closely involved with the fate of the two companies,” The Telegraph wrote at the time. “Many industry commentators saw [the] decision to halt the merger as a government-backed effort to further weaken Mikhail Khodorkovsky, the former chief executive of Yukos and its largest shareholder.”

Abramovich’s influence would continue in the years ahead. The 2010 book The Crisis of Russian Democracy: The Dual State, Factionalism and the Medvedev Succession, written by Richard Sakwa, further describes Abramovich as someone “whose wealth in the Putin years increased at least tenfold and he remained one of Putin’s closest confidants” while Putin carried out his first term as president.

“It was Abramovich who in the first place had recommended Putin to [Boris] Yeltsin as successor and Putin took his advice” when Putin was succeeded by Dmitry Medvedev, according to Sakwa, a professor at the University of Kent (UK).

Dmitry Skarga, former head of Russian state-owned shipping company Sovcomflot, told BBC in its documentary, Putin’s Secret Riches, that he personally oversaw the transfer of a yacht worth $35 million from Abramovich as a gift to Putin (see video below beginning at 12:28).

Today, Abramovich is perhaps best known as the owner of the English Premier League soccer team, Chelsea Football Club. Abramovich has a net worth of $9.2 billion and sits in 151st place among the world’s wealthiest people, according to Forbes.

In 2015, Abramovich also announced plans to invest $15 million in the company Propell Technologies Group, to do what OilPrice.com described as “‘clean’ hydraulic fracturing” or “fracking.”

“This will not merely be a $15 million investment,” a source with knowledge of the deal told OilPrice. “You have to read between the lines here. Abramovich doesn’t do anything small. He’ll get the infrastructure in place and then look to acquire a significant position in the U.S. oil sector at today’s fire sale prices. We’ll probably be looking at hundreds of millions in investment at the end of the day.”

Operators use fracking to tap into North Dakota’s Bakken Shale, the most productive oilfield in the U.S. TransCanada’s presidential permit application submitted to the State Department says that the proposed Keystone XL pipeline will also have a Bakken on-ramp called the Bakken Marketlink, which would feed the field’s oil into the pipeline as a companion to the tar sands crude coming from Alberta, Canada.

Ivanka Trump, the daughter of President Donald Trump, maintains her own ties to Abramovich. Ivanka’s circle of friends includes Dasha Zhukova, the wife of Abramovich.

Jake Sherman, a reporter for Politico, tweeted that Zhukova attended Trump’s presidential inauguration at the invitation of Ivanka. The two have appeared in public on several occasions, most recently during the U.S. Open tennis tournament, which Ivanka attended with her husband and top Trump aide, Jared Kushner.

Also sitting with them in the stands at the U.S. Open was Zhukova’s friend, model Karlie Kloss, who is dating Jared Kushner’s brother, Joshua Kushner. Zhukova, as it turns out, was a donor to Hillary Clinton’s presidential campaign, giving $2,700 to the campaign and another $33,400 to the Democratic National Committee for its 2016 electoral efforts.

“Pipe To Be Made”

Evraz owns three steel mills in the U.S., but the company chose to manufacture the pipe for the Keystone XL project in its Regina mill in Saskatchewan, Canada. By 2015, that mill had produced 550 miles of steel pipe for the line.

Though TransCanada’s presidential permit application says nothing about where its steel will be (or has already been) manufactured, it does detail that the steel used for the pipeline will meet industry standards set by the American Petroleum Institute.

While TransCanada has paid for the pipe already produced by Evraz, according to TransCanada spokesperson Terry Cunha, the continued construction of the Keystone XL pipeline could lead to even more profits for Abramovich’s company, whether it manufactures the steel in its Canadian or U.S. factories.

Cunha told DeSmog that the company is waiting for final regulatory details from the U.S. Department of Commerce about how implementing the steel manufacturing executive order may impact Keystone XL’s pipes. Commerce Department officials did not respond to repeated requests for comment.

When Obama nixed Keystone XL, Evraz issued a statement declaring its intent to stand by TransCanada for the long haul on the project.

“Like TransCanada, Evraz believes that Keystone XL is in the best interest of Americans and Canadians and we will support TransCanada’s continuing efforts toward getting the pipeline built,” the company said in November 2015. “We will also continue to work with pipeline partners on other pipeline projects in process across North America that will increase energy security and support economic vitality.”

Bill Edwards, president of United Steelworkers union Local 5890—which represents 900 workers at the Regina facilit —told the British publication Metal Bulletin in November 2011 that the delay for Keystone XL had led to 250 job layoffs and shuttering of line pipe productions. Edwards said Evraz would continue production once TransCanada gets the needed permits.

“There is a bunch (of pipe) on the ground waiting to be installed. But there is still a pile (of pipe) to be made,” Edwards told the Bulletin.

Perhaps an indication of Evraz’s stance on the Trump steel executive order, Evraz lobbied in the first quarter of 2015 against what it called the “Buy America” amendment proposed by U.S. Sen. Al Franken (D-MN) for the Keystone XL Pipeline Act (S.1) of 2015 introduced by U.S. Sen. John Hoeven (R-ND). The company also lobbied for “Amendments to U.S. Trade laws to improve steel industry enforcement.”

Office of the Clerk, U.S. House of Representatives

Franken’s amendment, which did not pass, was similar to Trump’s order. It stated that “to the maximum extent consistent with the obligations of the United States under international trade agreements, none of the iron, steel or manufactured goods used in the construction of the Keystone XL Pipeline and facilities approved by this act may be produced outside of the United States.”

Neither Evraz nor its lobbyist John Stinson provided a comment for this story, with Evraz pointing DeSmog to its Jan. 24 press statement.

“EVRAZ North America applauds the Trump administration for advancing the Keystone XL and Dakota Access pipelines,” reads the statement. “As the North American leader in large diameter pipe production with assets in the United States and Canada, we look forward to working with our customers and the Administration to make these projects a reality.”

Given a summary of DeSmog’s findings, Tyson Slocum, energy program director for Public Citizen, a Washington, DC-based consumer watchdog and advocacy group, has called for an investigation.

“An investigation into communications between Trump and his administration and Abramovich and Russian Federation officials is needed to determine whether Trump’s Keystone executive order was influenced by personal financial relationships,” Slocum told DeSmog.