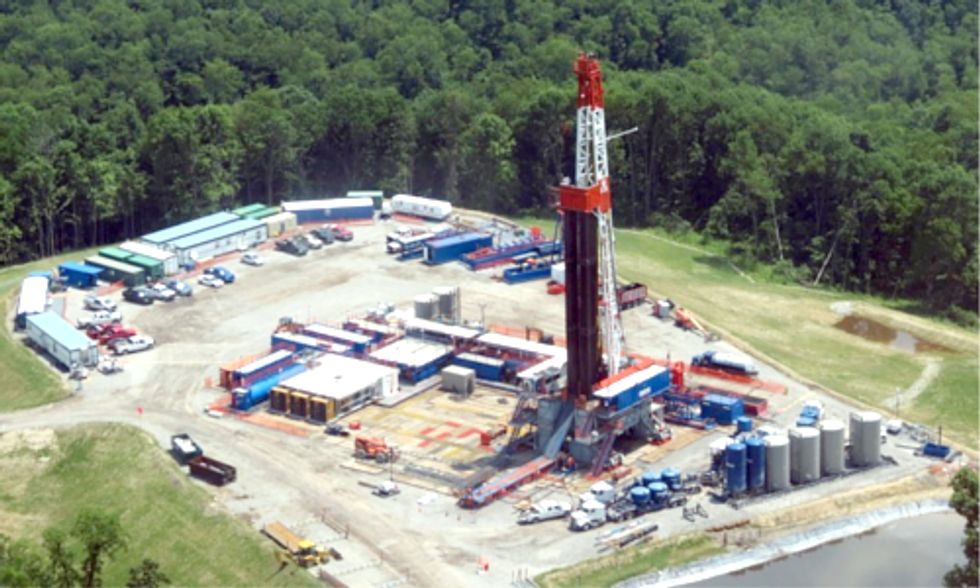 Because natural gas has less carbon than dirty coal, gas producers and even the United Nations Intergovernmental Panel on Climate Change have applauded it as a cleaner alternative. Hopefully, a joint study from researchers at two universities will change that.

Purdue and Cornell universities on Monday released a study in the Proceedings of the National Academy of Sciences of the United States of America with data on higher-than-expected methane levels found above shale gas wells.

Purdue and Cornell researchers flew over well pads like this one in Southwestern Pennsylvania to discover higher-than-expected methane levels during the production of natural gas. Photo credit: Dana Caulton/Purdue University

"This small fraction of the total number of wells was contributing a much larger large portion of the total emissions in the area, and the emissions for this stage were not represented in the current inventories," Paul Shepson, a professor of chemistry and earth atmospheric and planetary sciences at Purdue, said in a statement.

By flying in the specially equipped Purdue Airborne Laboratory for Atmospheric Research, the researchers were able to identify methane plumes from both single and group pads. The plumes give off signals about the production state of the gas.

A look at the Purdue Airborne Laboratory for Atmospheric Research, which was used to identify methane plumes from natural gas production in Southwestern Pennsylvania. Photo credit: Paul Shepson/Purdue University

"It is particularly noteworthy that large emissions were measured for wells in the drilling phase, in some cases 100 to 1,000 times greater than the inventory estimates," Shepson said. "This indicates that there are processes occurring—e.g. emissions from coal seams during the drilling process—that are not captured in the inventory development process. This is another example pointing to the idea that a large fraction of the total emissions is coming from a small fraction of shale gas production components that are in an anomalous condition."

According to the White House, methane has about 20 times the global warming effect of carbon dioxide. That's why President Barack Obama announced a new layer to his Climate Action Plan in March to reduce methane emissions, though many environmental groups thought it was not aggressive enough. Before that, the Environmental Defense Fund EDF and ICF International jointly concluded that the onshore oil and gas industry could collectively reduce methane emissions by at least 40 percent below 2018 projections. Methane emissions have dropped by 11 percent since 1990.

The researchers blame the bottom-up approach for inaccuracy of previous methane emissions in the area they explored. Cornell University's David R. Atkinson Center for a Sustainable Future funded the fly-over project.

"We need to develop a way to objectively measure emissions from shale gas development that includes the full range of operator types, equipment states and engineering approaches," Shepson said. "A whole-systems approach to measurement is needed to understand exactly what is occurring."