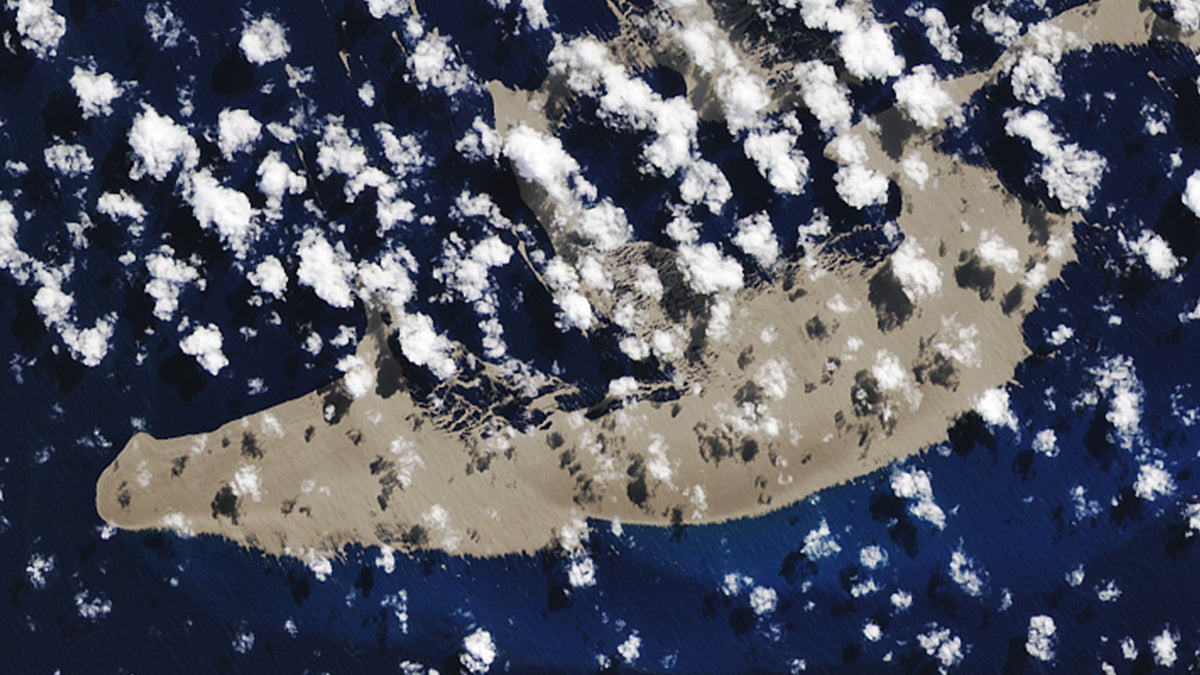 The pumice raft as seen from space on Aug. 13. NASA Earth Observatory

A Manhattan-size raft of pumice stones ― believed to be the result of an undersea eruption near Tonga ― is floating on the Pacific Ocean towards Australia, CNN reported Monday. The pumice carries with it marine organisms like crabs and corals that experts say could bring new life to the iconic reef, which lost about half its corals to back-to-back bleaching events in 2016 and 2017.

“Based on past pumice raft events we have studied over the last 20 years, it’s going to bring new healthy corals and other reef dwellers to the Great Barrier Reef,” Queensland University of Technology geologist Scott Bryan told The Guardian.

Pumice is formed by lava sent up from underwater volcanoes, the National Aeronautics and Space Administration (NASA) Earth Observatory explained. Because it is lighter than water and full of holes, it floats.

In a 2012 study reported by CNN, Bryan and others found that pumice rafts are one way that the ocean redistributes marine life.

This particular raft was first spotted by NASA satellites and sailors Aug. 9. On Aug. 15, Australian couple Michael Hoult and Larissa Brill encountered the raft while sailing to Fiji on the catamaran ROAM and posted a detailed account on Facebook, as NPR reported.

“We entered a total rock rubble slick made up of pumice stones from marble to basketball size. The waves were knocked back to almost calm and the boat was slowed to 1kt. The rubble slick went as far as we could see in the moonlight and with our spotlight,” the pair wrote.

On Aug. 9, Shannon Lenz also sailed through the pumice near VaVa’u. She posted a video of the experience on YouTube.

The field is 58 square miles and is expected to reach Australia’s coast in seven to 12 months.

“It’s the right timing. So it will be able to pick up corals and other reef building organisms, and then bring them into the Great Barrier Reef,” Bryan told The Guardian. “Each piece of pumice is a rafting vehicle. It’s a home and a vehicle for marine organisms to attach and hitch a ride across the deep ocean to get to Australia.”

However, there are some risks. The pumice could bring invasive species, Bryan warned CNN. It is also challenging for corals to settle in a new area. They can’t just jump off of the pumice and onto new habitat like crabs can, for example. They have to wait till they are ready to reproduce and then send off larvae that will attach elsewhere. But if the pumice fills with water and sinks, the corals could start to grow and spawn from the sea floor, Bryan explained.

In the midst of the climate crisis, the Great Barrier Reef needs all the reinforcements it can get. A study published this month found that the longer, more frequent and more extreme marine heat waves brought on by climate change can kill the coral animal itself faster than the death by starvation associated with bleaching, when the coral expels the algae that gives it food and color.