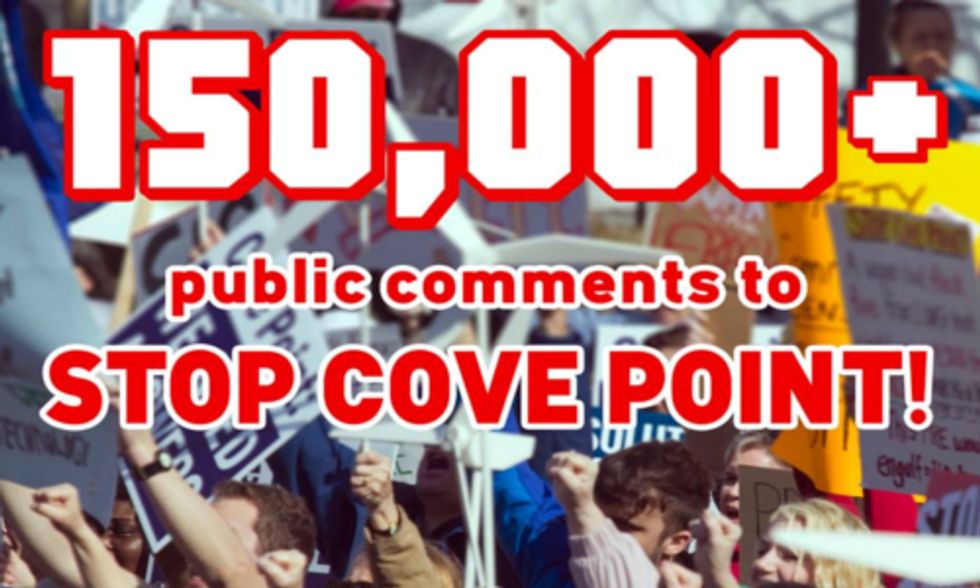 Monday marked the end of a contested 30-day public comment period on the Federal Energy Regulatory Commission’s (FERC) draft Environmental Assessment for the controversial $3.8 billion plan, proposed by Virginia-based Dominion Resources, to export liquefied natural gas (LNG) from Cove Point, MD. Dominion’s plan is to convert an existing import facility into an export facility and to pipe fracked gas from the Marcellus shale to southern Maryland, liquefy it and export it to be burned in Japan and India.

FERC’s environmental assessment has been widely criticized for failing to address the project’s role in speeding fracking across Appalachia, worsening the climate crisis and threatening the safety of nearby residents in Calvert County with potential explosion and fire catastrophes. The facility, located next to a residential community, is only three miles from a nuclear power plant and 50 miles from Washington, D.C.

More than 150,000 comments flooded FERC, arguing that it is clear that without analyzing the foreseeable cumulative impacts this project would have on the environment throughout the 64,000 square mile Chesapeake Bay watershed, FERC’s determination of a “Finding of No Significant Impact” is arbitrary and capricious and violates the National Environmental Policy Act.

The U.S. Environment Protection Agency’s (EPA) says that FERC should weigh gas production stimulus effect of the Cove Point export facility. In its comments filed on Monday, the EPA states “Both FERC and DOE [U.S. Department of Energy] have recognized that an increase in natural gas exports will result in increased production.” But somehow FERC concludes, "it is not feasible to more specifically evaluate localized environmental impacts."

It is clear that the Cove Point export facility will drive expansion of fracking for natural gas across the entire Chesapeake region in Pennsylvania, Virginia, West Virginia and in Maryland, where no drilling has yet occurred. The export valve will open and the race to frack will explode. In many states, fracking has resulted in drinking water contamination, air pollution, fish kills, illness, forest fragmentation and even earthquakes. In addition, each fracked well requires millions of gallons of water, often depleting local waterways, and produces millions of gallons of toxic and radioactive wastewater.

This project will mean more landscapes and communities will be transformed with fracking wells, pipelines, compressor stations and new roads carrying thousands of trucks, turning once rural and pristine areas—including farms, public parks and forests—into industrial sacrifice zones so energy companies can ship our natural gas elsewhere. Further, the nation’s largest estuary, the Chesapeake Bay, would be highway for thousand-foot long tankers to transport the liquefied gas, exposing the treasured Bay to invasive species and worsening the “dead zone” in the Bay through dumping of polluted ballast water.

A major Pennsylvania fracking company—Cabot Oil & Gas—has already committed to pipe gas to Cove Point for export. Dominion’s plan includes connecting to the interstate natural gas transmission systems of Transcontinental Gas Pipeline Company, Columbia Gas Transmission and DTI, which would pipe gas to Cove Point from a wide range of regions in the U.S. Pipelines, which are also under FERC’s jurisdiction, are being proposed throughout the Susquehanna River basin, and across the Gunpowder River watershed—which includes the drinking water source for the city of Baltimore—all to pipe natural gas to Cove Point. These pipelines, which inevitably leak and rupture causing dangerous explosions and fires, would snake through our waterways, drinking water sources, backyards and farms. Yet, the environmental assesment fails to analyze impacts of natural gas development, despite information about where Dominion's customers will source the gas and plans for new pipelines designed to shuttle gas to Cove Point.

The fact that FERC did not relate the facility at Cove Point to the “fracking process” and analyze the consequences is a fundamental flaw, making the analysis meaningless. The more than 150,000 comments that were sent to FERC on Monday say loud and clear that they don’t buy FERC’s meaningless assessment.

The fight against this fracked gas export facility has been long, but it’s not over. This week, several organizations and individuals are participating in a blogathon to reach out across the Chesapeake Bay region and the nation to decry the unchecked march to export our natural gas at the expense of our rivers, streams, bays, forests, farms and communities.

Next week, hundreds of people will join a week-long picket line at FERC to protest the rubber stamping of this project. On July 13, thousands of people will gather in Washington, D.C. to rally and march against fracked gas exports at Cove Point and beyond.