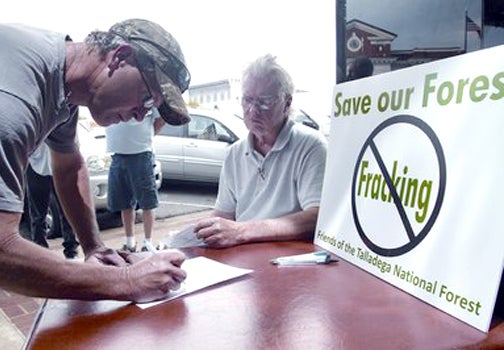 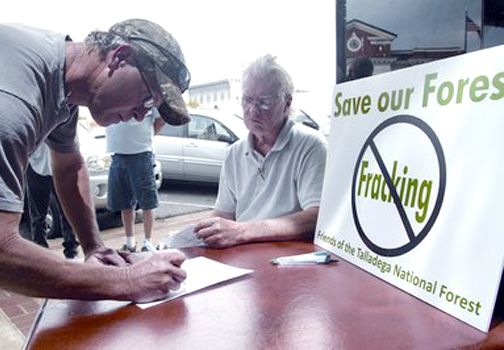 The Forest Service and the U.S. Bureau of Land Management (BLM) have said they are delaying the June 14 sale of gas drilling leases on almost 43,000 acres of public lands in the Talladega National Forest, a proposal which has sparked widespread and vigorous opposition from local citizens and some elected officials. Following a story that broke in the Washington Post on June 8, the agencies issued a press statement announcing they would delay the lease sale to allow time for public engagement, including public informational meetings.

Wild South, Friends of the Talladega National Forest and concerned citizens in Alabama have collected more than 7,000 signatures over the past few weeks from people opposed to the sale of oil and gas leases in Alabama’s National Forests.  The signatures were submitted this week to the U.S. Forest Service and the BLM with a plea to remove all Alabama National Forests parcels from the lease sale.

It was unclear as of June 8 when public meetings would be scheduled, or whether the BLM would re-schedule the lease sale.

“This is welcome news from the BLM and the Forest Service. It recognizes how concerned people are about the potential environmental harm from leasing and drilling on these public lands. It ensures the public will have an opportunity to be heard and that the agencies can fully study the impacts of these potential leases.”

On April 16, SELC submitted a formal “letter of protest” to the BLM on behalf of Wild South and the Natural Resources Defense Council (NRDC) saying the agency was improperly relying on an outdated environmental analysis performed by the Forest Service in 2004. Among other deficiencies, this stale analysis fails to assess the environmental impacts of drilling using high-volume hydraulic fracturing, known as “fracking.”

Prior to the letter, local citizens and elected officials were not aware of the proposed lease sale, and had no opportunity for public comment. The Talladega National Forest is a source of clean drinking water for numerous communities, including Anniston and Jacksonville, Ala. In 2009, the Forest Service estimated about 600,000 visits a year to the forest by hikers, hunters, anglers, horseback riders and others who seek out the forest’s exceptional recreational opportunities.

On May 31, SELC, on behalf of Wild South and NRDC filed a “notice of intent” to sue the two agencies under the Endangered Species Act, asserting the leasing and future drilling in the Talladega would likely harm numerous federally listed threatened and endangered species, including the Red Cockaded Woodpecker, the Indiana Bat and several fish and mussel species.