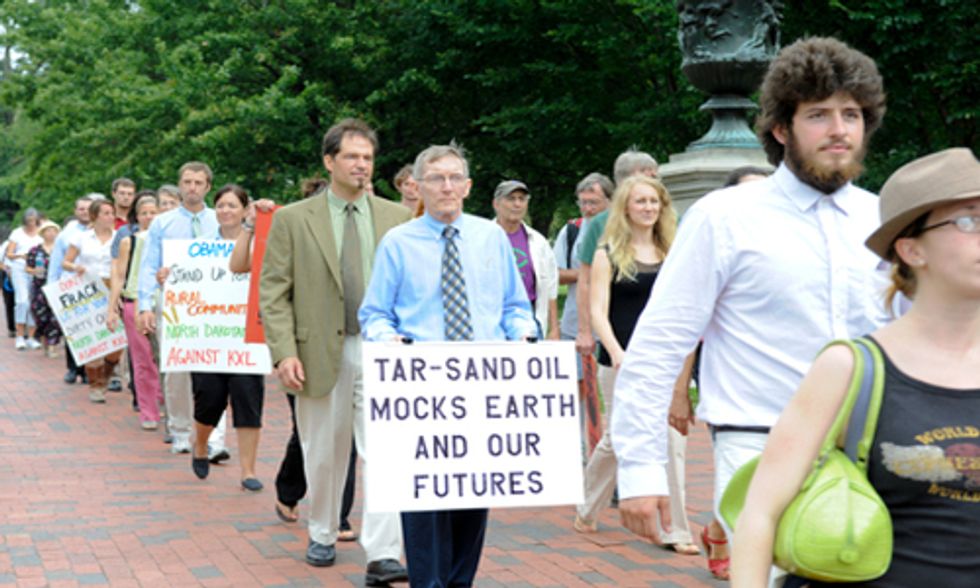 Once viewed by those in the fossil fuel industry as one of their brightest hopes for more big profits, tar sands extraction is looking riskier and costlier.

As Republicans in the U.S. continue to look for ways to ram through the Keystone XL pipeline after years of persistent and intensifying resistance from community and environmental groups, farmers and Native tribes, and TransCanada, the biggest company developing the Alberta tar sands, moves forward with a proposal for the even longer Energy East pipeline, there are signs that extracting oil from tar sands bitumen, one of the dirtiest forms of energy extraction, may be hitting some hard times.

And the protests may be a big part of the impact, along with plummeting oil prices, which are making both tar sands extraction and fracking less lucrative. Anti-tar sands actions have cost the industry $17 billion in revenue from 2010—about the time the anti-fracking campaign started—and 2013, according to a report published by the Institute for Energy Economics and Financial Analysis (IEEFA) and Oil Change International. It assesses for the first time how much the opposition has cost the industry—and what the carbon impact of that has been.

"The Keystone XL tar sands pipeline is one of the most talked-about North American energy and political issues of the era. Once thought inevitable, the project and Canada’s plan to expand tar sands production have been confronted by an accumulation of economic and political risks creating a veritable ‘carbon blockade,'" it says.

The report, Material Risks: How Public Accountability Is Slowing Tar Sands Development, revealed that tar sands exploration and extraction has lost almost $31 billion in that time period. It estimated that 55 percent of that was due to protests against tar sands development. Another $13.8 billion has been lost due to changes in the oil market.

“Industry officials never anticipated the level and intensity of public opposition to their massive build-out plans,” Oil Change International's executive director Steve Kretzmann told the London Guardian. “Legal and other challenges are raising new issues related to environmental protection, indigenous rights and the disruptive impact of new pipeline proposals. Business as usual for Big Oil—particularly in the tar sands—is over.”

It pointed out that lack of access to a market for its product "caused in large part by public accountability actions driven by pipeline campaigns," played an important part in the cancellation of three major tar sands projects so far in 2014, projects that would have released 2.8 billion tons of carbon into the atmosphere.

And, as Big Oil salivates over the possibility of a Republican-controlled Congress pushing President Obama to the wall to approve Keystone XL—possibly even with threats of impeachment if he does not give in to industry wishes—they're facing the unimpeachable reality of an oil glut and price drops, making investment in tar sands extraction still more unprofitable. The study said that nine of the ten leading Canadian tar sands producers underperformed the stock market in the last five years.

The report concludes, "It is expected that sometime during late 2014 or early 2015 the United States government will make a critical decision that could move the project forward or cause [Keystone XL's] cancellation or further delay. Whatever the decision, the storyline of unfettered growth attached to Keystoneand other tar sands projects has been permanently altered. Growing public sentiment to find alternatives to fossil fuels will drive much of the dialogue."

"This falling price—coupled with the growing grassroots mobilization against tar sands and—means that actually it’s the anti-oil movement who, for once have reason to be cheerful, no matter what happens in the midterm elections," wrote Oil Change International contributing editor Andy Rowell.