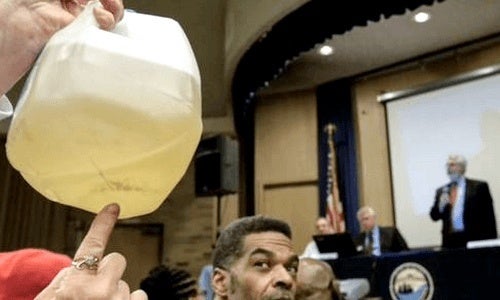 After a public health emergency was declared Tuesday due to the ongoing water crisis in Flint, Michigan, the state is now distributing free water filters and bottled water to the city’s residents, according to Reuters.

Recent tests from a local children’s hospital showed that children had elevated levels of lead in their blood a year after the city began using water from a local river instead of buying Lake Huron water through Detroit in order cut costs.

The tests “found the number of Flint kids under the age of 5 years old with above average lead levels nearly doubled city-wide and in some cases, tripled,” reported FOX 2’s Randy Wimbley.

“Our children are a top priority given the effects lead can have on their development,” Mayor Walling said in a statement. “Any bottled water donations we receive will be used for our children and other high risk groups, such as our seniors.”

It appears that the toxic metal had been entering drinking water through corroded pipes and plumbing materials, according to Flintwaterinfo.com.

Or, as Henry Henderson, the director of Natural Resources Defense Council’s (NRDC) Midwest office, explained in a blog post, “the water from the Flint River, as treated, is far more corrosive than the Lake Huron water that had previously coursed through the City’s pipes and water infrastructure.”

“As a result of the change to corrosive river water,” Henderson continued, “the aging lead pipes released higher concentrations of lead into Flint’s homes. Despite the urgently stated concerns raised by residents and presented to state and local officials, the people of Flint were told their water was safe.”

Based on state official’s action plan for #flintwater, we can’t let this crisis continue. http://t.co/th35Vp6g4Q pic.twitter.com/MHtH1HyzbX

Lead, which is most harmful to pregnant women, women who are nursing and children under age 6, can damage the brain and kidneys, and can interfere with the production of red blood cells. Lead poisoning can also irreversibly stunt a child’s mental and physical development.

The U.S. Environmental Protection Agency says that 15 parts per billion (ppb) is the maximum recommended level of lead in household water. However, an alarming Flint Water Study found that about 10 percent of their local water samples had values of lead at levels of 25 ppb.

Local parent Lee-Anne Walters told The Guardian she was “shocked, angry … and hysterical” after learning in March that her son’s immune system was compromised after unsafe lead exposure.

“I just couldn’t believe that we were paying to poison our kids,” she said.

To make matters worse, as The Guardian pointed out, Flint residents “pay some of the highest water rates in the U.S., in the community known for its economic decline.”

Officials had been insisting the water in Flint was safe and within federal guidelines. But they finally shifted positions this week after a public health emergency was declared by Genesee County Sheriff Robert Pickell.

The plan does not include restoring Detroit as a water source.

Chile to Create One of World’s Largest Marine Parks