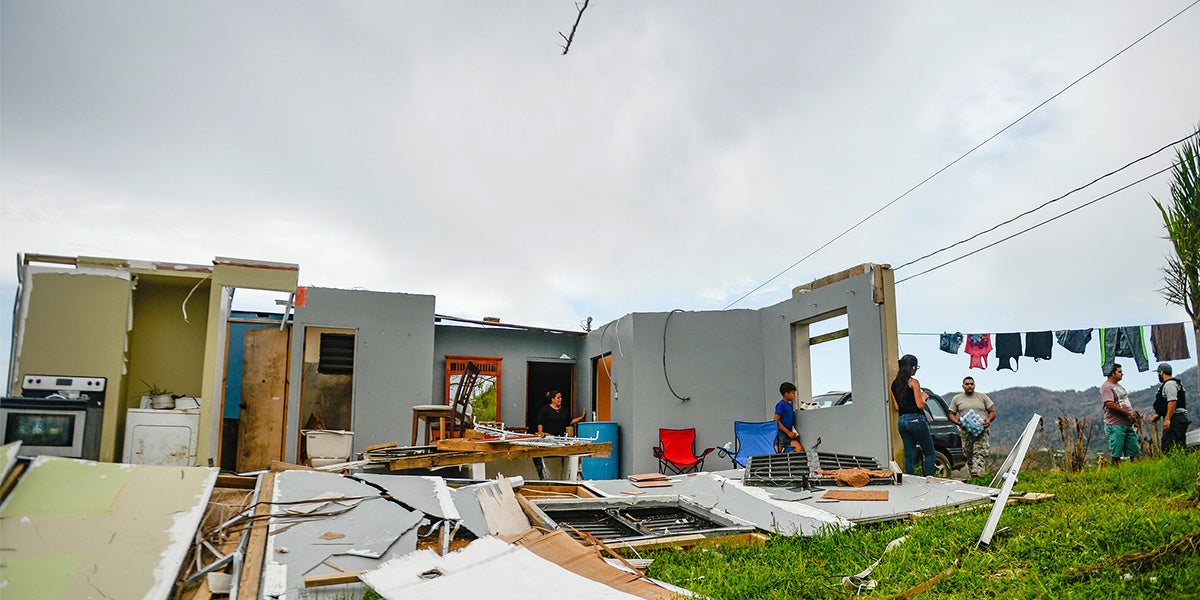 A family near Utuado, Puerto Rico received food and water at the only room they had left after Hurricane Maria destroyed their home. U.S. Department of Agriculture / Flickr

By Chelsey Kivland and Anne Sosin

Around the world, the health care debate often revolves around access.

Dr. Tedros Adhanom Ghebreyesus, head of the World Health Organization, recently announced, “All roads lead to universal health coverage.” Discussions for how to translate this vision into a road map for action is central to the agenda of the WHO’s executive board meeting this week in Geneva.

Yet focusing on access is not enough. The imperative for access must be paired with a frank acknowledgment that climate change is making communities around the world more vulnerable to ill health. A 2017 commission of The Lancet, a leading health research journal, tracked the effects of climate change on health and found evidence of harms “far worse than previously understood.”

Even as we move to close the access gap, a string of natural disasters in late 2017, including successive hurricanes and widespread forest fires, threaten to widen the vulnerability gap.

As a global health professional (Sosin) and a cultural anthropologist (Kivland), we have witnessed how the global exchange of health technology, expertise and aid has contributed to dramatic gains in the delivery of health care in Haiti and other settings, especially around infectious diseases. Yet climate change threatens to undermine the health gains in vulnerable communities across the globe.

As firsthand witnesses to sharp health disparities globally, we argue that world leaders need to insist that any health care strategy must address the social and environmental vulnerabilities driving poor health in the first place.

The Health Burden of Climate Change

Climate scientists argue that global warming is exacerbating extreme weather events. And natural disasters are often the source of health crises, particularly in fragile settings. Consider the case of Puerto Rico. The official death toll of the storm was estimated at 64; however, later reports have estimated that the disruption of health care services contributed to upwards of 1,052 deaths on the island.

Lagging recovery efforts have exposed how natural disasters deepen the relationship between socio-economic inequality and health disparity. In Puerto Rico, where poverty rates are double those of the poorest continental state, people already struggling with illnesses such as diabetes and kidney disease have seen their conditions worsen as the long-crumbling health care system is overwhelmed with patients and neglected by the mainland government.

The health impacts of the storms may persist even beyond the restoration of health services.

Hurricane Harvey exposed the toxic afterlife of disastrous storms. Storm damage to 40 industrial sites released chemical toxins linked to cellular damage, cancer and other long-term health problems. As The Lancet’s Commission on Pollution and Health found, air, water and soil pollution is now the leading environmental cause of death and disability, accounting for more than 9 million deaths annually. These numbers will only grow in the face of climate-induced disasters.

Restoring health care systems is vital for these communities, but it will merely treat the symptoms and not the causes of post-disaster illness. We believe that policymakers must address the link between environmental and health crises.

We have learned this lesson from our work in Haiti. Once a death sentence in rural Haiti, today HIV is largely controlled thanks to widespread access to antiretroviral therapy. The prevalence of the disease in pregnant women fell from 6 percent to just over 2 percent in the 10-year period from 1993 to 2003. Likewise, vaccines against cholera, introduced in 2015, have proven to be up to 90 percent effective against the disease.

However, even as vaccine coverage continues to grow, the population remains at risk for cholera and other emergent threats. Only 58 percent of the population has access to safe water and only 28 percent has access to basic sanitation. These conditions worsen in the wake of natural disasters. Hurricane Mathew in 2016 triggered spikes in cholera and other waterborne diseases, especially diarrhea, the second leading cause of death among children.

Hitting the one region of Haiti that had not yet been denuded of trees and vegetation, Hurricane Matthew seemed to complete the destruction of the country’s food systems.

Since the late 1980s, the erosion of waterways, loss of habitats and destruction of agricultural land have fueled the importation of cheap, processed foods. Rice and pasta have replaced a diet once rich in fruits, vegetables and whole grains. The high-sugar, low-nutrition foods contribute to the dual health burdens of obesity and under-nutrition.

These trends are ongoing, but they are exacerbated by the disastrous shocks of extreme weather events, which are made more likely by climate change. As Hurricane Matthew came ashore, it decimated fishing villages and tore through farming communities, killing livestock, uprooting crops and denuding backyard fruit trees. The United Nations estimated that 800,000 people suffered food shortages.

Haiti is often cast as behind the global curve. But as a reflection of the dangerous intersection of climate change, poverty and ill health, it is in fact predictive of what is to come in the rest of the world. Haiti teaches us that our own health is not bound up simply in the present decisions we make about health care systems but rather more broadly situated in the changing natural environment.

Closing the access gap has been a long battle and the gains cannot be underestimated. Yet the challenge ahead is even more daunting. Whereas increasing access has centered on extending health care technologies to underserved populations, closing the vulnerability gap will require approaches that extend beyond the health sector and national borders.

In the past year, the health care debate in the U.S. has centered on attempts to limit or expand access to care. Meanwhile, the Trump administration has left the Paris agreement and unraveled environmental protections for national and transnational corporations—with little resistance from health advocates. We believe that leaders must recognize that environmental policy is health policy. Rollbacks of environmental regulations will cause far greater consequences on health, in the U.S. and globally, than any health care bill.

Fixing health care systems while we undermine the environmental conditions for health are a textbook example of what Haitians describe as “lave men, swiyè atè”—washing your hands but drying them in the dirt.