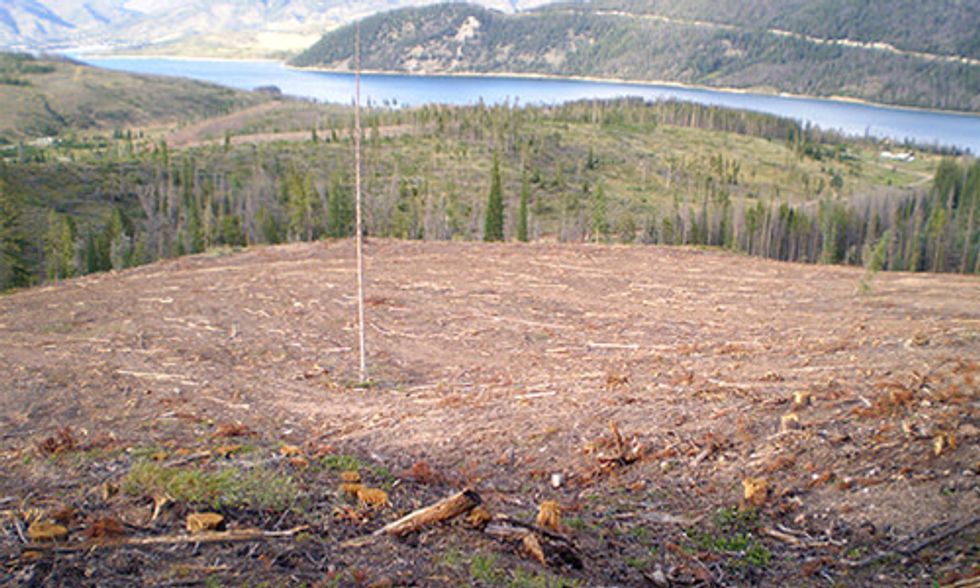 If we’re to believe the biomass energy industry, the U.S. Forest Service and a chorus of politicians from both sides of the aisle, we can solve the energy crisis, cure climate change and eradicate wildfire by logging and chipping our national forests and burning them up in biomass power facilities.

1,600 acres of White River National Forest are being clear-cut. All of the trees are fueling the Eagle Valley Clean Energy biomass facility. Photo credit: Josh Schlossberg

The plotline of their story goes something like this: Years of taxpayer-funded logging and fire suppression in federal forests (at the behest of the timber industry) has resulted in “overgrown” forests crawling with icky bugs, ticking time bombs ready to burst into flames. And the fix, it just so happens, involves even more taxpayer-funded logging and fire suppression, with the trees forked over to the biomass industry to burn in their incinerators and then the “green” electricity sold to utilities and eventually the public—at a premium.

This “burn the forest before it burns you” propaganda is most prevalent throughout the West, but it’s present anywhere there’s public land, with a total of 45.6 million acres across 94 national forests in 35 states qualifying as “Insect and Disease Area Designations” under the 2014 Farm Bill—money on the stump for the biomass industry.

Saving the Forest from Itself

The Forest Service’s logging-for-biomass agenda has “nothing to do with public welfare or the economy,” according to Carl Ross, executive director of Save America’s Forests, an organization that works to protect U.S. forests. Instead, it is simply a way to justify the existence of an agency whose “multi-billion dollar budget is dependent on cutting trees.” With the lumber industry in contraction due to a dismal housing market and tanked economy, the Forest Service focuses on “sick” forests that can only be “cured” through chainsaw surgery to fuel biomass incinerators.

The concept of logging a forest to “save” it is nothing new. It dates back to President George W. Bush’s Healthy Forest Restoration Act in 2003. However, a recent uptick in national forest logging has accompanied a rash of new biomass incinerator proposals, with politicians and even some environmental groups like the Nature Conservancy, cheering the industry on.

Currently, the majority—though not all—of the trees fueling the hundreds of biomass power plants across the country come from private land. However, as you read this, Colorado’s White River National Forest is being clearcut to feed the Eagle Valley Clean Energy biomass incinerator in Gypsum and plans are being hatched to hand national forests over to the biomass industry in Washington, California, Arizona, New Mexico, Montana, Minnesota and Virginia.

Fanning the Flames of Fire Hysteria

As any Madison Avenue advertiser knows, the best way to sell a product is to make people afraid not to buy it: If you don’t wear these sneakers you won’t make the team. If you don’t use this shampoo you’ll never get the girl. If your tax dollars don’t fund the logging of public forests, your house will burn down. Inflaming anxieties around wildfire is one of the preferred tools of biomass supporters.

What the industry leaves out, however, is that “fuels reduction” or “wildfire prevention” logging, like any form of logging, degrades forests by compacting soil with heavy equipment and miles upon miles of logging roads, silts watersheds with eroding soils, and kills fish and wildlife. Industry and agency claims that “fuels reduction” plays the same function as wildfire ignore fire’s ecological role of refreshing forest stands, creating wildlife habitat, and returning carbon and nutrients back into the soil. What’s more, logging for biomass can be even more intensive than logging for lumber since it typically removes the high nutrient tops and branches which would otherwise be left in the forest to slowly decompose.

Luckily, science is catching up to common sense by demonstrating that wildfires, including large, “catastrophic” ones, were historically quite common; that large fires are more a product of drought, high temperatures and winds than “fuel” levels; and that the “effectiveness” of logging for wildfire is “not supported by a significant consensus of scientific research,” with the practice unlikely to slow fires, but instead running the risk of spreading them quicker by drying the forest and opening it to wind.

Humoring industry for a moment, even if logging could stop large wildfires and it was desirable to do so, the chance that a particular logged acreage will experience fire in the coming decades is pretty improbable. Cutting a given stand in a national forest on the off-chance that it might burn is like cutting off your thumb so you don’t hit it with a hammer.

Biomass supporters also claim that the mountain pine beetle increases the risk of wildfire, giving us yet another reason to log forests. It’s true that beetles might give some of us the willies, but insects have a crucial job in the forest, killing some trees to open up space for fresh growth. And while it’s true that two to three years after a visit from the mountain pine beetle a tree’s dying needles can make it more flammable, following that brief window, a tree is actually less apt to burn than when it was green and less prone to experience a crown fire.

Naturally, this hasn’t stopped industry from advocating for unscientific “preventative” treatment that involves logging before the beetle even shows up, or afterwards if it does, despite the lack of proof that doing so accomplishes anything. “Most research indicates that there is little or no such relationship between beetle-caused tree mortality and subsequent fire occurrence and severity in lodgepole pine forests,” concludes professor Bill Romme, who teaches forest and fire ecology at Colorado State University, in an article written for NASA’s Earth Observatory. Instead, fire is “controlled primarily by weather conditions” and the amount of fuels, including from beetle kill, is only a “minor influence on fire behavior.”

More research, such as “Effects of Bark Beetle-Caused Tree Mortality on Wildfire,” a report out of Utah State University, demonstrates that “generalizations about the effects of beetle-caused tree mortality on fire characteristics are unwarranted,” while concerns about soil scorching—a favorite boogeyman of the Forest Service—are also overinflated.

Biomass Doesn’t Live Up to Hype

Despite being touted as a “green” energy source by some, biomass energy typically falls short of its many promises.

Enthusiasts argue that biomass provides a valuable, low-carbon source of renewable energy. Trees and food crops grow back, they say, providing a never-ending stockpile of biomass material. Biomass has gotten a lot of attention because it can usually be accessed whenever needed, a benefit not shared with weather-dependent resources like solar and wind. What is more, advocates claim whatever comes out of the smokestack is harmless.

Unfortunately, particularly when it comes to using trees for fuel, most of these arguments just don’t pan out. Burning carbon-storing forests in an incinerator typically emits higher levels of climate-changing greenhouse gases per unit of energy than a dirty coal-fired plant. Not to mention that when you cut down a tree, you take away its future carbon storing potential. Biomass incinerators also produce harmful air pollution (including asthma-inducing particulate matter and carcinogenic Volatile Organic Compounds). And though biomass energy may be available around-the-clock, it simply isn’t a cost-effective source of energy—it is expensive to produce!

Those who want to see what “forest health treatments” feeding biomass incinerators actually look like need go no further than the Ophir Mountain Forest Health and Fuels Reduction Project in Colorado’s White River National Forest. There, 1,600 acres are being clear-cut just outside of Frisco in response to the local mountain pine beetle “epidemic,” which peaked between 2007 and 2009 and has since subsided. All of the trees are fueling the Eagle Valley Clean Energy biomass facility.

West Range Reclamation won a bid to pay $8.6 million to log the White River for 10 years, with much of the wood being sold to the Eagle Valley biomass incinerator. Eagle Valley itself has received $40 million in loan guarantees from the Rural Utilities Service, a portion of an annual $12.5 million matching payment for feedstock transportation from the Biomass Crop Assistance Program (part of the Farm Bill), and a $250,000 biomass utilization grant.

So where will Eagle Valley source its wood after the beetle-killed trees run out? Conveniently, the White River National Forest is proposing new “forest health” projects all the time, such as the recently announced Keystone Vegetation Management clearcutting project, with long-term plans to log 220,000 acres of the White River in total. And after those forests are gone, the Bioenergy Alliance Network of the Rockies wants to harness millions of more acres of national forests across all of Colorado and the rest of the Rocky Mountains.

Backcountry logging won’t get us anywhere. It doesn’t protect people from wildfires, though it does divert funding and attention from strategies that actually can, like making homes “firewise” (as demonstrated by the Forest Service’s own research), and it doesn’t provide a clean, economical, or sustainable source of energy. Ultimately, allowing the biomass industry to decimate our national forests just isn’t worth the impacts to clean water, fish and wildlife, flooding and erosion control, and recreation.

Josh Schlossberg of Boulder, Colorado is editor of The Biomass Monitor, the nation’s leading publication tracking the health and environmental impacts of biomass energy.