EPA Chief Pruitt Even Violates His Own Principles 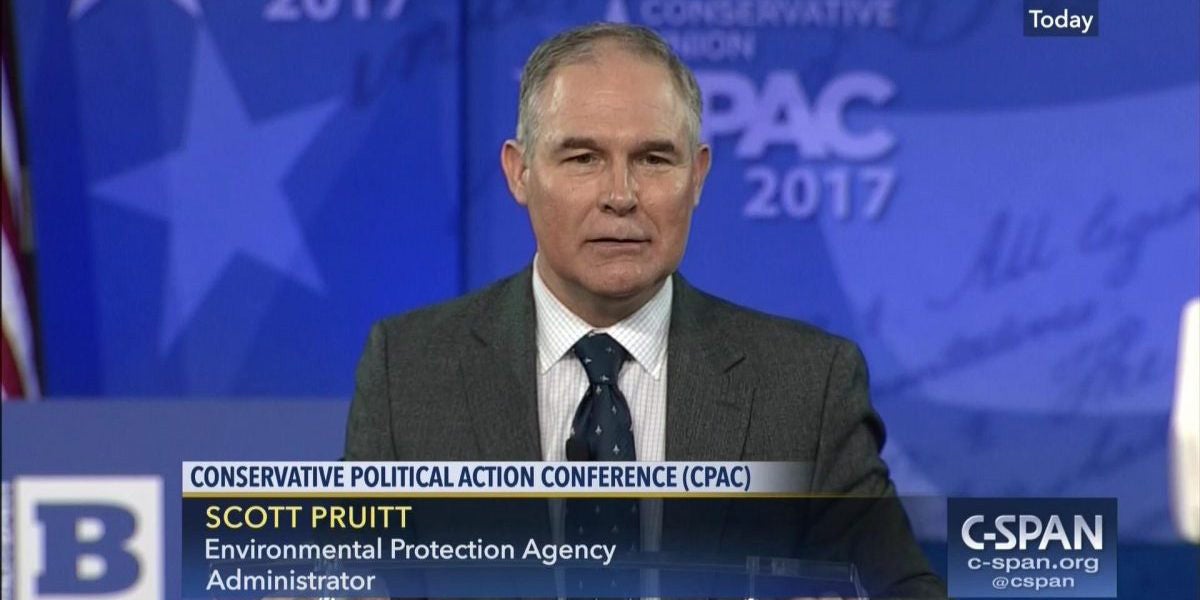 With U.S. Environmental Protection Agency (EPA) Administrator Scott Pruitt’s job now hanging in the balance, it is a good time to recall that, just after his Senate confirmation, he gave a speech at the Conservative Political Action Conference (CPAC) that emphasized the three principles he said would stand at “the heart of how we do business at the EPA”: process, rule of law, and federalism.

A little more than a year into his tenure, he has violated all of them.

In fact, as we now know, Pruitt has a long track record—going back to his days in Oklahoma—of flouting official procedures when it suits him.

Most troubling is Pruitt’s disdain for EPA policy procedures, which have a considerable impact on public health. Just this week, Pruitt undercut the EPA’s long-established process for drafting strong, protective regulations by proposing that the agency no longer accept studies if all of their data isn’t publicly available. That would mean the agency would have to ignore most epidemiological studies, which rely on private medical information that cannot and should not be shared.

Polluter-funded members of Congress have tried to pass bills instituting this restriction for years, despite the fact that it would violate the EPA’s obligation to use the best available science to protect public health. Sure enough, emails obtained by the Union of Concerned Scientists show that political appointees, not career staff or scientists, were behind the proposal, and they only considered its potential impact on industry. In response, nearly 1,000 scientists sent a letter to Pruitt asking him to back off.

Pruitt also packed the EPA’s Science Advisory Board (SAB) with industry scientists, overturning four decades of precedent by banning scientists who have received EPA grants from serving on the SAB or any other agency advisory panel. Why? Pruitt claims they have a conflict of interest. Pruitt did not renew terms for a number of respected members and dismissed several independent scientists before their terms were up, shrinking the SAB from 47 to 42 participants and more than doubling the number of its polluter-friendly members.

Likewise, Pruitt has little use for standard EPA administrative procedures. The Government Accountability Office, for example, recently found that he violated federal law by ordering a $43,000 soundproof phone booth. Political appointees, it turns out, have to clear office improvement purchases over $5,000 with Congress. Unlike his predecessors, he has routinely flown first class, and so far it has cost taxpayers more than $150,000. He tripled the size of the administrator’s security team to 19 agents, and according to CNN their annual salaries alone cost at least $2 million. He has a 24-hour-a-day bodyguard. He rented a condo for $50 a night—well below market value—from the wife of an energy lobbyist who met with Pruitt last July and lobbies EPA on behalf of his clients. The list of Pruitt’s ethical infractions goes on and on.

Breaking the Rule of Law

It’s hard to argue with that. Of course industrial facility owners should be clear about their responsibility to curb emissions. Under Pruitt, however, polluters can be certain about at least one thing: There’s a good chance they won’t be prosecuted. For Pruitt, the rule of law is made to be broken.

In its first year in office, the Trump administration resolved only 48 environmental civil cases, about a third fewer than under President Barack Obama’s first EPA director and less than half under President George W. Bush’s over the same time period, according to a February report by the Environmental Integrity Project. The Trump administration recovered just $30 million in penalties from these cases, nearly 60 percent less than the $71 million the Obama administration recovered in its first year.

A December analysis by The New York Times comparing the first nine months of the Trump regime with previous administrations also found a marked decline in enforcement. It determined that the EPA under Pruitt initiated about 1,900 enforcement cases, about a third fewer than during the Obama administration and about a quarter fewer than the Bush administration over the same time frame.

Meanwhile, Pruitt—who sued the EPA 14 times to block stronger air, water and climate safeguards during his tenure as Oklahoma attorney general—is now trying to roll back environmental protections from the inside. Since taking office, he has moved quickly to delay or weaken a range of Obama-era regulations, including ones that protect the public from toxic pesticides, lead paint and vehicle emissions.

Ironically, Pruitt’s cavalier attitude about following procedures has thus far blunted his wrecking-ball campaign. “In their rush to get things done, they’re failing to dot their ‘I’s and cross their ‘T’s, and they’re starting to stumble over a lot of trip wires,” Richard Lazarus, a Harvard environmental law professor, told The New York Times. “They’re producing a lot of short, poorly crafted rulemakings that are not likely to hold up in court.”

Federalism for all but California

“So process matters, rule of law matters, but let me tell you this: What really matters is federalism,” Pruitt told the CPAC faithful. “We are going to once again pay attention to the states across the country. I believe people in Oklahoma, in Texas, in Indiana, in Ohio, and New York and California, and in all the states across the country, they care about the air they breathe, and they care about the water they drink, and we are going to be partners with these individuals [sic], not adversaries.”

California? He must have forgotten that when he lashed out at the state for embracing stronger vehicle fuel economy standards than what he and the auto industry would prefer. “California is not the arbiter of these issues,” Pruitt said in an interview with Bloomberg TV in mid-March. California sets state limits on carbon emissions, he said, but “that shouldn’t and can’t dictate to the rest of the country what these levels are going to be.”

California, which has a waiver under the 1970 Clean Air Act giving it the right to set its own vehicle emissions standards, reached an agreement with the Obama administration and the auto industry that established the first limits on tailpipe carbon emissions. The next phase of the standards calls for improving the average fuel efficiency of new cars and light trucks to about 50 miles per gallon by 2025 in lab tests, corresponding to a real-world performance of about 36 mpg. By 2030, that would reduce global warming pollution by nearly 4 billion tons, akin to shutting down 140 coal-fired power plants over that time frame.

California wants to stick with the standards. Pruitt, echoing the specious claims of auto industry trade groups, announced in early April that he wants to roll them back. Putting aside the fact that the auto industry’s own analysis concluded that carmakers can meet the 2025 targets primarily with conventional vehicles, what happened to Pruitt’s “cooperative federalism” ideal, especially since California is not acting alone?

Thirteen states, mostly in the Northeast and Northwest, and the District of Columbia have adopted California’s stricter emissions standards. Together they represent at least a third of the U.S. auto market. And in response to Pruitt’s roll-back announcement, 12 state attorneys general and 63 mayors from 26 states released a declaration supporting the stronger standards. “Such standards are particularly appropriate given the serious public impacts of air pollution in our cities and states and the severe impacts of climate change…,” the declaration reads. “If the administration attempts to deny states and cities the basic right to protect their citizens, we will strongly challenge such an effort in court.”

That declaration sounds a lot like what Pruitt endorsed at the conclusion of his CPAC speech, but of course he was referring to state efforts to weaken federal environmental safeguards, not strengthen them. “We are going to restore power back to the people,” he said. “We are going to recognize the regulatory uncertainty and the regulatory state needs to be reined in, we’re going to make sure the states are recognized for the authority they have, and we are going to do the work that’s important to advance freedom and liberty for the future. It’s an exciting time.

The CPAC crowd gave him a standing ovation, but the reception he’s now getting from both Democrats and Republicans alike is considerably cooler. At this point, Mr. Pruitt may soon find himself out of a job.