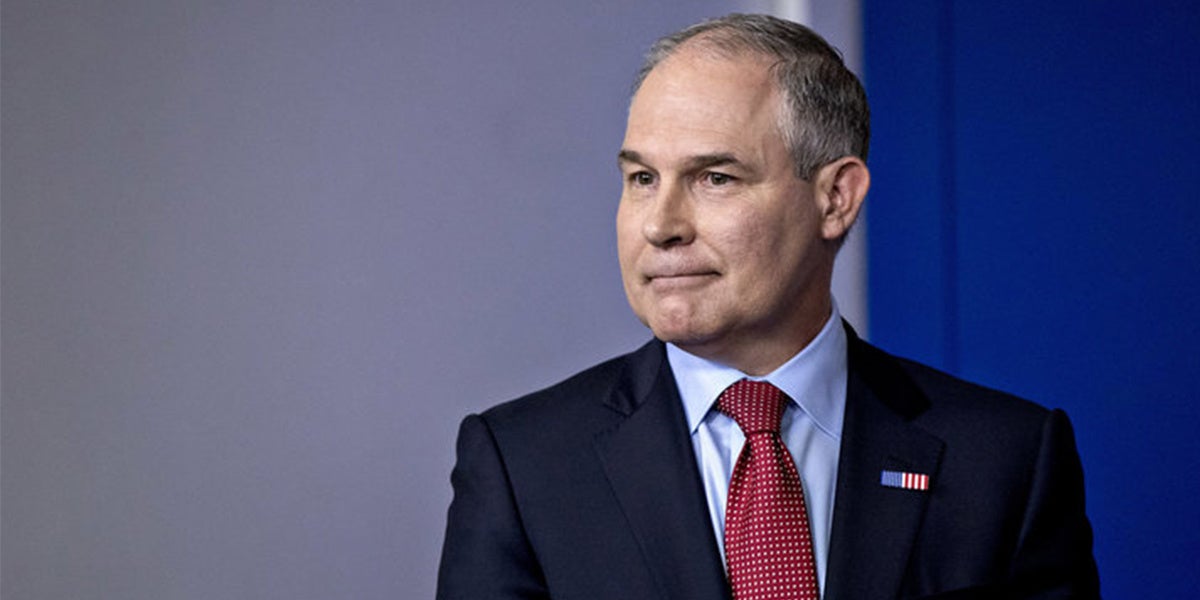 A federal judge ruled Monday that
Scott Pruitt, the administrator of the U.S. Environmental Protection Agency (EPA), broke the law for failing to implement his agency’s ozone pollution rule.

Judge Haywood Gilliam of the U.S. District Court for the Northern District of California said Pruitt violated the
Clean Air Act for failing to announce by Oct. 1, 2017 which areas in the country have unhealthy levels of smog, a rule set by the 2015 ozone standard.

According to
The Hill, Pruitt only announced findings for areas that complied with the Obama-era rule, but not for areas out of compliance. The EPA boss initially tried to stall the Oct. 1 deadline by a year but reversed course.

“There is no dispute as to liability: Defendants admit that the administrator violated his nondiscretionary duty under the Clean Air Act to promulgate by October 1, 2017, initial area air quality designations,” Gilliam wrote, citing a Justice Department court filing in January that acknowledged the EPA failed to meet the deadline.

Gilliam ordered the EPA to finish the process for the entire country by April 30, with the exemption of areas in San Antonio, Texas, which the agency must comply with shortly thereafter.

In 2015, the Obama administration strengthened standards for ground-level ozone to 70 parts per billion based on extensive scientific evidence about the effect of smog on public
health and welfare. Smog can exacerbate asthma attacks for children and vulnerable populations.

“The U.S. Environmental Protection Agency admitted in this case that it failed to do its job and meet its deadline under the Clean Air Act,” he said. “The stakes are high. The smog-reducing requirements at issue will save hundreds of lives and prevent 230,000 asthma attacks among children. That’s worth fighting for.”

New York Attorney General Schneiderman, one of the AGs who sued the administration, added: “We’ll keep a close eye on the EPA’s compliance with today’s order, and our coalition stands ready to act to protect our residents and our states from Washington’s toxic policies.”

“Everyone deserves to breathe clean air. And because of the Clean Air Act, we’re legally entitled to it. The court got it right when it ordered the EPA to finish making ozone designations sooner than the agency requested,” said attorney Seth Johnson, who represented
Earthjustice, which filed the lawsuit on behalf of the groups. “Cleaning up ozone air pollution is especially important for kids, seniors, and people with asthma. Many of our largest metropolitan areas have unhealthy smog levels. These include New York, Los Angeles, Chicago, Dallas, Houston, Cleveland, Denver, Philadelphia, Phoenix, and San Antonio. The court’s decision will help save hundreds of lives by getting the cleanup process going.”

Mary Anne Hitt, the director of Sierra Club’s Beyond Coal campaign, had a similar sentiment. “This is a victory for everyone who breathes, and is clear evidence that Scott Pruitt’s frequent attempts to delay and obstruct federal clean air safeguards is against the law. The severity of Pruitt’s attempts [is] a matter of life and death. Delaying the implementation of these life saving smog standards puts the health of thousands of kids at risk.”

EPA spokeswoman Liz Bowman told
Reuters, “We look forward to working with co-regulators to continue the designations process for the 2015 standards for ground-level ozone; we are evaluating the information provided by governors in February 2018 as part of that process.”