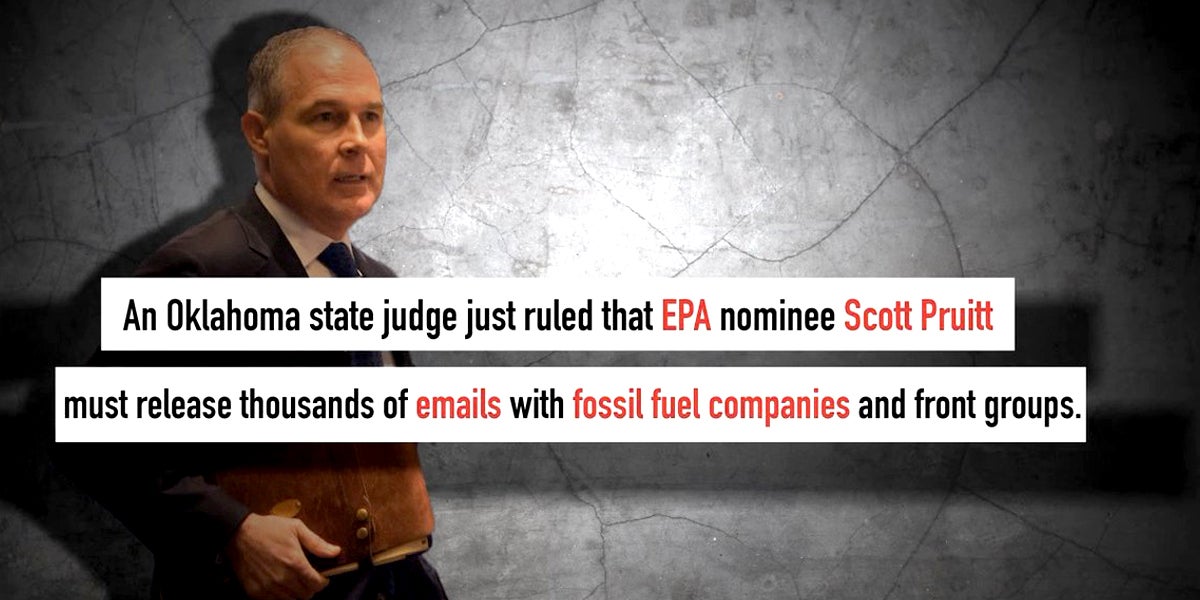 The Oklahoma County Court on Thursday found Trump‘s U.S. Environmental Protection Agency (EPA) nominee Scott Pruitt in violation of the state’s Open Records Act. The Center for Media and Democracy (CMD) filed a lawsuit against Pruitt for improperly withholding public records and the court ordered his office to release thousands of emails in a matter of days.

In her ruling, Judge Aletia Haynes Timmons slammed the Attorney General’s office for its “abject failure” to abide by the Oklahoma Open Records Act.

The judge gave Pruitt’s office until Tuesday, Feb. 21, to turn over more than 2,500 emails it withheld from CMD’s January 2015 records request and just 10 days to turn over an undetermined number of documents responsive to CMD’s five additional open records requests outstanding between November 2015 and August 2016.

https://twitter.com/brianschatz/status/832349706760122369 pending Open Records Act requests may be the only means by which the Senate and the general public can obtain in a timely manner critical information about Mr. Pruitt’s ability to lead the EPA.”

“We need to understand whether … Mr. Pruitt engaged with the industries that he will be responsible for regulating if he is confirmed as administrator in ways that would compromise his ability to carry out his duties with the complete impartiality required.”

At his hearing before the Senate Environment and Public Works (EPW) Committee, Pruitt faced a series of questions about his private meetings with major fossil fuel companies while chair of the Republican Attorneys General Association and fundraising for the Rule of Law Defense Fund. Sen. Sheldon Whitehouse concluded his questioning telling Pruitt his testimony “just doesn’t add up.” Despite failing to respond to any records requests for the past two years, Pruitt told U.S. Senators last week to file more open records requests with his office to answer 19 outstanding questions from his confirmation hearing.

After Democratic Senators twice boycotted the EPW Committee vote due to concerns over Pruitt’s conflicts of interests and failure to fulfill open records requests, Republicans resorted to suspending Committee rules to advance his nomination.