The Man Who Sued the EPA Is Now Running It 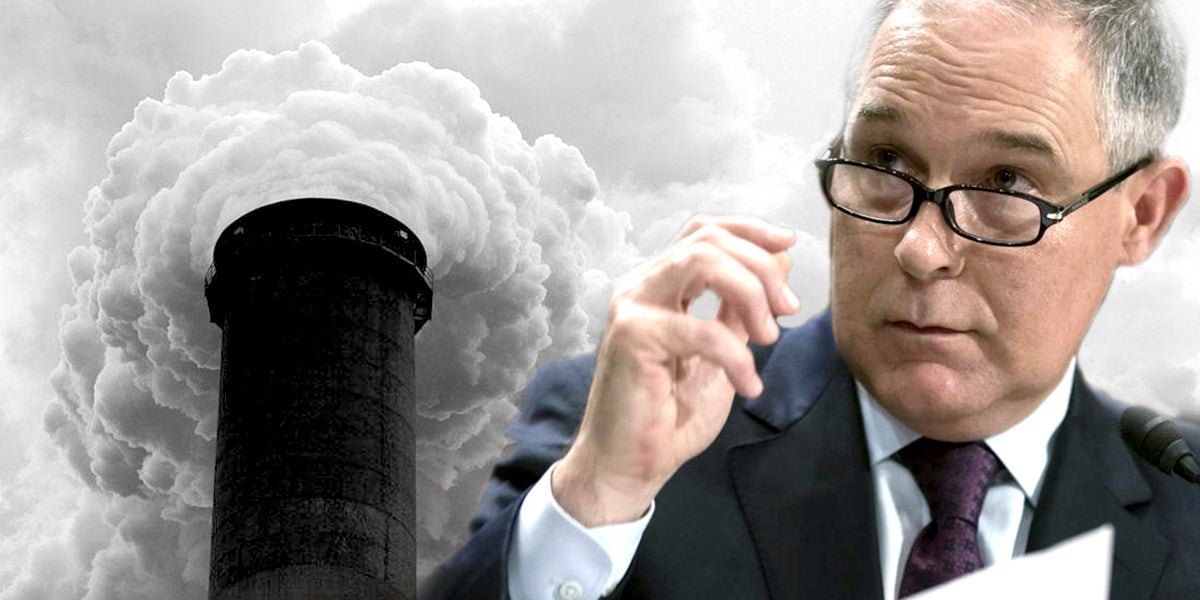 Voting largely along party lines, Congress just confirmed Scott Pruitt as administrator of the U.S. Environmental Protection Agency (EPA)—an attorney who has spent his professional career suing the EPA to stop the agency from performing its fundamental mission of ensuring clean air and water for all Americans. This confirmation marks a sharp break with precedent; most EPA administrators from both parties have come to the office with a demonstrated commitment to the EPA’s mission.

One might even say that this vote signals the end of an era of bipartisan congressional support for a strong federal role in protecting our environment, as this newly confirmed administrator is likely to dismantle the safeguards that both parties have supported since the 1970s.

What that means for all of us who care about clean air and water and the protection of our environment is this: It is up to us to monitor carefully what happens next and to be prepared to spring into action as needed.

Here are some of the key developments I’m watching for:

Will Scott Pruitt Recuse Himself?

As repeatedly noted in his nomination hearing, Pruitt has represented the State of Oklahoma in numerous lawsuits against EPA. Many of these cases are still active today, directed at major EPA regulations, including the Clean Power Plan (which limits carbon emissions from power plants); national air quality standards; mercury emissions from coal plants; methane limits for the oil and natural gas excavation; and a Clean Water Act rule that clarifies federal jurisdiction over bodies of water.

During the nomination hearing, Pruitt did not commit to recusing himself from these cases, but he did say he would rely on advice from the EPA ethics counsel. Common sense tells us that he cannot possibly be impartial on these issues and conflicts of interest abound. For example, the state attorneys general who joined him in the suit against the Clean Power Plan have written a letter to the Trump administration, asking the president to issue an executive order declaring that the rule is unlawful. Responding to this request would, in the normal course of business, require EPA input, since it is an EPA regulation. How can Scott Pruitt possibly participate in any review of that request given that, just a few weeks ago, he himself was one of the attorneys general making this claim?

He must recuse himself, as 30 senators have made clear in a recent letter.

As a candidate, Trump pledged to dismantle the EPA. He lacks a filibuster-proof majority to change the laws that created the EPA, such as the Clean Air and Clean Water Act. But he could cripple the EPA with budget cuts, which are much harder for a minority to stop.

By wide margins, most Americans favor enforcement of laws that protect our air and water. Cutting EPA enforcement will therefore be unpopular—but Scott Pruitt is likely to argue that we can rely on states to enforce environmental laws, so cutting the EPA’s budget won’t do any real harm.

This is a dangerous myth.

Having served as a state environmental commissioner, I know from personal experience that state environmental agencies are already strapped. They typically lack the technical experts employed at the EPA and stand in no position to take on additional enforcement responsibilities shed by the EPA.

In Massachusetts where I served, for example, my former agency’s staff was cut nearly in half between 2002 and 2012 due to budget cuts, even as the agency’s responsibilities grew. That occurred in a state well known for its strong commitment to environmental protection. As a result, my agency was forced to cut back on important and effective programs, such as water sampling to locate sources of bacteria that pollute rivers. If the EPA’s budget is cut, it will mean even fewer resources for states, because states now receive a significant share of the EPA’s budget to cover enforcement activities.

Second, state environmental agencies sometimes experience political pressure against enforcement that might harm a large employer or impose significant costs on residents. We saw some of this in play in Flint, Michigan, where a state agency did not enforce a law requiring corrosion treatment of pipes to reduce lead contamination; it took an EPA staffer and outside scientists, as well as the residents themselves, to blow the whistle on lax state enforcement.

Third, states are not equipped to deal with the widespread problem of interstate pollution. To cite one of the most egregious examples, the state of Maryland could shut down virtually all in-state sources of air pollution and yet still not be in compliance with health-based air quality standards due to pollution from neighboring “upwind” states. A strong federal law enforcement presence is needed to address the simple fact that air and water pollutants do not honor state boundary lines.

We and others stand prepared to fight crippling budget cuts at the EPA and explain that the protection of our air and water requires both federal and state environmental law enforcement.

Scott Pruitt Will Likely Gut the Clean Power Plan; What Will He Replace It With?

During the campaign, President Trump called for abolishing the Clean Power Plan, the EPA regulations that limit carbon emissions from power plants. And as noted, Administrator Pruitt sued to block it. It now seems nearly inevitable that he will move to drastically undermine the plan.

The question is, what will he propose to replace it? The EPA does not have the option of doing nothing. The U.S. Supreme Court ruled in 2007 that the EPA has a duty to regulate greenhouse gases under the Clean Air Act if it makes a determination that such gases endanger public health and the environment. In 2009, EPA made such a finding (which Pruitt fought, though unsuccessfully).

Thus, EPA remains obligated to regulate carbon dioxide emissions in general and in particular with respect to power plants, which are among the nation’s largest source of these emissions.

One predictable approach would be a revised regulation that reduces emissions, but by a much smaller percentage. The current litigation over the Clean Power Plan could serve as a roadmap for a diminished rule. The Clean Power Plan relies on three strategies to reduce emissions—improving efficiency of coal plants, switching from coal to gas and switching to renewables. During the litigation, Scott Pruitt conceded that the EPA had the authority to require improvements to coal plant efficiency, but claimed that the other two strategies, which go “beyond the fenceline” of an individual source, were unlawful.

Thus, one might expect that a revised rule will mirror what Pruitt called for in court. If so, rather than cutting carbon emissions by approximately 32 percent by 2030, the rule would result in barely noticeable emission reductions.

If this happens, litigation will be necessary. The court that mandated the EPA to address greenhouse gas emissions should not be satisfied with a rule that does little to cut one of the nation’s largest sources of CO2 emissions.

The second biggest carbon cutting program of the Obama administration is the Union of Concerned Scientists-backed fuel economy standards for cars which, it is estimated, will roughly double fuel economy between 2012 and 2025. Those standards were agreed to by the automakers at the time. They are projected to cut billions of tons of CO2, reduce oil use by billions of barrels and save consumers an average of $8000 over the lifetime of a vehicle.

When the standards were put in place, they included a “mid-term review” provision in which the EPA would assess whether changes in technology, costs or factors might warrant a change to the standards. The review was to be completed by April 2018, but the Obama administration in its closing days completed the review and determined, based on a thorough review, that there was no reason to change the standards, since automakers are ahead of schedule in meeting these standards and at a lower cost than originally predicted.

Some automakers are calling for this determination to be re-opened, presumably so that the rules can be modified and perhaps weakened. And one can justifiably be anxious that they could offer something that the Trump administration is keen to secure—a commitment to increased manufacturing in the U.S.—in exchange for relaxing these standards.

It would be a disaster for these historic standards to be rolled back and we’ll fight any such rollback along with many allies.

As I wrote recently, Pruitt’s record shows little evidence of deference to scientists. After all, he sued the EPA for relying upon the world’s most prominent climate scientists, including many employed by the federal government, in finding that greenhouse gases endangered the environment. And he claimed that the question of climate change and the role of human causes of it are still an open question for debate.

As EPA administrator, he will hear from EPA scientists whose expert judgment will not align with his deregulatory agenda in some cases. Will these scientists’ findings be suppressed or disregarded?

Scott Pruitt comes to his new position with the heavy baggage of having devoted a good part of his career to opposing EPA, not to mention the apparent antipathy of his boss towards the agency. The Trump transition team, composed of career ideologues, further fueled anxiety over the EPA’s fate, with threats of gag orders on agency scientists, deletion of climate data from the website and draconian budget cuts. This is why we see, for example, hundreds of career civil servants risking their jobs by publicly protesting Pruitt’s confirmation.

Scott Pruitt has a chance now to push the reset button and position himself as an open-minded and principled conservative, rather than a deregulatory ideologue. Most helpful to him will be to invest significant time in hearing from the agency’s talented scientists, engineers, policy analysts and attorneys.

No matter what, we will be watching his actions vigilantly and stand prepared to fight to retain key protections of Americans’ health and safety at the agency he now oversees.

Ken Kimmell is president of the Union of Concerned Scientists and has more than 30 years of experience in government, environmental policy and advocacy.