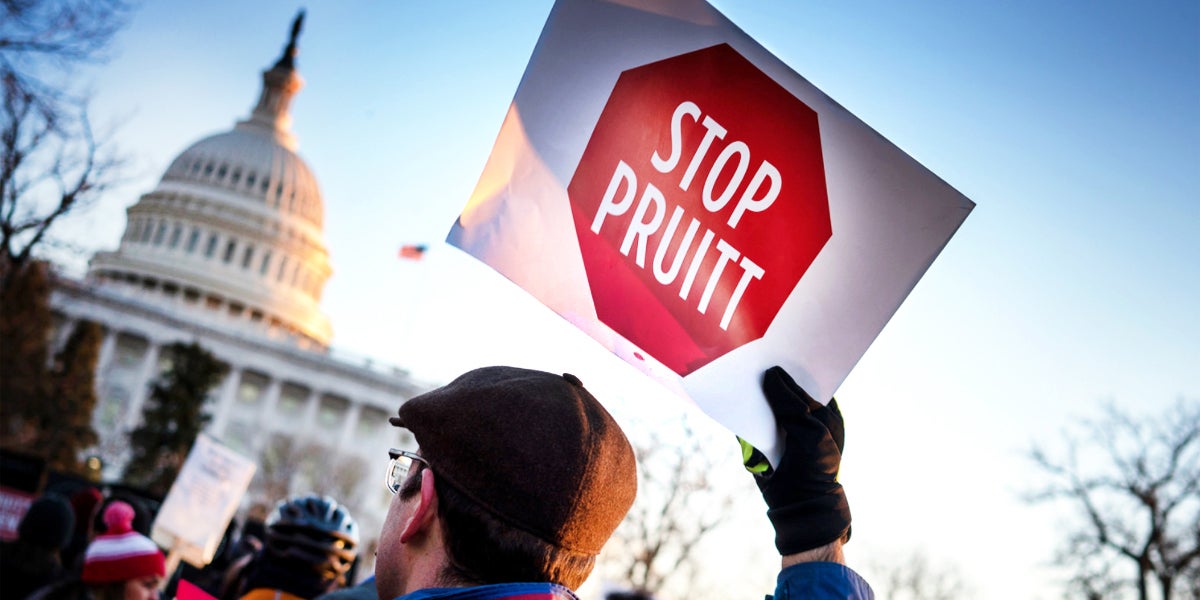 By Liz Perera and Adam Beitman

Scott Pruitt shocked the world last week when he declared that carbon pollution was not the primary driver of the climate crisis. But what was even more shocking was the fact that he clearly and repeatedly misled Congress about his intentions on this critical issue during his confirmation process to serve as the administrator of the U.S. Environmental Protection Agency (EPA).

Pruitt’s misleading testimony before the Senate is actually part of a much larger pattern of him misleading Congress.

Pruitt is a baseball fan so let’s put it this way: three strikes and you’re out. He has proven that he is unfit to do the job he is legally required to do—and unwilling to do it even if he could—meaning he ought to resign. Failing that, the Senate should take action to remove him from his position because, among the most obvious and readily identifiable instances, Pruitt misled Congress at least three times:

Pruitt Misled Congress About His Emails:

In written testimony to Congress in response to a question from Sen. Cory Booker, Pruitt declared that “I use only my official OAG [Office of the Oklahoma Attorney General] email address and government issued phone to conduct official business.”

The Associated Press (AP) revealed that claim to be false when select Pruitt correspondence was ordered released to the public by a court after public interest groups had requested it.

According to AP, multiple instances of such private electronic communication for purposes of conducting public business have been uncovered, “including a 2013 exchange with a petroleum industry lobbyist who emailed Pruitt and a lawyer on the attorney general’s staff.”

Strike One: Pruitt misled Congress about his use a private email account to conduct official state business.

Last week, Pruitt told CNBC that he does not believe carbon dioxide is a “primary contributor” to the climate crisis.

But that’s a very different tune from what he sang to Congress. In written testimony, Pruitt certified that “I also believe the administrator has an important role when it comes to the regulation of carbon dioxide, which I will fulfill consistent with Massachusetts v. EPA and the agency’s Endangerment Finding on Greenhouse Gases respective of the applicable statutory framework established by Congress.”

Separately, in an exchange with Sen. Bernie Sanders, Pruitt said “Senator, I believe that the [EPA] administrator has a very important role to perform in regulating CO2.”

By offering and affirming that the EPA administrator has an important role in regulating carbon dioxide in light of the EPA’s Endangerment Finding (established in the Massachusetts vs. EPA Supreme Court case), Pruitt clearly acknowledged the role carbon pollution plays in driving climate change.

During separate questioning Pruitt also explicitly acknowledged the legitimacy of the endangerment finding, saying: “the endangerment finding is there and needs to be enforced and respected.” When pressed by Sen. Markey on whether he would review or alter the finding if confirmed, Pruitt affirmed “There is nothing that I know that would cause a review at this point.”

Pruitt clearly made the case to the Senate at the time that he had no reason to reverse the finding that carbon pollution poses a danger by causing climate change, whereas now he says publicly that it does not pose a danger, actively denying the role of carbon pollution as a dangerous climate pollutant.

Strike Two: Pruitt misled Congress about his views on climate change and, more importantly, how carbon pollution should be regulated by the EPA as an air pollutant in light of Supreme Court rulings and the agency’s “Endangerment Finding.”

Pruitt Misled Congress On His Greenwashing of Toxic Mercury:

In his testimony to Congress, Pruitt denied he had ever argued that the EPA should not regulate mercury pollution in his position suing the agency as Attorney General of Oklahoma. Specifically, Pruitt said “there was no argument that we made from the State perspective that mercury is not a hazardous air pollutant under Section 112.”

But the truth is that in legal filings, Pruitt did make the argument that the EPA was breaking the law by regulating mercury and other toxic air emissions. Most damningly, Pruitt signed a legal brief contending that that the benefits of protections against mercury pollution are “small, uncertain and in most instances unquantifiable.”

Strike Three: Pruitt attempted the absurd task of arguing that Mercury is not-toxic and then tried to cover it up.

Conclusion: Pruitt has proven that he is unfit to do the job of protecting the American people from toxic pollution and he misled Congress repeatedly during his confirmation process. For these reasons, he ought to resign. If he refuses, the Senate should take action on its own and remove him from his position.