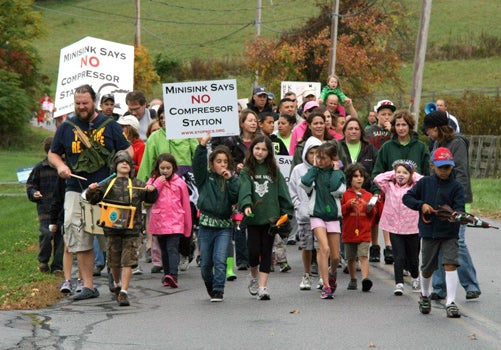 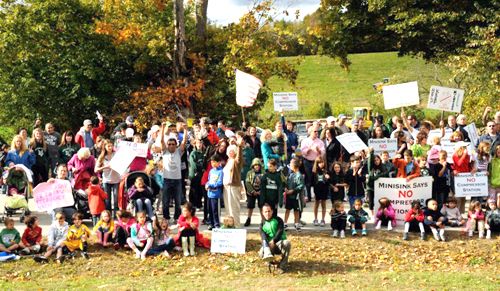 The 16-month battle against the Minisink Compressor project in Orange County, NY, has been ramping up dramatically over the last week, and it appears to be far from over.

Despite the fact that a rehearing is pending, and further litigation is imminent, Millennium Pipeline began construction of the highly contentious natural gas facility on Oct.1. For five consecutive days, Minisink residents have managed to seriously delay construction activities by physically blocking the entrance to the site of the proposed compressor station. Two residents were arrested for disorderly conduct—a father of two young children on Monday and a local farmer on Tuesday.

In a strikingly unusual turn of events, the D.C. branch of the U.S. Court of Appeals issued a temporary stay of the project late Friday afternoon. Millennium has until Oct.9 to respond. Minisink residents will be given an additional business day to counter-respond.

On Oct. 6, residents of Minisink, NY marched for justice in efforts to halt construction activities of the proposed Minisink Compressor Station, in the hamlet of Westtown, NY. Approximately 200 people marched in the rain, with the cooperation of local authorities, from the site of the proposed compressor to the center of Westtown and back. Minisink residents, who adamantly stress their fight is an American issue, not a partisan issue, were heartened by the presence of supporters from all over the Northeast region.

This case is shaping up to be a historic landmark decision, and it will set a legal precedent not only for NY state, but also nationwide.

The plan calls for the siting of a 12,260 horsepower compressor station in the midst of a residential/agricultural zoned community. It’s predicted that the station would release (from two, 52-ft stacks) at least 61,000 tons of pollutants into the air each year, including many known carcinogens and neurotoxins, as turbines compress natural gas into pipelines.

Residents also have serious misgivings about the safety of the proposed facility. Millennium, a subsidiary of NiSource (the company responsible for the devastating compressor station explosion in Artemas, PA last fall), proposes to site the compressor just more than 600 ft. from the closest homes. There are 239 homes within a half a mile from the site and several small organic farms. Minisink has no town police and only volunteer firefighters, should a gas emergency occur at this location. To add insult to injury, Minisink is home to a large community of 9/11 First Responders living with respiratory and other health problems. 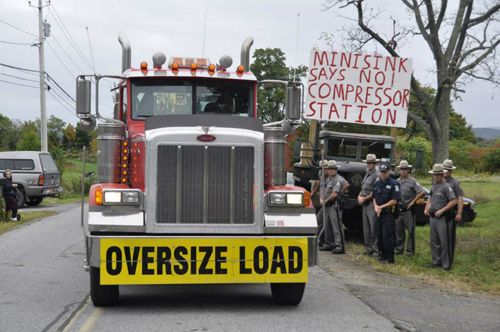 Publicly unveiled more than a year ago by Millennium Pipeline, the Minisink Compressor plan has been met with incredible opposition, largely because there is an alternative plan that ensures dramatically less impact on local communities, farms and the environment. This community-backed proposal is known as the Wagoner Alternative.

The Wagoner Alternative would site a much smaller compressor station—with less than half the horsepower—in an industrially zoned location a half-mile from any home.

Earlier this month FERC issued a tolling order on the controversial project. The agency is taking more time to review the community’s issues, the Environmental Assessment and viability of the Wagoner Alternative. Whether or not a more permanent stay will be issued is unclear at this time.

Carolyn Elefant, the D.C.-based attorney representing the residents of Minisink, believes the community has a higher-than-average chance of having the decision overturned, and Minisinkers are cautiously optimistic.

Meanwhile residents are vowing to defend their community from any construction activity on the highly controversial natural gas project. They say Millennium is rushing the project because they are worried that the FERC ruling may be overturned by a superior court.

The community is calling for immediate action from New York Senators Charles Schumer and Kristen Gillibrand, as well as Representative Nan Hayworth to intervene on behalf of the community to ensure their due process and constitutional rights, and say that industry pressure is the only explanation for the ambiguous FERC rulings.

Minisink residents are prepared to peacefully intervene throughout the coming weeks. Notice of further actions will be publicized as matters develop. Visit Stop the Minisink Compressor Station’s Facebook page for more information.