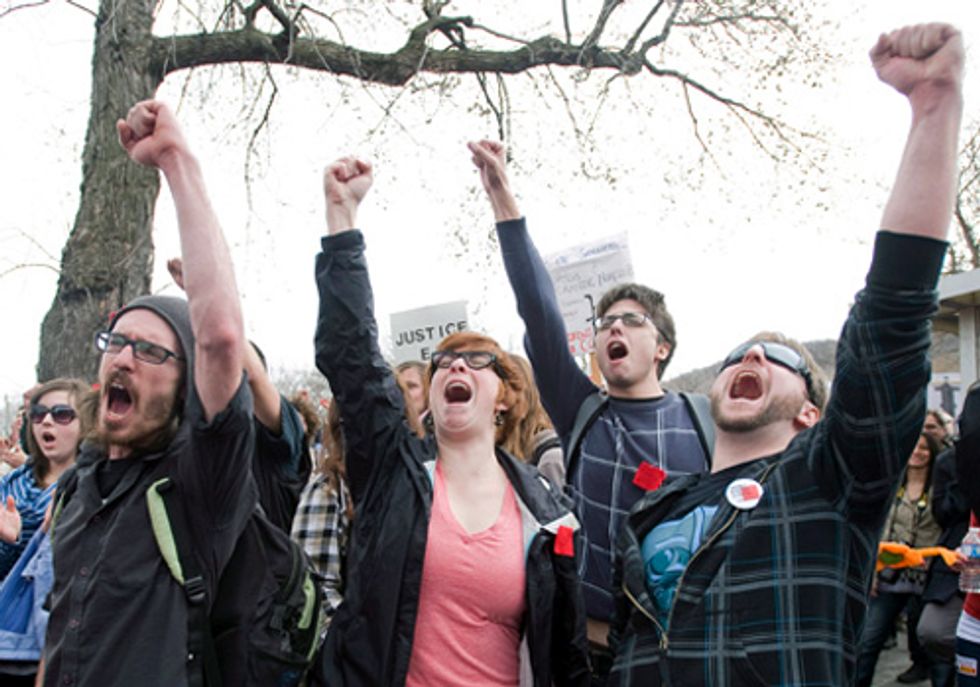 When I heard about the student protests in Montreal, I swallowed the line that Quebec’s pampered youth pay lower fees than those in other parts of Canada but aren’t aware that education costs money. And then I went to Quebec. There, I heard a different story.

After weeks of demonstrations, clearly something more profound is going on. The protesters are forcing us to confront a crucial question: What is government for? Governing is about priorities. Students can’t help but notice they aren’t high on the list.

Governments all across Canada have no qualms about investing vast amounts of money to exploit “natural resources,” yet they all but ignore the most precious, our children. Young people will take charge long after current leaders are gone, and they’ll also be stuck with the ecological, social and economic costs of the decisions we make today.

The increasing challenge of getting a postsecondary education isn’t the only issue motivating people to take to the streets of Montreal. On April 22, Earth Day, 300,000 went outside to celebrate nature. On May 22, tens of thousands spontaneously mobilized to oppose the draconian measures enacted to stop the student protests.

The Montreal protesters are drawing attention to a growing trend: governments often skew decisions in favor of short-term priorities, often for industrial interests. To promote those priorities, government, industry and their supporters try to stifle discussion around the real issues and demonize those who press for change or question the status quo. So, because Al Gore lives in a big house (even though he’s worked at being “carbon-neutral”), he’s labelled a hypocrite, leading anti-environmentalists to make the illogical leap that we should therefore ignore or deny the science of climate change.

This advancement of logical fallacy reached new lows with a blunder by the Heartland Institute, a U.S. climate change denying organization. The Institute launched a billboard campaign implying that because the Unabomber, Fidel Castro and Charles Manson believe in climate change, those who agree with the scientific evidence for global warming must also be tyrants, madmen and murderers. One could as easily, and as wrongly, conclude the opposite on the basis that Anders Behring Breivik, who killed 77 people in Norway on July 22, is a climate change denier who referenced Heartland Institute “experts” in his manifesto!

Heartland aborted its campaign because of massive public outrage and because funders and supporters tried to distance themselves from the organization. But the episode was another demonstration of attempts to deflect rational discussion of important issues such as global warming. And, if even tyrants, madmen and murderers get it, why don’t our politicians?

The Occupy movement also questions priorities, especially those regarding the pro-corporate agendas of many governments. Corporations are not people but they have similar rights and generate vast amounts of money to invest in budding politicians and lobby groups that help sidetrack important discussions.

This sidetracking tactic also pops up with the Enbridge Northern Gateway pipeline project, especially when it comes to First Nations’ concerns. Many coastal and northern communities are desperate for jobs and economic development. Enbridge is offering incentives, including employment, yet coastal First Nations realize that some things are more important than money. Why aren’t we all getting that?

We’re constantly bombarded with the message that jobs and economic growth are government’s highest priority, but the coastal First Nations, Occupy protesters, and Montreal students, among others, tell us the economy and growth are not the end but the means to a better society. A society that values its young people balances industrial and economic development in ways that don’t compromise their future, and makes higher education accessible to all.

Many of us have watched with interest the remarkable “Arab Spring” movement. Although protests and demonstrations here may be about “first world” problems as opposed to the more serious struggle for basic democratic rights in the Middle East, they remind us that we can’t be complacent.

As Canada’s government axes programs and organizations that inform us about the environment and climate change, guts environmental protection measures, and shovels money to promote fossil fuel interests while wilfully ignoring urgent calls from scientists, students, First Nations and tens of thousands of citizens, it’s up to all of us to listen and join the conversation.

Click here to read other articles by David Suzuki.