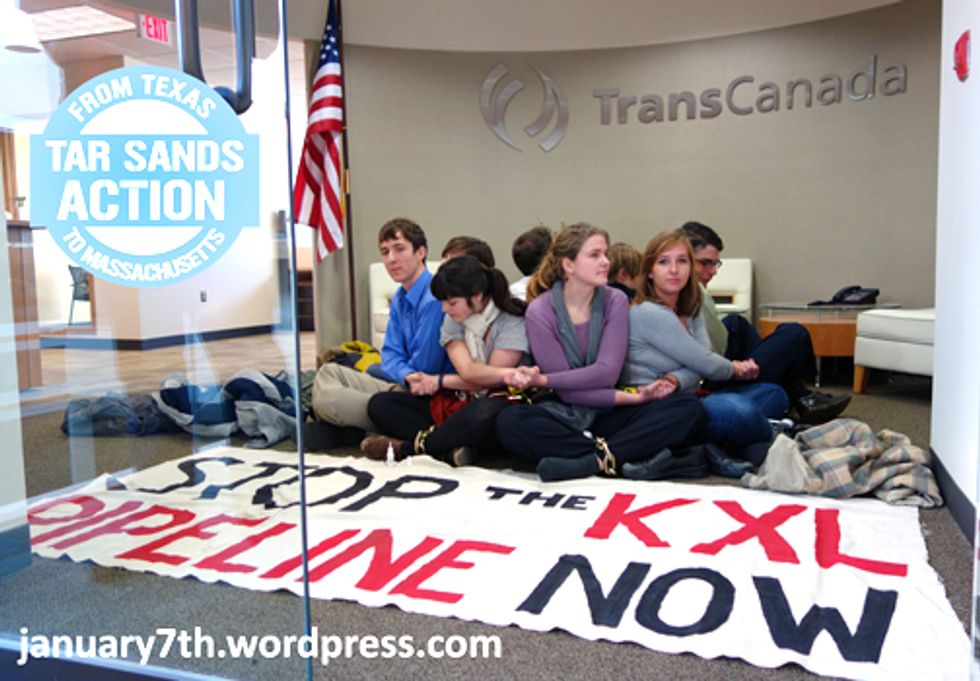 After being forced out of the lobby by police, the protesters gathered on the sidewalk and performed street theatre in which a “pipe dragon” puppet destroyed homes and poisoned water until being slain by knights representing the grassroots coalition of Tar Sands Blockade, Idle No More, Earth First! and others.

Today’s action was the largest yet in the months-long campaign by climate justice organizers and Texas landowners against the pipeline and the first mass action in Houston targeting TransCanada corporate offices directly. It kicks off a new phase of blockade organizing, targeting the corporate, political and financial infrastructure behind the Keystone XL pipeline with solidarity actions planned across the country this week, including in Austin, Detroit and New York City.

Activist collective Anonymous today released the personal information of TransCanada executives and Keystone XL’s financial backers in solidarity with the launch of the Blockade’s new strategy phase. Protesters are currently chained together and actively occupying TransCanada’s offices near Boston.

“From the Texas backwoods to the corporate boardrooms, the fight to defend our homes from toxic tar sands will not be ignored,” said Ramsey Sprague, a Tar Sands Blockade spokesperson. “We’re here today to directly confront the TransCanada executives who’re continuing on with business as usual while making our communities sacrifice zones.”

Last Thursday, a tree blockade near Diboll, TX brought TransCanada’s illegal practices to light, showing that they hadn’t received permission from the county commissioner to build the pipeline through county land.

In addition to land and water concerns, the Keystone XL pipeline is a classic case of environmental racism. In Houston, the low-income neighborhoods near refineries, such as Manchester, whose residents are 90 percent Latino, will have to breathe the noxious wastes of the tar sands refining process.

“We’ve done everything we can to stop this pipeline: we’ve petitioned, rallied and taken direct action. The historic resistance to this pipeline shows how risky an investment this and other tar sands pipelines have become,” said Alec Johnson, one of the office blockaders. “Tar sands oil spilling into our waterways and millions of tons of carbon pollution spilling into the atmosphere means that this industry’s days are numbered.”

Solidarity actions across the country are planned for today and tomorrow. In solidarity with the the Tar Sands Blockade in Texas, students from the Boston area staged a sit-in today inside TransCanada's office to protest big oil’s attempt to lock us into climate disaster with Keystone XL.

Here's a statement from the Massachusetts students explaining why they participated in civil disobedience:

Today we stand together as representatives of a desperate generation who have been forced into this position by the reckless and immoral behavior of fossil fuel corporations such as Transcanada. Our political leaders have failed countless times to stand up to the tyranny of fossil fuel giants and take the necessary steps to solve the climate crisis. Their failures have disrupted and destroyed millions of lives.

In November 2011, the International Energy Agency published a report stating that we would be “locked in” to irreversible global warming within five years unless we dramatically changed the rate at which we were constructing new fossil fuel infrastructure.

Fourteen months have gone by since that five year deadline was set, but still Transcanada presses forward with attempts to build the Keystone XL pipeline. Transcanada’s efforts to build fossil fuel infrastructure—when society’s resources should be invested in safe renewable energy—are dangerous and immoral. The urgency of the IEA report should be enough of a warning, but we also know that full combustion of the Canadian tar sands deposits delivered by Transcanada’s pipeline would be “game over” for the climate.

The Keystone XL pipeline thus represents an intolerable threat to our future. It represents the crippling burdens of disease borne by thousands of Americans, Canadians, and others across the planet who live near sites of fossil fuel extraction, transportation, and combustion, so we stand in solidarity with our friends in Texas who blockade construction to protect communities threatened by the pipeline. It represents the extreme destruction of the climate crisis to which countless millions have already lost their homes, their jobs and their lives, so we stand in solidarity with our friends in New York and New Jersey still suffering from the effects of Superstorm Sandy. It represents the threat of even greater destruction that is still to come from an unabated climate crisis, so we stand in solidarity with all humanity.

Our actions today aim to raise awareness and build momentum to halt the destruction that fossil fuel corporations knowingly cause. Science, and economics and logic provide an obvious imperative for action. However, even overwhelming factual evidence has not compelled our political leaders to stand up to these corporations. Our elected representatives have not yet found the courage to draw a clear line in the sand and prevent the construction of the Keystone XL pipeline.

Today, we hope to present our political leaders with an example of the courage needed to confront the climate crisis by putting our bodies in the way of corporations whose activities threaten our society. Today, we add our peaceful civil disobedience to an accelerating tidal wave of actions, from the farmlands of rural Texas to the steps of the White House, as people across the nation rise up together.