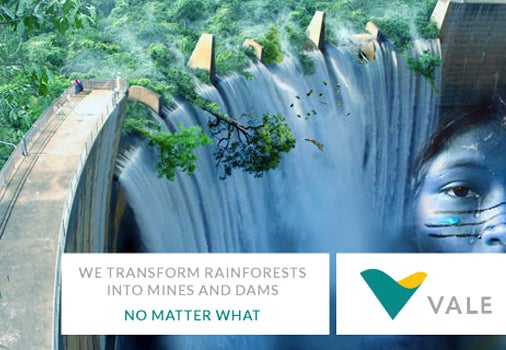 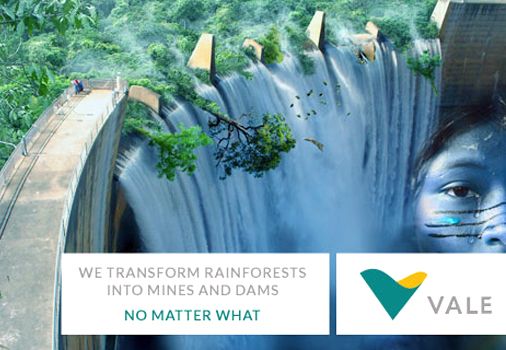 On Wednesday more than 150 demonstrators from communities and workers affected by the operations of Brazilian multinational giant Vale staged a protest at its corporate headquarters in downtown Rio de Janeiro, coinciding with an annual shareholders meeting. Using megaphones to denounce the social and environmental consequences of Vale’s mining and hydropower projects from the Brazilian Amazon to Canada, protesters laid out a trail of red paint along the sidewalk at the building’s entrance, symbolizing more than 100 victims of accidents along Vale’s Carajás Railway in Northern Brazil and other fatalities related to the company’s notoriously unsafe working conditions.

Following protests and the shareholder meeting, social movements and NGOs linked to the International Network of People Affected by Vale launched an alternative 2011 “Unsustainability Report” at a press conference, presented as a “shadow document” to the company’s official sustainability report.

Vale has grown to become one of the most powerful players in the global mining industry and has come under increasing scrutiny from an international network of human rights, labor and environmental activists. Last January, Vale won the Public Eye Award, known as the “Nobel Prize of Shame” in the corporate world, for the company’s record of environmental destruction, social impacts and labor violations, surpassing contenders such as Tepco, responsible for the nuclear disaster in Fukushima.

While a street demonstration ensued outside Vale’s headquarters, six directors of civil society groups participated in the annual shareholders meeting, drawing attention to the gap between corporate discourse on social and environmental responsibility and violations of labor regulations, human rights and environmental legislation. Andressa Caldas, director of the NGO Global Justice, criticized the expropriation and compulsory displacement of more than 1,300 families in Moatize, Mozambique as a result of Vale’s mammoth Moma mining project, contrasting the company’s actions to its discourse regarding so-called “promotion of community development.”

Brent Millikan of International Rivers called for the immediate divestment of Vale’s 9 percent stake in Norte Energia, the consortium responsible for the highly controversial Belo Monte hydroelectric dam in the Brazilian Amazon, due to the enormous economic, legal and reputational risks involved.

Danilo Chammas, a lawyer from Justiça nos Trilhos, a network of communities affected by Vale’s Carajás mines in northern Brazil, called attention to the rising number of deaths and serious injuries related to mining and railroad operations in the region. Gerson Castellano, director of the Petrochemical Workers’ Association in Paraná state, presented data on the growing number of work-related accidents and conflicts with unions and employee representatives. Also present at the shareholders meeting, Carolina Campos of the NGO 4 Cantos called on Vale to abandon plans to develop a huge mining project in Minas Gerais state, in one of the last pristine areas of Brazil’s Atlantic Forest, Serra Gandarela, where a proposal to create a national park is under consideration by the federal government.

According to NGO participants in the shareholder meeting, there were signs that Vale is willing to establish a dialogue on social and environmental responsibility. However, many questions remained unanswered, such as the criteria used by Vale to justify its decision to purchase a major stake in Belo Monte. According to Caldas, the lack of robust analysis of social and environmental risk has led in involvement in boondoggles such as the TKCSA mining project in Rio de Janeiro. In answer to questions about the project, Vale General Counsel Clovis Torres stated that Vale disagrees with the policies of TKSCA, have has no power over management, since it is a minority shareholder. When asked why Vale didn’t simply divest, Torres claimed “nobody wants to buy our shares.”

While maintaining the same basic structure as the Vale’s official sustainability official report, that follows the guidelines of the Global Reporting Initiative of the UN Global Compact, the “Unsustainability Report” presents facts and figures regarding such issues as labor relations, occupational health, communities, emissions and waste management. Regarding environmental issues, the report highlights a significant increase in deforestation related to Vale’s operations in the Amazon, as well as an increase in greenhouse gas emissions of 70 percent between 2007 and 2010; during the same period, 76 million tons of liquid effluents and 446,000 tons of solid waste were generated.

In relation to worker and public safety in Vale’s mining operations, the report notes 11 deaths and 124 serious accidents along the Carajás Railroad. The report also argues that reductions in investments in worker safety were directly related to accidents that killed two Canadian workers last year at Vale’s Sudbury mine.