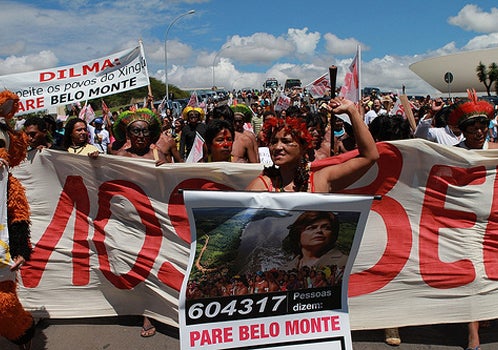 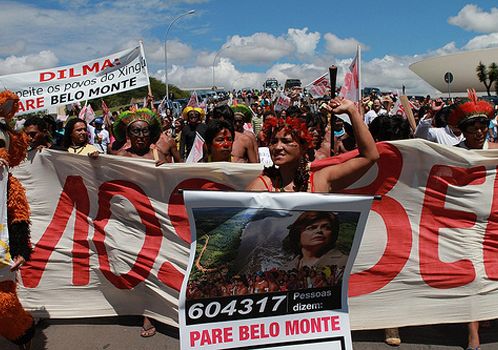 Major construction on the Belo Monte Dam commenced on the Xingu River during Brazil’s New Year holidays, signaling a new phase in the Brazilian government’s intentions to sidestep environmental legislation and human rights conventions to build the world’s third largest hydroelectric dam in the heart of the Amazon. The project’s first blockades of the river, known as coffer dams, are being built to dry out a stretch of the river, allowing for its permanent damming. Local protestors paralyzed construction at the dam site Jan. 18, affirming that resistance to the project is far from over.

The protests centered on Belo Monte’s Pimental work site, where protestors denounced “unprecedented crimes” of the Brazilian government against the Amazon and its people. Organized by the Movimento Xingu Vivo para Sempre (Xingu Forever Alive Movement)—a grassroots coalition of social movements, indigenous groups, and NGOs—the protest included fishermen, farmers, students and other groups that are suffering the impacts of the Belo Monte Dam project.

The protestors arrived at the dam site by boat, unfurling banners in front of the coffer dams with slogans such as “Belo Monte—crime of the Federal Government,” blocking the movement of workers and machinery, and paralyzing construction for more than two hours. The protestors spoke peacefully with construction workers, explaining the motivations for the protest.

“Despite the criminal operations that are Belo Monte, where the Brazilian government is spending billions to devastate the Xingu while creating a situation of complete chaos among local communities, we will continue to resist this monstrosity and work to call attention of the Brazilian public and the world that this wanton destruction of the Amazon will hurt us all,” said Antônia Melo, coordinator of the Xingu Vivo movement. “To take away the river is to take away the life of its people, because water is life.”

The first of three coffer dams, which are earthen walls built to dry out stretches of the river to open the way for dam construction, will connect the left bank of the Xingu to Pimental Island in the middle of the river. The Norte Energia (NESA) dam-building consortium has also begun to raze the jungle on the island after receiving authorization from the federal environmental agency IBAMA to clear cut more than 5,000 hectares of rainforest.

Local residents were not previously informed by the government-led NESA consortium of the impending construction of the coffer dams, initiated soon after the New Year. Instead, they were alerted by a Xingu River tinged with red mud and the thundering of dynamite exploding in construction areas.

“When we learned what they were doing, it practically killed us with sadness,” said Josinei Arara, a member of a threatened Arara indigenous community 10 miles downstream on the Xingu from the Pimental dam site. “The dam builders have kept none of their promises to compensate our village. In they meantime, they’re assassinating our river.”

Outraged with the muddying of water they rely upon for drinking, cooking, and bathing, the Arara denounced NESA’s pollution of the river to Brazil’s Federal Public Ministry this week, also citing the clear deficiency of legally-mandated mitigation measures.

If construction continues, the Belo Monte Dam complex will divert 80 percent of the Xingu River’s flow into an artificial canal and reservoir, devastating a riverine ecosystem of unique beauty and biodiversity, as well as the livelihoods of three indigenous tribes and other traditional communities.

“The building of coffer dams, traversing one of the main channels of the Xingu, is already a major intervention in the riverine ecosystem,” said Brent Millikan of International Rivers. “Besides destroying habitats and interfering in the river’s hydrology, coffer dams create obstacles for local boat transportation and the movements of fish.”

The Rousseff administration has remained obstinate in pushing ahead with Belo Monte, ignoring criticisms from scientists, legal experts, religious figures, artists and street protests throughout Brazil and the world. The Inter-American Commission on Human Rights, linked to the Organization of American States, was scoffed by the Brazilian government when it issued precautionary measures issued by the to ensure consultations with indigenous peoples and protection of their rights. Meanwhile the Rousseff administration has pressured judges to stall or overturn legal actions against Belo Monte, while intimidating federal public prosecutors that issued them. The Belo Monte Dam is one of the first of dozens of large dams planned for construction in the Amazon by the Brazilian government.