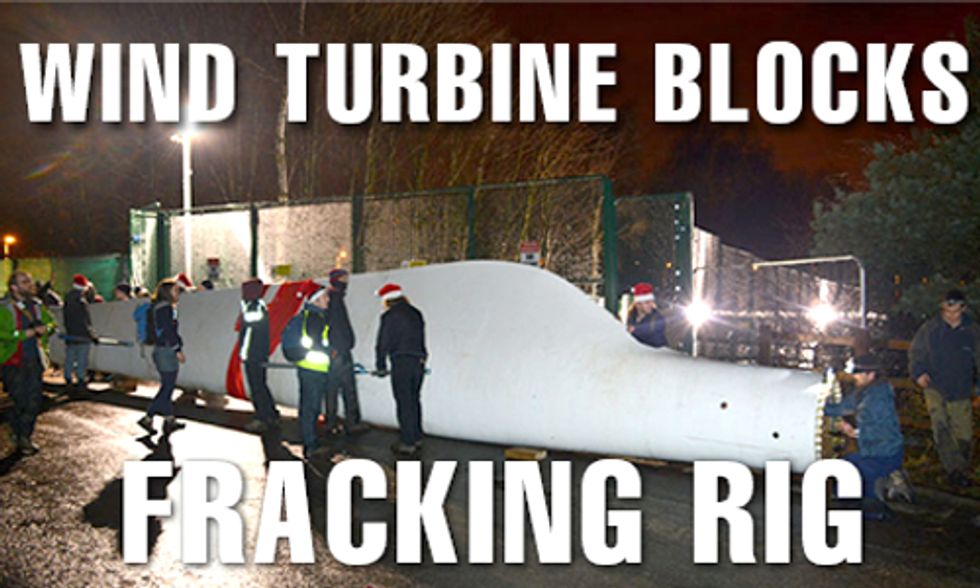 At 5.30 a.m., fifty people blocked the entrance to IGas’s exploratory drilling site in Salford, a metropolitan borough of GreaterManchester in North West England, with a giant wind turbine blade. The campaigners arrived at the site and unloaded and assembled the 17-meter blade from its three component segments. They were spotted by a security guard who called the police, but the officers who arrived on the scene were too late to prevent the blockade from having the wind turbine blade set up.

The campaigners then left, leaving the heavy blade in place across the entrance, complete with a large red Christmas bow. All vehicle access to the site is disrupted by the 1.5-ton blade, which cannot be moved without large numbers of people or special equipment.

“The government’s plan to increase our reliance on gas—including fracked gas—would lead to higher energy bills and more pollution," said Rachel Thompson of Frack Free Greater Manchester. "The only reason they’re going down this path is because of the power and influence of the big energy companies."

“The big six can make far bigger profits from fossil fuels than from clean energy or home insulation schemes, which is why they’re using their cosy relationship with government to block renewable alternatives and keep us all burning their expensive gas," Thompson continued. "That’s why we all need to stand up for a fairer, cleaner, more democratic energy system without the big six profiteers in charge.”

IGas has obtained permission to drill a 3,000 meter (10,000 foot) test well at Barton Moss in Salford, in hopes of extracting both coal bed methane and shale gas. If the tests prove successful, IGas would then be likely to use the controversial extraction method of horizontal slickwater hydraulic fracturing or fracking.

In the U.S., where fracking has been underway for several years, the practice has been linked to water contamination, air pollution and risks to local water supplies, with more than 1,000 leaks and spills reported in one year in North Dakota alone. If fracking were to spread across the UK, it would lead to the extraction of large amounts of oil and gas that would otherwise have remained in the ground, with serious consequences for the climate.

Complete with a red Christmas bow, anti-fracking protestors left a wind turbine blade blocking access to the site as a gift for the fracking company, IGas. Photo credit: No Dash for Gas

The fracking industry itself has admitted that the practice is unlikely to bring down energy bills, and economist Nicholas Stern has accused the government of “baseless economics” for claiming otherwise. Meanwhile, the government’s own Committee on Climate Change has released a report showing that a shift away from fossil fuels to renewables and energy efficiency could save the UK public £85 billion per year.

Following a summer of high-profile anti-fracking protests at Balcombe in West Sussex, which ended when the drilling company Cuadrilla withdrew its fracking application, Barton Moss is now widely seen as the new frontline in the battle for clean energy in the UK, and in Nov. 2013 a “Barton Moss Protection Camp” was set up at the site.

Actions are frequently launched from the camp to disrupt drilling activities at the site, and at least 10 people, including local residents, have been arrested in the last few weeks. This year’s anti-fracking protests seem to have shifted public opinion. According to national polling by the University of Nottingham, support for fracking dropped significantly after the summer protests at Balcombe.

Today’s action was carried out by a group of people from all over the UK who had been inspired by the Reclaim The Power protest camp at Balcombe earlier this year.

“We’ve delivered this early Christmas gift to IGas to remind them that we don’t need damaging, risky and polluting energy sources like oil and gas to power the UK," said Sandra Denton, who was one of those who put the blade in place. "The government and the big energy companies are planning to build a new wave of gas-fired power stations, partly fed by thousands of fracking wells across the British countryside."

"This would lock us into using this expensive and dirty fossil fuel for decades to come, trapping us in a future of spiralling energy prices and disastrous floods, storms and droughts as climate change kicks in," Denton said. "Meanwhile, a shift to properly insulated homes powered by clean, community-owned or publicly-controlled renewable energy would rescue millions from fuel poverty, prevent thousands of winter deaths and give us all a decent chance at avoiding runaway climate change.”

“I didn’t know today’s action was going to happen but I’m very glad it did," said Pearl Hopkins, a local resident. "It’s great that people are coming from all over the country to support us at Barton Moss—and with creative blockades like this one."

"Local people have tried using all the official channels to object to this scheme, but the council and IGas seem determined to brush our concerns under the carpet and carry on regardless," Hopkins explained. "We’d like renewable energy for the future—not the destruction of our towns and countryside with thousands of drill sites.”