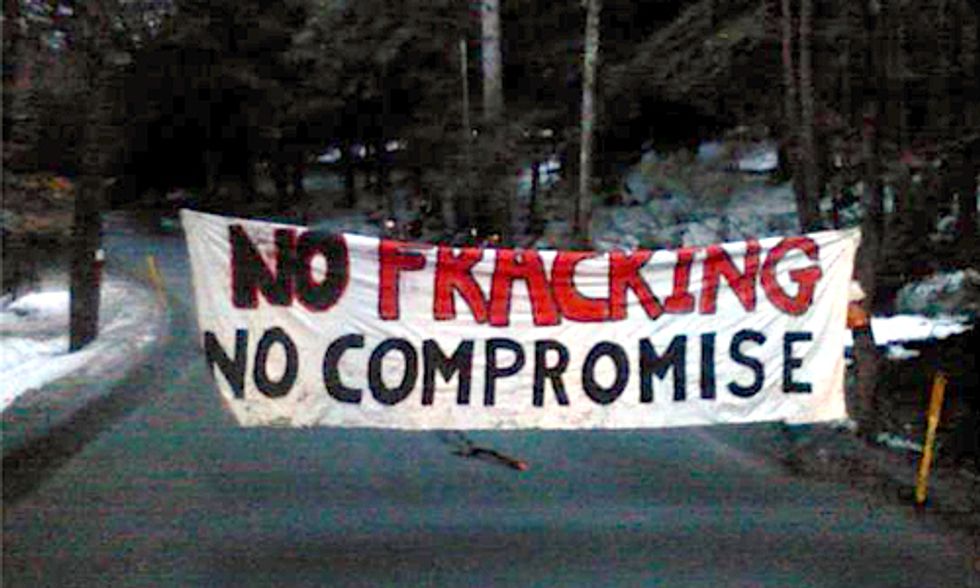 In the pre-dawn hours, activists with Marcellus Shale EarthFirst!, Pennsylvania residents and students took action to halt Anadarko's fracking operation in the Tiadaghton State Forest. Protestors blocked the only access road to a wellpad by locking themselves to barrels of concrete, preventing workers from entering the site. At this time the police have placed at least two people in handcuffs and one person has been cut out of the blockade. The activists are demanding an immediate halt to all plans for new drilling on Pennsyvlania's public lands.

All the blockaders have been removed after blocking the wellpad for 4 hours. A solidarity rally was held at Anadarko's corporate offices in Williamsport, PA. Photo credit: Tom Jefferson /Marcellus Shale Earth First!

“The public lands of Pennsylvania belong to all Pennsylvanians,” said Michael Badges-Canning, retired school teacher from Butler County who attended the protest. “It is my obligation as a resident of the Commonwealth and a grandparent to protect our wild heritage, our pristine waters and the natural beauty for my grandchildren, Dougie and Lochlin.”

Gov. Corbett (R-PA) has recently issued an executive order to open Pennsylvania’s remaining public lands for fracking. This includes state forests that have been off limits to gas companies since 2010, when then Gov. Rendell declared a moratorium on any new leases. The moratorium came in the wake of a Pennsylvania Department of Conservation and Natural Resources (DCNR) study that concluded no remaining state owned lands were suitable for oil and gas development without significant surface disruptions. Gov. Corbett’s current move to lift the multi-year ban ignores the negative effects that new leases will have on Pennsylvania’s most ecologically sensitive forests, including those where species are at risk.

Anadarko’s proposed development of the Clarence Moore tract, part of the Loyalsock Forest, has become the center of the grassroots campaign to defend Pennsylvania’s remaining wild places. Local residents packed DCNR hearings in protest of Anadarko’s plans, leading to the ousting of former DCNR secretary Richard Allan. According to PA Department of Environmental Protection’s Oil and Gas Compliance Report, Anadarko has been cited with nearly 250 violations over the last five years, ranking the company in the top three percent of violators statewide.

“As a lifelong resident of Pennsylvania, I feel a moral responsibility to protect my home from the malicious onslaught of an industry with a track record of environmental degradation and human rights violations,” said Danielle Dietterick with Marcellus Shale Earth First!. “Our Governor's complicity has proven he is an industry pawn who can ignore the words of our state constitution and the desires of those who he is supposed to represent.”

Residents of Pennsylvania have shown that they will not give up their wild places without a fight. In July 2012, nearly 100 activists with Marcellus Shale EarthFirst! Forced a 70-foot-tall EQT fracking drill rig to suspend operations for 12 hours in the Moshannon State Forest. Last fall, students from around the country rallied with Allegeny County residents in Pittsburgh to oppose County Executive Rich Fitzgerald’s plan to open up county parks to fracking. Marcellus Shale EarthFirst! has vowed to prevent any new shale gas development in the Loyalsock State Forest.