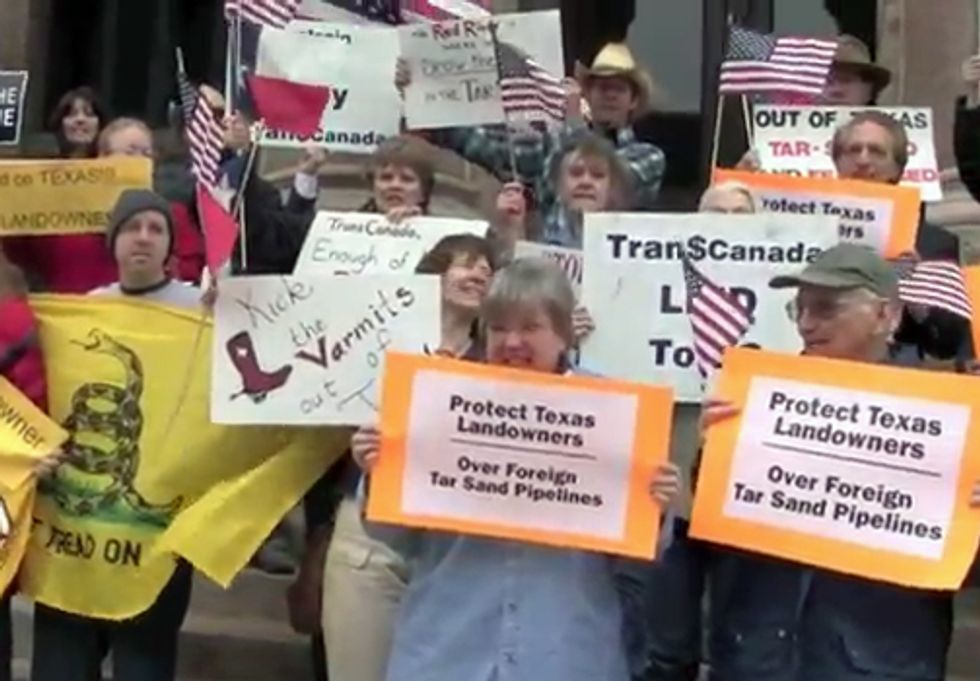 As Congressional Republicans and Big Oil allies allies in Washington try to resuscitate the massive Keystone XL tar sands pipeline, people on the frontlines have opened a new campaign to stop the massive $7 billion project. In Texas, landowners are locking arms to fight would-be pipeline builder TransCanada over eminent domain cases that may determine where the 1700-mile project will be built.

On Friday, protesters gathered in Paris, TX, and in Austin to voice their support for Lamar County farm manager Julia Trigg Crawford, who runs a 600-acre farms that grows corn, soybeans and wheat along the Red River near Paris, TX. More than 50 protesters traveled from nearby counties to wave flags and signs on the Lamar County courthouse steps, shouting slogans like “Don’t mess with Texas” and “This is what democracy looks like.”

Check out this video of the protest and interview with Julia Trigg Crawford:

The raucous protest included an unusual mix of tea party supporters, independents, Democrats, Republicans and even Occupy Dallas protesters. They were all there to support Crawford’s eminent domain court fight with TransCanada, which wants to run the Keystone XL pipeline through her property.

David Daniel, a landowner near Winnsboro, TX, has been fighting TransCanada for four years over their plans to run the pipeline though his wooded, spring-fed land near Winnsboro, TX. Daniel says he learned about the plan only after the company had already come on to his land and staked out its pipeline route, a route he says will threaten natural springs that communities depend on for drinking water.

“The more people find out about the safety risks and that the oil will be exported, the more they are opposed. People in Texas are used to oil pipelines, but this one is different. It’s more toxic and more dangerous and threatens our groundwater. A lot of people feel they’ve been lied to.”

Daniel, who helps run a Keystone XL pipeline opposition group called Stop Tarsands Oil Pipelines, says local landowners are not going to give up, even though they are vastly outspend by TransCanada and its oil industry supporters.

From the looks of those who attended the rally on Friday, TransCanada has a big fight ahead with some angry folks in the Lone Star state. You don’t mess with Texas without getting one.